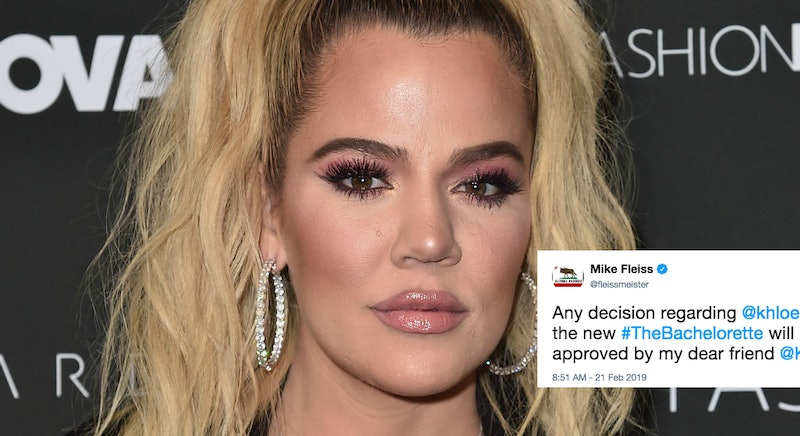 Could a member of the Kardashian-Jenner family star on The Bachelorette? Based on some new tweets this week, it might not be as far-fetched as it sounds. Fans want Khloé Kardashian to join The Bachelorette. And Bachelor creator Mike Fleiss and host Chris Harrison have weighed in on the topic, so anything is possible at this point.

Kardashian and Tristan Thompson have parted ways, E! News and Us Weekly confirmed this week. And now that Kardashian is single, fans are already suggesting ways she could find a new romantic partner. (The reality star hasn't issued a statement about the breakup, but Kardashian's recent Instagram activity seems to allude to the split. She shared several quotes about "pain" and "betrayal" on Thursday morning, along with a drawing of a woman shedding a tear.)

Of course, even though Kardashian and Thompson have split, that doesn't mean she necessarily wants to start dating again, or that she would want to do so in such a high-profile and public way. But if she did decide to join the ABC series, it sounds like she'd have plenty of support from the show's producers.

"Any decision regarding @khloekardashian as the new #TheBachelorette will need to be approved by my dear friend @KrisJenner ...," Fleiss tweeted on Thursday. The message came after he asked fans earlier this week who they wanted to be the next Bachelorette. A good number of fans suggested Hannah Brown, who competed for Colton's heart on The Bachelor's current season, but some fans suggested Kardashian, too.

Fleiss even tweeted that Kardashian is "very much in contention" to be the next Bachelorette. And while he might have been joking, it looks like fans are getting their hopes up. "I would literally love every bit of that," one person responded. "Yes please! She deserves love," another fan tweeted.

Harrison also waded into the conversation, retweeting a message from Us Weekly about the Khloé-for-Bachelorette conversation. "Hey #BachelorNation should we discuss this?," Harrison tweeted.

And at least two prominent Bachelor Nation members are already on board. Tanner Tolbert responded to Harrison's tweet, simply writing, "Yes." Amanda Stanton also responded to one of Fleiss's tweets, writing, "Please can you make this happen?!"

Derek Peth joined in on the fun, too.

Some other fans were excited, too, although a number of people also responded "no" to Harrison's tweet.

Another fan suggested there should be an entire celebrity Bachelor franchise. Believe it or not, that actually almost existed, and it even had a Kardashian connection. In 2017, Rob Kardashian was in talks to star in a Bachelor-like series called Rob's Romance, Life and Style reported at the time, but the show never materialized.

Aside from Rob's almost-show, there are a few other connections between the Kardashian-Jenners and Bachelor Nation, too. Former Bachelorette star Rachel Lindsay spent time with Kris Jenner in 2017, apparently visiting the legendary momager's kitchen.

And while it's not technically a Kardashian-Jenner connection, Kendall Long has a twin named Kylie, which is a pretty funny coincidence. Kendall Jenner loves The Bachelor, too, saying in an E! News video last year that she's cried while watching the show.

Khloé Kardashian being on The Bachelorette would be a pretty big stretch. But then again, stranger things have happened. And if it's something she really wanted to do, it sounds like producers could make it work. It would definitely be a ratings boon for the franchise, although it could also bring in plenty of competitors who weren't there "for the right reasons." But if this did end up coming to fruition, it sounds like Kardashian would have plenty of support from both her fans and the rest of Bachelor Nation.