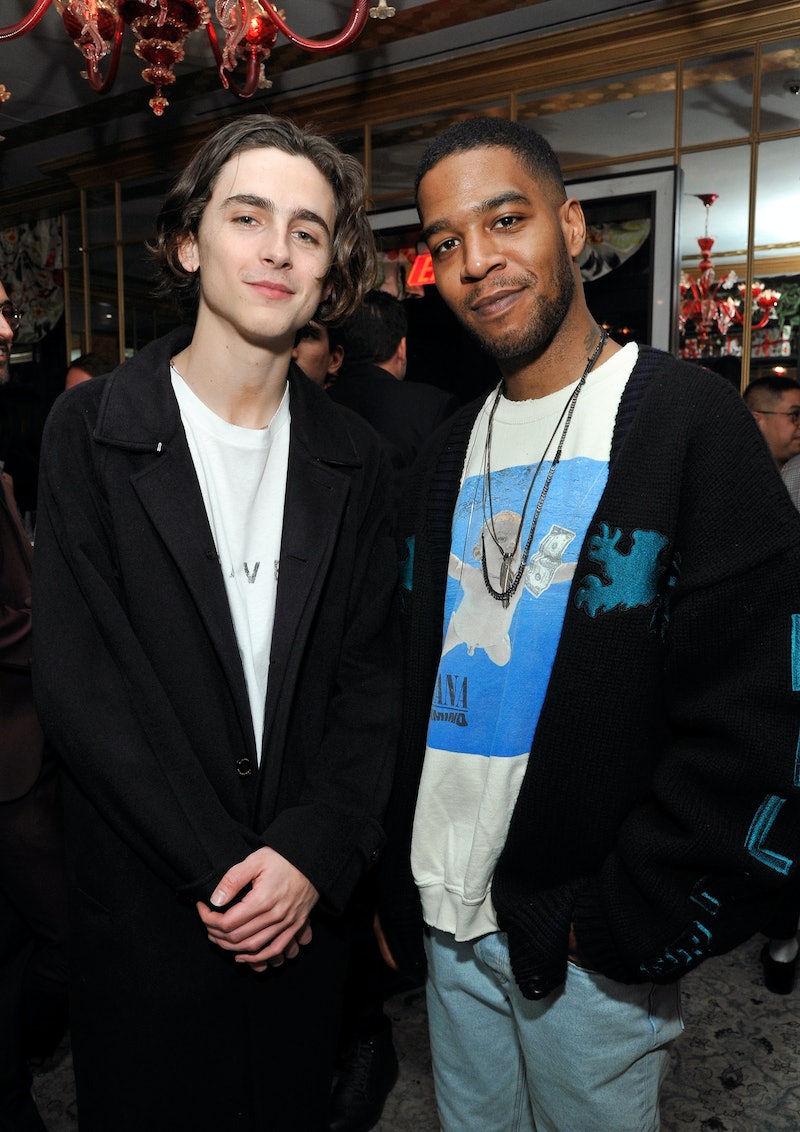 Kim Kardashian recently posted some photos to her Instagram Stories that will probably send your jaw plummeting to the floor. No, she didn't do or say anything unusual, shocking, or controversial. No drama, no shade. So, what's the big deal? Kardashian shared three photos of Kid Cudi, Kanye West, Pete Davidson, and Timothée Chalamet hanging out together for Cudi’s birthday, as Us Weekly reported. You may be wondering, wait, how did they all end up in the same room? Well, as it turns out, it actually makes a lot more sense than you'd think.

Now, this is definitely going to take some explaining. It's not quite as complicated as, say, brain surgery — but it's not as simple as something like, "They're all from the same place," or "They all have the same agent," or "They're all dating a Kardashian-Jenner." Obviously, they all know Cudi — but how?

West and Cudi have been collaborating on music together for more than a decade. They first crossed paths at a Virgin Superstore way back in 2006, according to SPIN, where West initially declined to listen to Cudi's tracks. In response, Cudi told West, "I said, 'We’ll be working together one day soon.'"

Their first collaboration came on 2008, when Cudi was asked to co-write a few songs on West's 808 & Heartbreak. Most recently, they released an eponymously titled album together as hip-hop duo Kids See Ghosts.

Davidson's love for Cudi runs deep. Shortly after Cudi reportedly checked himself into rehab in October 2016 for "depression and suicidal urges," Davidson openly credited the rapper and his 2009 album, Man on the Moon, for getting him through hard times. "If you’re 25 and under, I truly believe that Kid Cudi saved your life," Davidson said on The Breakfast Club morning show.

Later, Cudi included Davidson in a Facebook post that thanked his biggest supporters by name — such as West, Travis Scott, and Pharrell Williams, among others. "Thank You for opening your hearts and extending your love and support during a troubling time," part of the post read. "I wanted to let yall know it meant the world to me. I have nothing but love for you."

Cudi has long-been one of Chalamet's "personal gods," according to an interview the actor did with GQ in February 2018. They've crossed paths a few times together over the last several years, but it seems as if their friendship may have really taken off after Cudi admitted his mutual appreciation for the actor.

When a fan on Twitter asked the rapper, "who's your favorite artist right now ?" in March 2018, Cudi responded by tagging @RealChalamet. Simple, straightforward, no explanation offered.

Chalamet hilariously had zero chill when he got wind of this, replying, "UHMMM OKAY STRIKE ME THE F*CK DOWN." The two continued to have a pretty adorable back-and-forth exchange on Twitter, which apparently has turned into a full-fledged friendship today.

On top of all that, there's also a connection between Davidson and West, and it's recently changed pretty drastically in nature. Back in September 2018, West performed on Saturday Night Live and went on a lengthy pro-Trump rant post-show. The following week, Davidson called out the rapper during a segment on SNL's Weekend Update. "What Kanye said after we went off the air last week was one of the worst, most awkward things I’ve seen here," the cast member admitted.

In December, though, Davidson defended West after Ariana Grande seemingly made light of West's feud with Drake on Twitter — which West later said, "weighed on [his] mental health," according to Page Six. (Grande later apologized, saying in part, "it was a joke which i understand now was probably insensitive. i apologize if i was in any way triggering and hope u feel well today.") In an Instagram post that has since been deleted, Davidson wrote, "We need people like Kanye. No one should ever point fingers at you for your bravery in speaking about mental health."

After all of that, it appears that they're all in a much better place now and everybody's cool with everybody. That's how it seems in Kardashian's pictures at least. Now those photos don't seem quite so random after all, do they?