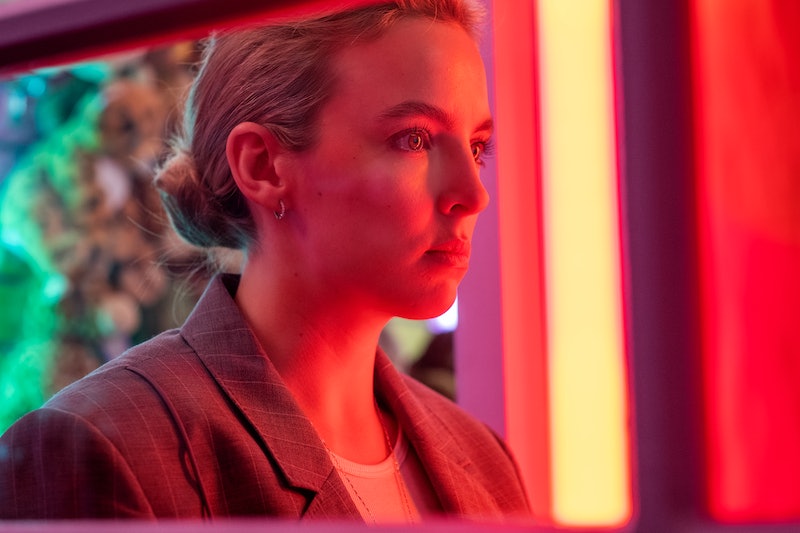 Spoilers ahead for Season 3, Episode 3 of Killing Eve. Killing Eve is tightrope TV; its characters’ motivations and intentions are always half obscured. Take Villanelle (Jodie Comer), who in the most recent episode encounters Eve (Sandra Oh) for the first time since shooting her in the back at the end of Season 2. Before they rendezvous, Villanelle tells a parfumier she wants to smell like a “Roman centurion,” — one "who is coming across an old foe who in battle once hurt him greatly,” she says, perceiving the hurt in the opposite direction. “Since then, the Roman centurion has become emperor and is now powerful beyond measure.” Villanelle may be a sociopathic assassin-for-hire, but what she's describing is the olfactory equivalent of a revenge-body fantasy. At least to her own mind, Villanelle’s the victim.

For BAFTA and Emmy-winning actress Jodie Comer, who plays the self-indulgent Villanelle with sensitivity, it’s this nuance that keeps her feeling challenged. Villanelle does terrible things — in this episode alone she racks up 3 murders and 1 kidnapping — but Comer can’t help admiring other sides of her: “I love her honesty for one. That ability to say how you feel in a moment with no care for consequence.”

Comer is also thoughtful about what a life of organized crime has ultimately cost Villanelle. The flip side of a conscience-less ability to kill, perhaps, is a clumsy longing for human connection. “But she just gets in her own way, because she's programmed in this way that is not like other people…. especially in this season, we delve into that a little bit more.” This mis-programming is on display this week, when Villanelle makes Eve a personalized talking teddy bear, cycling through the things she wishes she could say to the woman at the center of her fantasies — some of them lusty, some of them murderous. “I should have shot you in the head and watched you die,” Villanelle says into the microphone. But just the act of uttering it out loud, softens her. It isn’t true. Villanelle tries again: “I can’t stop thinking about you.”

Negotiating the balance between the honest and the absurd is at the core of what interests Comer. “There's a very fine line of Villanelle becoming a caricature," she says. For every scene where Villanelle does something callous, like stealing a mark’s baby for her own amusement before leaving him in a trash can, Comer craves relatable moments to keep the character grounded. This season, they often come via Villanelle’s unconvincing attempts to climb the corporate ladder. She has a very human habit of “falling for people’s bullsh*t,” as Comer puts it. Her handlers promise that if she complies with orders, she’ll get what she wants. “And she never gets it,” Comer says sympathetically. “But she always believes it.”

Still, Comer is conscious that even for a character as surprising as Villanelle, evolution is critical. The audience won’t be surprised by the same spoiled tantrums and gruesome kills forever. “People know what’s coming; the element of surprise is gone,” she tells me. What’s so unexpected in Season 3 isn’t how powerful Villanelle is, but how inconsequential. “She has to accept that she is a very small cog in a wheel.”

Except, of course, in her relationship with Eve, who seems to crave her even after their bloody showdown. “Admit it, Eve, you wish I was here,” is the message Villanelle finally lands on for the sparkly pink talking teddy bear — a gift so invasive and deranged it makes sense between these characters walking the tightrope between enemies and attraction. “Eve doesn't question her or tell her what she should and shouldn't be doing,” says Comer, differentiating between the other dominant relationships in Villanelle’s life — the ones she has with her handlers Dasha and Constantin. “I think there is some crazy understanding.” And Comer’s right. When Eve finds the bear, planted in her flat while she was out, she frantically tears the heart-shaped recording device from the stuffed animal’s innards.

Then, she plays the message again.

More like this
It’s Official: 'The Bachelorette' Is No Longer A Fairy Tale
By Samantha Allen
Watch The Trailer For Netflix’s Edgy New Comedy 'FAKES'
By Brad Witter
Here’s The True Story Behind 'A League Of Their Own'
By Morgan Leigh Davies
Does 'Locke & Key’s Ending Mean There Could Be A Season 4?
By Sophia Moore
Get Even More From Bustle — Sign Up For The Newsletter