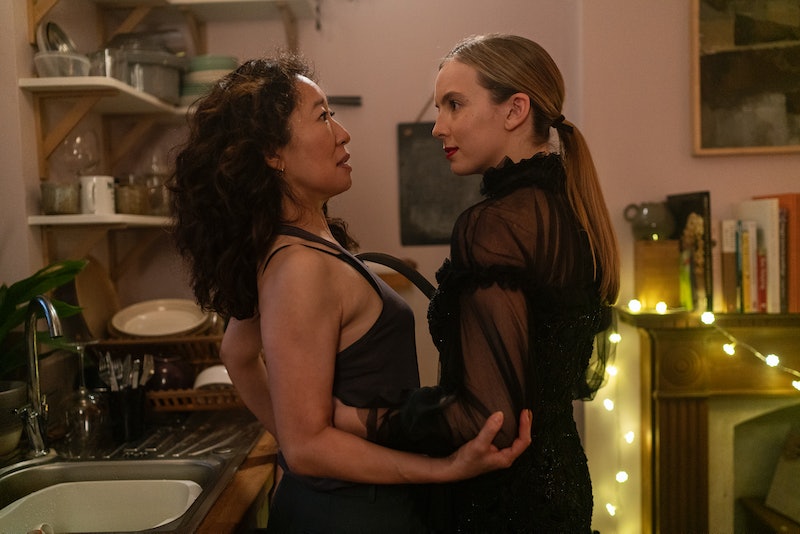 Before TV's most erotically charged cat and mouse game returns for a third season, you might want to take a moment to recap Killing Eve Season 2. So much has happened in the world in the 11 months since the Season 2 finale aired (heck, so much has happened just in the last month) that you can be forgiven if you're a bit fuzzy on the exact details of the The Twelve, MI6, the Ghost, and the twisted relationship between secret agent Eve Polastri and super assassin Villanelle.

In Season 1, Eve became convinced that many seemingly unconnected assassinations were actually the work of one woman — and was recruited into MI6 by Carolyn Martens to help track her down. Eve and Villanelle each became fascinated with the other, and slowly circled each other until an explosive meet-cute in Eve's kitchen. By the end of the season, Villanelle had killed Eve's old MI5 boss (who was actually a mole), and been hired by The Twelve to off her own handler, Konstantin (who was actually having an affair with Carolyn, whom he knew from her days working in Moscow during the Cold War). After shooting Konstantin, Villanelle and Eve met up once more… and just when it seemed like the unlikely pair might consummate their attraction, a terrified Eve stabbed Villanelle in the gut.

Season 2 picked up in the wake of that bloody affair, with an injured Villanelle on the run and a frantic Eve once again hunting the object of her obsession. Here's what happened to each character in Killing Eve Season 2.

After stabbing Villanelle, Eve returns home only to be quickly recruited back onto a secret task force by Carolyn (who had fired Eve in the Season 1 finale for exposing her affair with Konstantin) to help solve the murder of one Alistair Peel. Eve soon deduces that the murder was the work of another female assassin, dubbed the Ghost — because she was every bit as subtle as Villanelle was flamboyant.

After apprehending the Ghost, Eve comes up with the brilliant idea to get Villanelle to interrogate the assassin, and puts a hit out on herself to draw Villanelle to her. Villanelle is successfully able to get the information that the Ghost was hired to kill Alistair Peel by his own son, Aaron.

After being stabbed by Eve, Villanelle flees into the streets, and throws herself in front of a taxi so the driver would take her to the hospital. There, she rooms with a young teenager whose entire family had died in a car crash. After telling her he wished he'd died in the crash with them, Villanelle snaps the kid's neck and escapes the hospital.

She then finds a nice man to take her in… but when it turns out the nice man is actually a psycho, Villanelle calls both The Twelve and MI6 for help — but is told that Eve was no longer with MI6. After killing the man and escaping his house, Villanelle meets her new handler, the sadistic Raymond.

Although he was seemingly gunned down by Villanelle in the Season 1 finale, it's quickly revealed that Konstantin is still alive — and shacking up with Carolyn, who helped him fake his death and put his family under protection (although Konstantin has no idea where they are). Konstantin leaves to find Villanelle, and convinces her to leave The Twelve behind and freelance with him.

After learning that Aaron Peel was behind the Ghost's murders, Carolyn approved of an operation to get close to the billionaire by putting Villanelle undercover as a bored rich girl named Billie, who befriends Aaron's sister Amber at Alcoholics Anonymous. "Billie" intrigues the domineering Aaron, who invites her to his manor in Rome. Carolyn sends Eve to supervise Villanelle's intelligence-gathering mission, warning Eve not to let Villanelle kill anyone.

Carolyn's hacker son and Eve's confidant grew ever more concerned with Eve's erratic actions, protesting that she was putting herself in danger by continuing her obsession with Villanelle. When he objects to Eve putting out a hit on herself to attract Villanelle, Eve finally has enough and fires Kenny. Before she leaves for Rome, loyal Kenny begs her not to go — but Carolyn interrupts before he can elaborate on his warning any further.

Before heading off for Rome, Villanelle made sure to interfere with Eve's love life. She tracks down her husband Niko while he's chaperoning a school field trip and tells him the truth about her relationship with his wife — their mutual obsession, the stabbing, everything. He leaves Eve and moves in with fellow teacher Gemma, who has a huge crush on him.

Villanelle approaches them again to make sure that Niko has left Eve for good, but when Niko admits he doesn't love Gemma and still loves Eve, Villanelle tells him that was the wrong answer. Next time Niko wakes up, he's sitting next to Gemma's suffocated corpse.

Eve goes to Rome with fellow agent Hugo to surveil Villanelle as she goes undercover as Billie. One night in their hotel room, Eve sleeps with Hugo as she listens to Villanelle pleasure herself through her earpiece. When some goons find their hideout, they shoot Hugo; rather than getting him help, Eve cold-heartedly leaves him bleeding out on the floor as she rushes to Villanelle's aid instead.

While locked up in Aaron's manor, Villanelle discovers that not only did he hire the Ghost to murder for him, but the tech genius enjoyed doing some murdering himself, and killed other women in the very bed she's sleeping in. Aaron reveals that he's selling his invention (a privacy-invading, data-collecting MacGuffin) to none other than Raymond, Villanelle's old handler from The Twelve. That's when she uses the safe word, drawing Eve to the manor.

After Eve blows Villanelle's cover, Aaron promises the assassin they can murder together — if she just kills Eve first. Unfortunately for the control freak, Villanelle chooses Eve over him, and slits his throat… although she lets the voyeur watch himself in a mirror as he dies.

With Aaron dead, Eve returns to her hotel room to find that it's been cleaned: no surveillance equipment, no dead or dying Hugo, nothing. The whole thing has been a set up orchestrated by Carolyn. That's why she sent Eve with orders for Villanelle not to kill anyone: because she knew Villanelle would rebel and do exactly that. And that's why MI6 had no record of Eve as an agent when Villanelle called them: Carolyn has been keeping everything off the books, so it looks like The Twelve is responsible for Aaron's murder, and MI6 gets him out of the way without getting its hands dirty.

Villanelle and Eve are confronted at Eve's hotel by an ax-toting Raymond. As he's busy strangling her, Villanelle begs Eve to pick up the ax and kill him — which she does, with several gory thwacks. The pair then flee into some abandoned ruins, where some pigeons startle Villanelle into drawing her hidden gun. Eve is incensed to find that Villanelle was armed and could have killed Raymond on her own — but chose instead to manipulate Eve into committing her first murder. Villanelle begs Eve to run away with her and tells her she loves her, but a furious Eve turns to leave… so Villanelle points the gun at her back and shoots.

Season 1 ended with Eve stabbing Villanelle; Season 2 ended with Villanelle shooting Eve. Their cycle of violence and obsession has come full circle. Where will it go in Season 3? Find out when the new season premieres on Sunday, April 12.