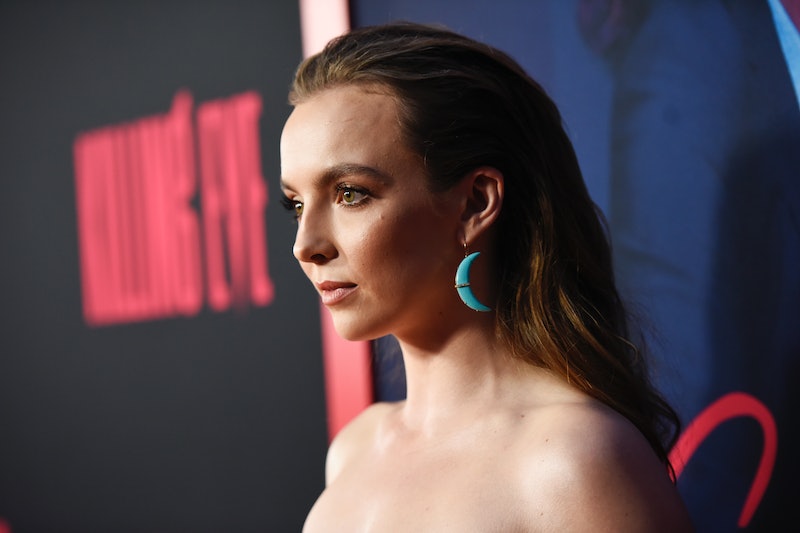 With an entire six days to go until one of the most desperately awaited shows of the year returns to UK screens, Killing Eve star Jodie Comer's latest (delightful) interview with the Guardian might help to soothe your impatience. The actor behind Villanelle, it turns out, is ever so slightly different from the remorseless assassin she plays: she's down-to-earth, very in touch with her feelings, and so close with her family that she let them take her BAFTA on a pub crawl. Cute!

After last month's BAFTAs, where Comer won best actress, she celebrated with her nearest and dearest: "Me, my dad, my brother and my mum were still up at 6 a.m. drinking champagne," she told the Guardian. The next day, Comer and her brother recuperated correctly: with an episode of Game of Thrones and a burger.

Her parents took the statue — newly christened "Billy" — back home to Liverpool, she said. "My dad had it out on the train, and this woman went: 'That’s not from Poundland, is it?' This other woman said: 'Is that the real thing?' He said, 'Yeah, do you want to touch it?'" And that wasn't the end of Billy's adventures. "They took it on a pub crawl. They were so proud," Comer said.

The Hollywood lifestyle, it seems, doesn't especially appeal to her, even as her fame mounts. "I want to work. I don’t want to be seen. I guess I just don’t feel the need to, really," she told the Guardian. "Also! If I’m going out, I want it to be with my closest mates in a flat, with my hair tied up, doing something really embarrassing. I want that to be in a private world."

It was at an afterparty following Comer's first BAFTAs in 2017 that she met Phoebe Waller-Bridge, creator of Killing Eve, she said. "I was like, oh my God, I was soooo drunk. Like, what did I do? Have I ruined it? And she rang me just before I went in for my recall, and went, 'Maaate!' And I was like, 'I know!' She said, 'We’re both in the same boat, so don’t worry.' I was obsessed with Fleabag. When I saw her name attached to this, I thought, I’ve got to do it," Comer said.

And thus, Villanelle was born, though Comer doesn't share a lot with the preternaturally detached antihero. "I’m a Pisces, so personally, I’m up here, or I’m the opposite," she told the newspaper. "There’s no in-between with me. But I love a good chat about feelings. I’m like, come on girl, let’s get it all out, let’s have a cup of tea." She still sympathises with those who sympathise with the mass-murdering Villanelle, however. "We can sometimes see ourselves in her everyday personality and the ways she has about her," she said. "Not in all the murder stuff."

The actor also discussed the ambiguous relationship between Villanelle and Sandra Oh's Eve, explaining, "I mean, I know from my perspective, Villanelle is sexually attracted to Eve. I can’t speak for Sandra and Eve, but I think it seems impossible, and it probably is." She added, "It’s so hard, because you know what the audience wants, and that’s what we’ve tried to explore more in this second series." On June 8, when Killing Eve airs on BBC One and the series returns to iPlayer, UK viewers will finally get to see how that plays out.