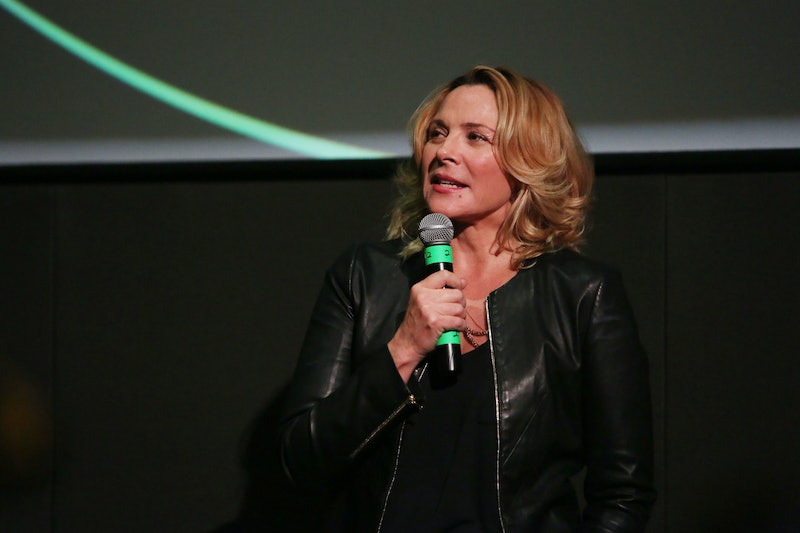 The incomparable character of Samantha Jones captured the hearts of a generation with her quick wit and unshakable confidence. Well, Sex and the City fans will be happy to hear the news that Kim Cattrall is set to star in Filthy Rich, a new show coming to Fox. And, looking at early descriptions of the show, it already seems like it's going to be a big hit.

According to Digital Spy, the new show is described as a Gothic dramedy set in the American South, and will focus on two women who are "fiercely devoted to their families." An official synopsis of Filthy Rich reads:

"When the wealthy CEO of the world’s largest Christian network dies in a plane crash, his wife and adult children are stunned to discover he has grown, illegitimate kids who are also in his will. When the steel azalea matriarch of the family tries to pay them to go away, these newly legitimised heirs have very different ideas and insist on not only staying in town, but becoming part of the family empire."

As well as starring as the show's lead, Cattrall will also act as an executive producer. And according to The Wrap, the show is directed by Tate Taylor, known previously for his work on Academy Award-winning film The Help. Taylor will also be writing for the upcoming show, as well as executive producing it alongside Cattrall, Brian Grazer, Francie Calfo, and John Norris.

Filthy Rich opens as the wealthy CEO of the world's largest Christian network dies in a plane crash. After his untimely death, his wife and kids are shocked to discover that their husband and father has illegitimate children — who are also included in the will. According to Deadline, the family matriarch attempts to pay the newfound heirs to go away, but they have very different plans, and insist on moving locally to become part of the family empire. Cattrall will portray the character of Margaret Monroe, who is a popular lifestyle TV star.

In addition to Filthy Rich, Cattrall also recently appeared in the first season of the CBS All Access anthology series Tell Me a Story. The Liverpool-born actress has also previously starred in the HBO Canada series Sensitive Skin, the second season of Modusfor, the BAFTA-nominated BBC series The Witness for the Prosecution, and Any Human Heart. However, as previously mentioned, the actress is best known for her iconic role on Sex and the City, a role which won Cattrall a Golden Globe award and an impressive five Emmy nominations.

Rumours of a potential third Sex and the City movie have been circulating ever since the release of the franchise's second movie back in 2010. However, according to the Daily Mail, fans of the show shouldn't hold their breath, as Sarah Jessica Parker — who played Carrie Bradshaw in the series — has confirmed that plans for a third movie had been scrapped.

Aside from her work on screen, Cattrall is also known for her appearances in theatre. "She has made repeated returns to the theatre since the end of [Sex and the City]," the Evening Standard reported back in 2013, when Cattrall was starring in the Tennessee Williams play Sweet Bird of Youth at London's Old Vic Theatre.

Now, however, Cattrall is well and truly back on our TV screens with Filthy Rich, and I, for one, couldn't be happier about it.