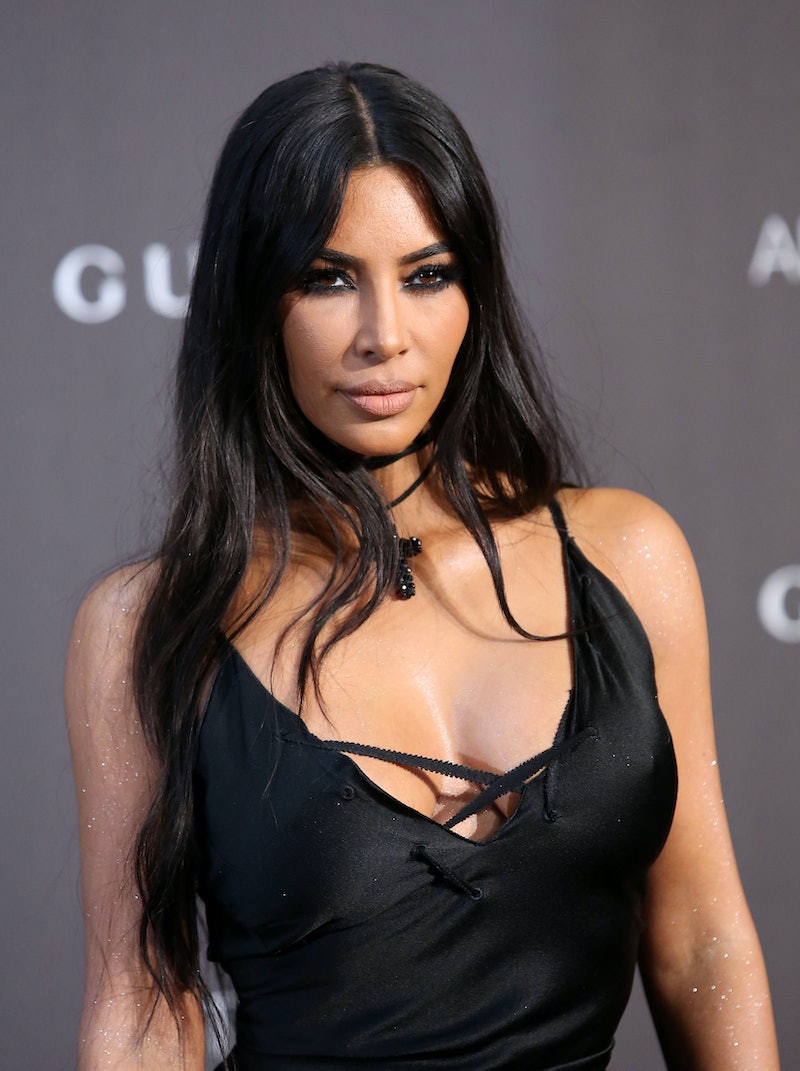 After the season finale of Keeping Up With the Kardashian aired on Sunday night, Kim Kardashian shared a few final thoughts on what played out in the episode. During an appearance on Busy Tonight that same night, Kardashian addressed the controversy over her White House visit, revealing to host Busy Philipps why she went through with meeting Donald Trump, despite knowing it might not go over well publicly.

In order to plead the case for Alice Johnson — a grandmother who was incarcerated for more than 20 years for a non-violent, first-time drug offense — Kardashian decided to meet with Trump, since in a federal case, only the president can grant a pardon. While on Busy Tonight, Kardashian admitted she had doubts about visiting the White House, but knew it was the only way to make a difference. She reached out to Ivanka Trump and Jared Kushner to set up the meeting. She explained,

"There was, you know, a moment at first that I felt like, OK well, everyone is going to be upset with this decision, but I didn't care... I am very grateful for the president for helping us out in that situation. I might not agree with the policies, but I stay focused on the subject, and for me, it wasn't about politics it was really about people and her."

In the end, the KUWTK star decided to go forward with the appointment, regardless of the debate it would inevitably stir.

Kardashian further defended the visit, arguing that criminal justice and prison reform can't wait for a change in office. "I will tell you right now, everyone behind bars does not care who the President of the United States is," she said. "They would rather me not wait four more years for another president to come, or eight more years for another president to come that they might like a little bit better to make this move."

Even still, Kardashian's meeting with Trump was met with considerable backlash online, as pointed out by Glamour. Critics felt the meeting normalized the president's policies and behavior, or that Trump was using Kardashian as a publicity opportunity. During the interview on Busy Tonight, Philipps asked how those kinds of comments made Kardashian feel.

"I just thought, you know what, everyone talks sh*t about me all day long anyway, I'm going to go and not worry what people say about me," Kardashian said. "I'm going to go and do the thing that I feel is the right thing to do, and I'm going to talk to the person who has the power to make this decision, the only person."

The reality star's appeal in the Oval Office was an unexpected success, given the president's prior rhetoric about being "tough on crime." As reported by CNN, Alice Johnson's sentence was commuted in June, and she was freed from prison. According to The Today Show, Kardashian first heard of Johnson from a video on Mic, and took an interest in her story. Johnson had been serving a life sentence since 1996, and was not aware of Kardashian before the reality star advocated for her release. Kardashian and Johnson met for the first time during an emotional sit-down interview on The Today Show.

Moving forward, Kardashian plans to continue to advocate for criminal justice reform. In November, Kardashian participated in a Criminal Justice Reform Summit with CNN commentator Van Jones. "I'm learning so much about prison reform and justice reform," Kardashian said on Busy Tonight. "So just learning more about that and continuing to help more people. When you get into it, you realize how f*cked everything is."

Kardashian made it clear that weathering any criticism was worth it to free Johnson. It's understandable that the meeting didn't sit well with all fans, but the reality star did bring more attention to Alice Johnson's case. And in the future, she seems committed elevating the issue and hopefully will be able to have an even bigger impact.