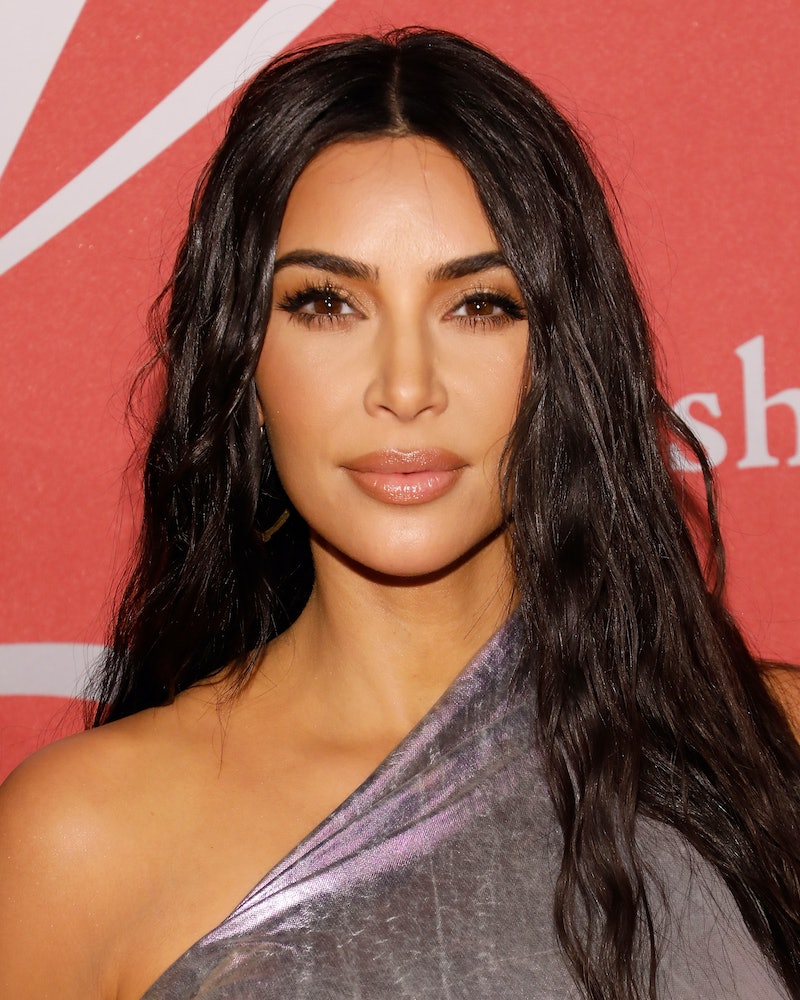 Never one to let a holiday pass without a major celebration, Kim Kardashian debuted two more family Halloween costumes over the weekend. On Saturday, Kardashian posted a spooky family photo on Instagram, and in the picture, the whole Kardashian-West crew are dressed up as bugs. The elaborate costumes were complete with bug goggles, creepy antenna, and realistic wings.

Kardashian's photo, captioned, "West Worms" with caterpillar emojis, appears to show the family at all stage of the bug life cycle. Kanye West wore an enormous, ant-like suit, while baby Psalm was dressed as a little larvae. Later on Saturday, Kardashian shared more photos of the family costume on Instagram, writing, "A bugs life!" The reality star revealed the costumes were even more intricate than met the eye, writing, "My costume glowed Kanye’s costume moved and was all animatronics."

Family and friends reacted to the dramatic costumes in the comments, with Kris Jenner writing, "This is so amazing," while Kylie Jenner added, "Omg." Khloé Kardashian shared her appreciation for the bug looks as well, writing, "wow wow wow I don't even know what to say," and she praised North West's modeling skills, writing, "North out posed EVERYBODY."

On Sunday, Kardashian shared yet another family costume on Instagram, and in this photo the whole crew dressed up as characters from Sing. In the caption, Kardashian named each character, writing that Saint was Johnny, Psalm was Johnny's brother, and Chicago was Ash. West, who dressed as Johnny's dad, wore a huge costume which apparently created some issues when came to trick-or-treating, with Kardashian reporting the costume, "could hardly fit in the car."

The costumes rounded out an already eventful Halloween season for the family. On Friday, Kardashian shared a picture of her crew dressed as The Flintstones on Instagram, complete with Kanye West sporting a Dino costume. In the caption, Kardashian thanked the photographer for editing Chicago into the adorable photo, writing, "The family pic was such a challenge because Chicago was so scared of Dino!"

In the past, Kardashian has been candid about how difficult posing with the whole family can be. In August, the makeup mogul shared her first photo with all four kids on Instagram, which was taken on a vacation in the Bahamas on Instagram. She wrote, "I thought taking a pic with three kids was hard OMG this is almost impossible!" Taking a photo with everyone may be a struggle, but for the Kardashian-West family, doing so is likely worth it to show off the elaborate costumes the family put together for Halloween.

More like this
Did Pete Davidson Remove His Kim Kardashian Tattoos? Photos Point To Yes
By Alyssa Lapid
North West Will Make Her Acting Debut Alongside Mom Kim Kardashian
By Radhika Menon
Everything You Need To Know About Kanye's Post-Kardashian Dating Life
By Bustle Editors
Kim Kardashian Gives “Bucket List Dream” Lecture At Harvard
By Alyssa Lapid
Get Even More From Bustle — Sign Up For The Newsletter
From hair trends to relationship advice, our daily newsletter has everything you need to sound like a person who’s on TikTok, even if you aren’t.