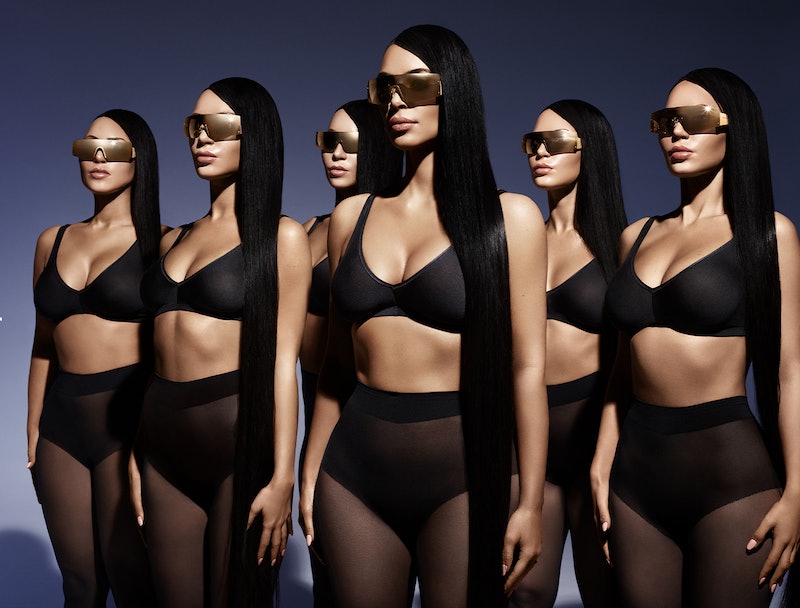 Kim Kardashian West recalls the first pair of sunglasses she was completely obsessed with when she was a teenager. They were rimless and from Christian Dior, and she and sister Khloe Kardashian wanted them so badly, they basically stole them. Basically.

"We were in Hawaii and there was this Christian Dior store and no one [was working] there. Like, it was [in] the wild... just an empty store. Khloe really wanted the Dior sunglasses, so she took them and we walked out," Kardashian West tells me, giggling as she remembers the details. "These sunglasses were everything. I still have them to this day and they were so much fun. So cute. That was so funny. We were like 'this is wild.' I think the [employee] must have gone to the bathroom or been in the back by herself on a Sunday. I don't know what the story was, but it was really funny."

Gone are the days where Kardashian West has to shoplift her dream pair of sunnies (like, long gone). These days, she's designing them herself. On April 2, Kardashian West and German brand Carolina Lemke launched a collection of fierce, fashion-forward sunglasses that the makeup-turned-fashion mogul conceptualized from beginning to end. The first drop is available now, with more to come soon.

Although Kardashian West admits she already has "so many glasses," she often finds herself itching for a new, specific style that might not actually be sold in stores. This collaboration let her turn those sunnies fantasies into a reality. "It's nice to have a company that will really listen to your direction, really wants to collaborate, and have me actually design everything from start to finish," Kardashian West says of the process, which she also calls "really fun."

To celebrate the launch, she invited a group of fashion influencers, press, and arguably her biggest supporters and fans, mother Kris Jenner and daughter North West, to the swanky Hotel Bel Air in Los Angeles. Kardashian West and I are chatting in the sunlit garden foyer, which opens to a room where all her sunglasses are on display. There are seven different styles in a variety of colors, ranging from '90s-inspired narrow frames to oversized reflective shield silhouettes. Three mannequin heads are situated in the front of the room like an art installation, each of them donning sideswept, floor-length extensions and a pair of specs. They look a lot like the Kim K models that were in the collection's ad campaign, as well as the somewhat eerie press box she sent out this week that was filled with masks of her face. I ask her if it felt creepy to see her likeness in all of it.

"It was," she confirms, saying she was about to post a photo of about 100 masks laying out together. "To see that was such a trip," she says. Perhaps unsurprisingly, this Hundreds Of Replicas Of Kim's Face idea came from her husband, Kanye West.

"We wanted to do the whole clones theme. [West] loves helping out with the ad campaigns and stuff, overseeing like the clones and the longer hair. He was so stuck on having long hair only on one side ... and I was like, all right, I haven't seen that before," she explains.

To create the replicas, Kardashian West says they had to digitally scan her entire body and face (which isn't the first time she's had to have her physique reproduced — remember her fragrance bottle that was shaped like her body?).

"At first we made the mannequins and then we kind of wanted moving images ... so then we also made face masks. As soon as I saw them I said, this is our press box. Like, it just clicked. I was like, this is what it has to be. I've never seen anything like it. I thought it was cute," she smiles as she recalls the moment.

Kris Jenner couldn't agree more with her daughter's decision to make all those masks, though "cute" wasn't the first word that came to her mind. Before sitting down with Kardashian West, I ask Jenner about her recent Instagram post celebrating the launch. In the photo, Jenner, makeup artist Etienne Ortega, and hair stylist Jorge Serrano all posed wearing the Kim K masks and the sunglasses. Jenner says that it "scared the sh*t out of [her]" when she opened the press box to see her daughter's faces staring back at her, but that she also thought it was really, really cool.

At the lunch, Jenner was wearing her daughter's favorite pair of sunglasses called Dusk, paired with a pinstriped suit and Chanel sneakers. "[Dusk is] like my everyday [style]. I can wear that anytime," Kardashian West tells me. It just so happens to be the design that she picked for her mom, too. Of course, she also designed the other styles with sisters Kourtney Kardashian, Khloe Kardashian, Kendall Jenner, and Kylie Jenner in mind. Kardashian West quickly fires off which frame was made for which sister.

"I made the round ones [Indra] with Kourtney in mind, Kendall with the tiny [Dusk] in mind. Khloe, the big visor [Nirvana]. Khloe loves an aviator but we don't have any aviators in the collection, so I would pick a visor [style]. Kylie, I would pick like the sporty [Sahara]. And then for me, I would pick [mirrored Tempest]," she says. The Tempest, Kardashian West reports, is also North's favorite, specifically the silver version.

As she finishes answering my questions, Kardashian West spots her budding fashionista daughter bouncing around the garden. North West has just arrived at the event, dressed in a hot pink two-piece set. I tell her that I think North's style is amazing and that I can't get enough of her outfits, picturing the all black ensemble she recently rocked at her dad's Sunday service as I pay the compliment. "It's so much fun," Kardashian West replies, the huge, proud smile returning on her face.

Kardashian West then gets up from her seat to greet North, walking towards the room of sunglasses and floating mannequin heads, her sideswept hair blending perfectly into theirs.