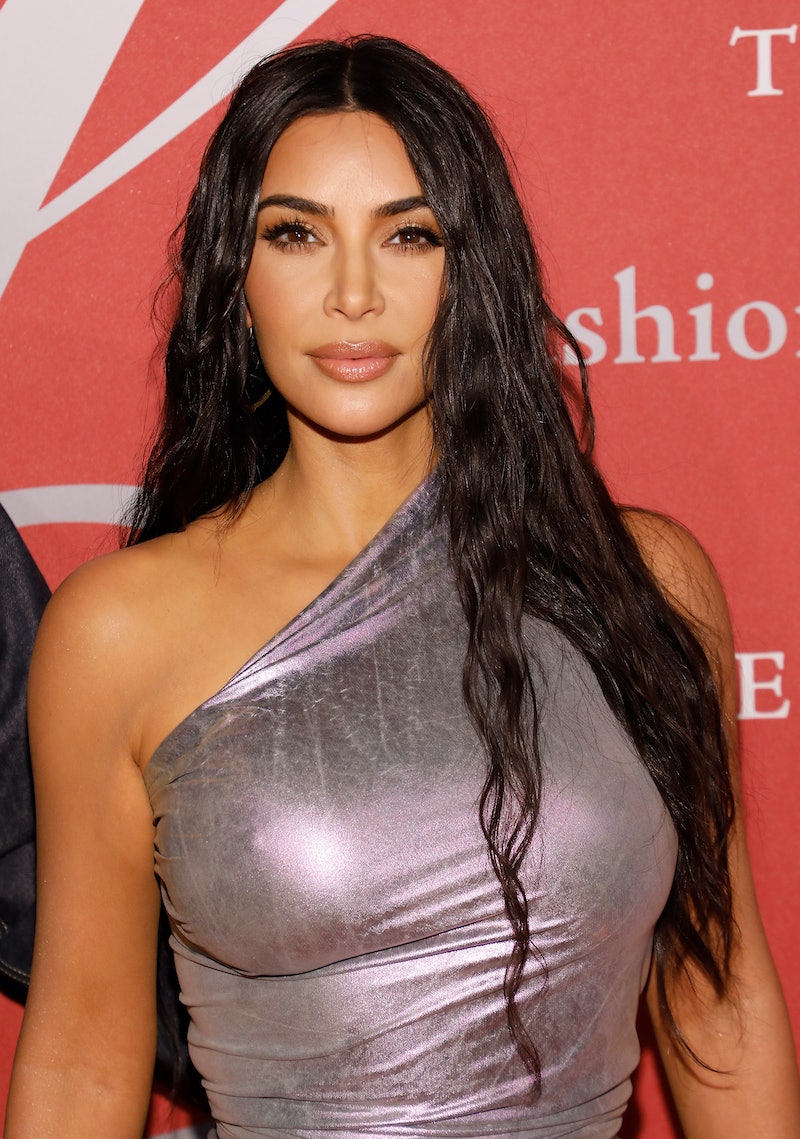 If you're a fan of Kim Kardashian, you would know that the reality star loves to go all-out for Halloween, whether it's a Cher costume with BFF Jonathan Cheban or a grand angel display with her sisters. But, this year, Kim Kardashian's Legally Blonde Halloween costume might just take the cake (or the candy). Given Kardashian's current status as a law student, just like Elle Woods, her outfit is all the more perfect for the holiday.

Kardashian showed off her multiple Elle Woods looks on social media. In one snap, she posed in a pink dress, of course, along with Elle's classic, fluffy pen and her trusty dog, who rested in her bag. She didn't just post photos of her costumes though, she went the extra mile with her theme by recreating Elle's Harvard admissions video scene by scene. The Keeping Up With the Kardashians star put her acting skills on display as she recounted what happened on Days of Our Lives and spoke out against generic toilet paper.

Now, if you've seen Legally Blonde, you would know that Kardashian and Elle Woods actually have quite a lot in common, making the reality star's Halloween costume even more fun. Like the fictional character, the KKW Beauty mogul is also studying law and is doing so despite receiving judgement from those around her. Of course, just as Elle did in the film, Kardashian is managing to put in the work in order to become a lawyer and is proving the haters wrong in the process.

Kardashian first announced that she was studying law back in April via Vogue. She told the publication that she was enrolled in a four-year apprenticeship program at a law firm in San Francisco, California. Her goal is to take the bar exam in 2022. In California, you are allowed to take the bar exam via this route, which is referred to as "reading the law" without having a college degree. On Instagram, Kardashian explained that she is able to go through this process as she did receive 75 credits during her time in college (she attended Pierce College in Los Angeles, but did not complete her studies, per The Hollywood Reporter).

The reality star has been hard at work regarding criminal justice reform. In 2018, she was a major voice behind Alice Johnson's release. Johnson was originally sentenced to life in prison for a first-time nonviolent drug charge. After learning about her case from a Mic video, Kardashian got in touch with the White House via back-channel discussions with President Donald Trump's son-in-law Jared Kushner. As Axios noted, after meeting with Trump herself in late May, the president granted Johnson a commutation and she was subsequently freed from prison.

Considering that she's already put in work that would make Elle Woods proud, it's really no surprise that Kardashian would pull out all of the stops to become her very own version of Elle Woods for Halloween.