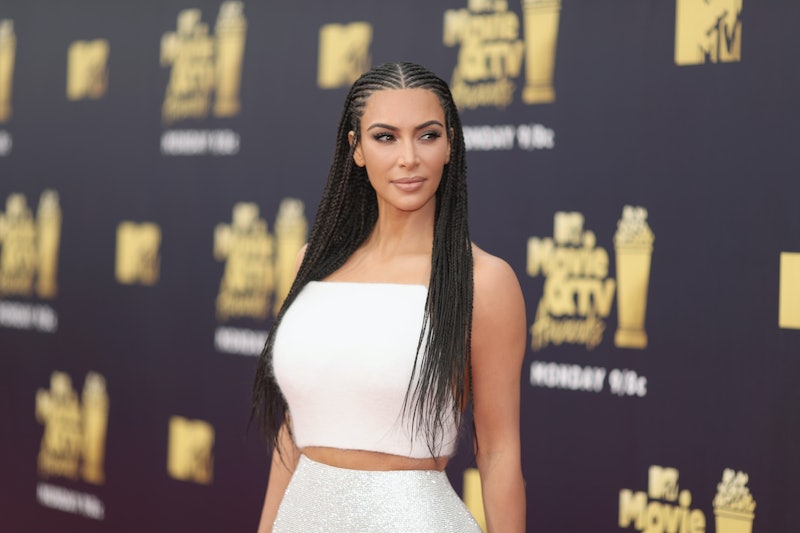 When it comes to red carpets for MTV award shows, you never know what you're going to get. Whether it's the most outrageous ensemble or a casual pair of jeans, they're exciting because they're unexpected. At the 2018 MTV Movie & TV Awards, Kim Kardashian appeared in an ensemble that harkened back to her crop top and skirt look from the CFDA awards this year where she won Influencer of the Year. Kardashian also wore another throwback to a hairstyle she's worn in the past.

Why is Kardashian in attendance at the show, though? Keeping Up With the Kardashians is nominated for the Best Reality Series/Franchise. She and her family have some stiff competition, though. They're nominated alongside hit series like RuPaul's Drag Race, Real Housewives, and Vanderpump Rules. At the end of the day, it'll come down to who's fan base headed to the MTV polls and secured their favorite reality show that golden popcorn.

To celebrate the nomination, Kardashian walked the red carpet at the award show in a gorgeous two-piece ensemble that was actually totally '90s. The column skirt featured some serious glitter power and was fully covered in sparkles. Of course, what's a sequin skirt without a slit? Kardashian's went from the bottom of her skirt to her mid-thigh. As for her top, it was a classic, strapless crop, but it pure '90s fashion was actually fuzzy.

The outfit was a total smash.

As for Kardashian's date? It wasn't her husband, Kanye West. It was her mom and manager Kris Jenner, and honestly, seeing her may be just as exciting as seeing Kardashian.

The one aspect of Kardashian's ensemble that's kind of a throwback? Her hair, which was styled in braids.

At the awards show, Kardashian chose to pair her ultra chic, two-piece ensemble with long, plaited braids reminiscent of her "Bo Derek braids" that she wore on Instagram a few months. The only difference is that the most recent braids do not include beads like her past looks. In the past, when Kardashian dubbed the hairstyle "Bo Derek braids," many social media users were quick to call Kardashian out for appropriating the hairstyle.

An area of contention around Kardashian wearing the style was her choice to name them "Bo Derek braids" when they were not originated by actress Bo Derek in the film 10. The style is actually known as fulani braids, a style created by black women. It's also a style that Derek has also been criticized for appropriating in the past.

Kardashian's Instagram photoshoot this year and hairstyle at the 2018 MTV Movie & TV Awards isn't the only time Kardashian has named the braids as Bo Derek's, either. All the way back in 2013, Kardashian wore the hairstyle in a photo with her husband on her Instagram account.

Kardashian's "Bo Derek braids" aren't the only time that she's been criticized for cultural appropriation. In 2016, Kardashian commonly called what she deemed "boxer braids." The style was another example of Kardashian being accused of appropriating the styles of the African community. According to Teen Vogue, model Leomie Anderson was one of the voices criticizing Kardashian's decision to wear the style and not acknowledge its roots.

While Kardashian's 2018 MTV Movie & Video Awards ensemble is a chic, two piece that will probably cause no controversy, the same does not appear to be true of her choice of hairstyle. After posting a video of herself to Twitter, social media users began to point out that Kardashian's braids are appropriative.

Some called Kardashian out for privilege.

Others drew the same parallel to her former choice to dub the braids as inspired by Bo Derek.

As for whether Kardashian will acknowledge the criticism of appropriation is yet to be seen. However, when Kardashian donned her "Bo Derek" braids on Instagram, she gave no official statement regarding the critiques.

Following her appearance at the 2018 MTV Movie & TV Awards, Kardashian did retweet an image of herself in the same style from 2013. Is that her response? Fans and critics will have to suss that out for themselves.