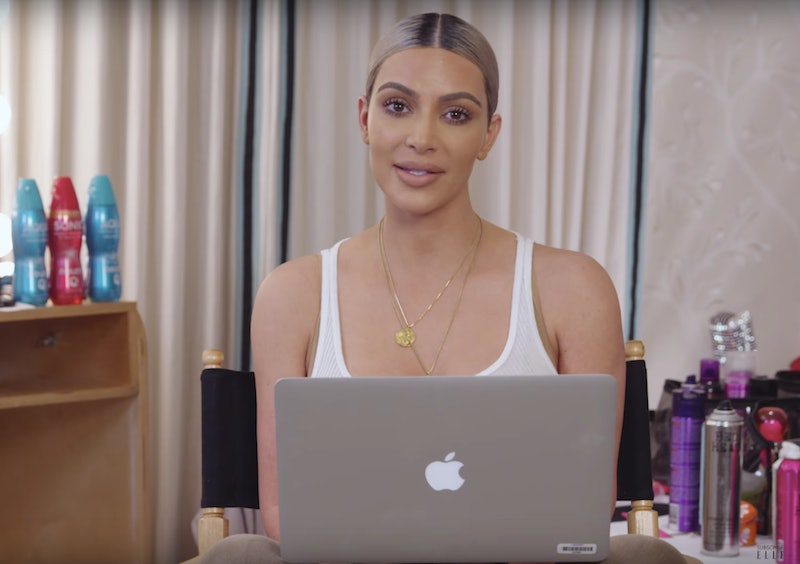 Kim Kardashian knows that the media loves to report on her family — and now, she's setting the record straight about some seriously outrageous rumors. In a new video for Elle, Kim Kardashian fact-checks headlines about her famous family. And while the results are hilarious, the video is also a good reminder not to take everything you hear at face value.

The first headline Kardashian reads is one from the Daily Mail. The headline cites the reality star as saying "My son is a genius" about Saint, because he apparently knows how to spell the word "gargantuan." That one was apparently a truthful headline, too — it gets a pass from Kardashian, who allows it to stay as-is. "That was his first word that he ever spelled," Kardashian says of her son in the video. "Pretty crazy for a 2-year-old."

The next headline in question isn't as accurate, though, according to Kardashian. Another Daily Mail story, the next article in question called Kris Jenner "chubby-faced," while referencing recently surfaced photos of the Kardashian-Jenner matriarch at age 22. "I actually tweeted about this, because this headline really bothered me," Kardashian says in the Elle video. As for the updated headline she'd like to give the story? "OMG! Stunningly beautiful, youthful Kris Jenner models in never-before-seen shots."

As the video continues, Kardashian goes on to agree with a HollywoodLife headline that says having a third child "won't stop her from posting racy photos." And she confirmed another seemingly outrageous headline, too. Apparently, Kardashian really does have a section in her will dedicated to her hair. "If I am so out of it that I can't even communicate, and I'm, like, sh*tting on myself, I definitely need my hair, my nails, and my makeup done," Kardashian says in the video. "I want to look as good as possible."

This video proves that even Kardashian hasn't heard some of the more out-there rumors about her family, too. One headline reads, "Kourtney Kardashian frees the nipple on date with Justin Bieber," to which Kim K responds that she's "never heard of" this report. She doesn't explicitly deny the headline, however, saying simply, "I don't speak about other sisters and what they're doing." That seems to be a policy she's adopted pretty consistently too, given the fact that she repeatedly avoided all of the rumors about Kylie Jenner's pregnancy (even going as far as drinking a sardine smoothie).

And while she may not be commenting on the rumors about her sisters, Kardashian did shut down another misleading headline about her mom. A 2015 story from Us Weekly claimed that Jenner wanted to trademark the word "momager." But in the Elle video, Kardashian explains that Jenner apparently trademarked the word "a decade ago."

This isn't the first time Kardashian has corrected headlines about her family either. In January, she shared a tweet from the Daily Mail that claimed she'd already asked her surrogate to carry another child for her. Kardashian called the story "fake news." (In response, the publication later updated their story, adding, "However, Kim said later that day on Twitter the claims were untrue.")

And in September, Kardashian criticized a Harper's Bazaar tweet about a reported conversation she had with Kylie Jenner about her pregnancy. Kardashian called it "a very fake story." The story mentioned in the tweet was originally published by Cosmopolitan, and it was later updated to reflect Kardashian's tweet.

The next day, Kardashian urged her followers to be wary of sources who speak to the media about the Kardashian/Jenner family. Even if someone is close to the family, that doesn't mean they know everything about their personal lives. Her words are a good reminder that fans shouldn't believe everything that comes from unnamed sources.

The Elle video is funny, but it's also a good lesson in not believing everything you hear (or read online). The Kardashians and Jenners are the best source of information about their family. And if a report seems too outlandish to be true, it might not be — so you're better off keeping an eye out for a tweet from Kim K setting the record straight.