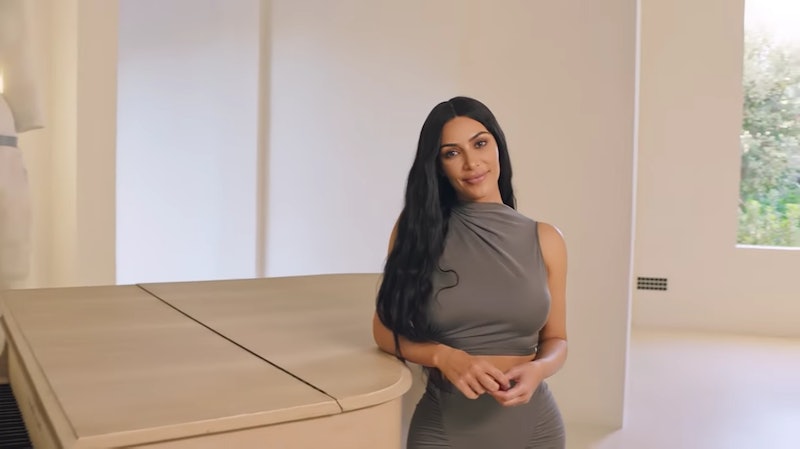 News that Kim Kardashian is studying to be a lawyer hit the internet on April 10, thanks to her profile in Vogue magazine. But it turns out that isn't the only thing she revealed to the publication. Kim Kardashian's Vogue 73 Questions interview revealed her favorite beauty product and the beauty trend that she regrets — and the answers may surprise you.

If you haven't heard by now, Kim Kardashian is a Vogue cover woman. The reality star, KKW Beauty mogul, and mother of three (soon to be four) landed her first solo appearance on the famous American fashion magazine. Previously, she appeared on the cover with her husband Kanye West, but it's all about Kardashian now. Her social media announcements portray just how excited she was to finally have gotten that coveted spot all to herself.

In her Instagram post, Kardashian wrote, "I’ve dreamed of this moment for so long, many said it would never come. Words cannot begin to express how much of an honor it is to have my first solo US cover of @VougeMagazine. I remember as a little girl flipping through my mom’s subscription each month and dreaming of one day gracing the cover of this iconic magazine."

Kardashian didn't just grace the cover, though. She also took part in the magazine's well-known video series 73 Questions and revealed some beauty secrets you may not have known.

In the series of questions, Kardashian is asked about the one beauty product she can't live without, and while it's not incredibly surprising that she names a product from her own brand, the one she chooses may just give away the creation she loves most. According to Kardashian, her KKW Contour is her must-have product. Given that the beauty entrepreneur is known for her chiseled cheekbones, the answer makes perfect sense.

Another beauty question for Kardashian was all about what beauty trend she regrets the most, and this one may come as a shock. According to Kardashian, she regrets her stark under eye highlight, which was her signature for some time.

In the 2000s and early 2010s, Kardashian was a major fan of under eye baking and brightening. That's partially thanks to she and makeup artist Mario Dedivanovic's fame for introducing contouring and highlighting into mainstream beauty. According to Kardashian, though, that bright under eye look is one she regrets.

Kardashian's regrets and her favorite product weren't the only beauty-based thing she revealed. While the star may have been known for her full face of glam in the past, the thing she's loving now is fresh and dewy makeup. Could that mean something new coming from KKW Beauty? Kardashian didn't drop any hints, but her brand is all about her signature beauty styles.

While Kardashian's 73 Questions with Vogue didn't center completely around her famous beauty routine, fans did learn just a bit more about have the star's opinions have evolved other time. Plus, could she have given a hint about more dewy products coming from KKW Beauty? Maybe, but only time will tell. Until then, fans can bask in the glory that is her Vogue cover.