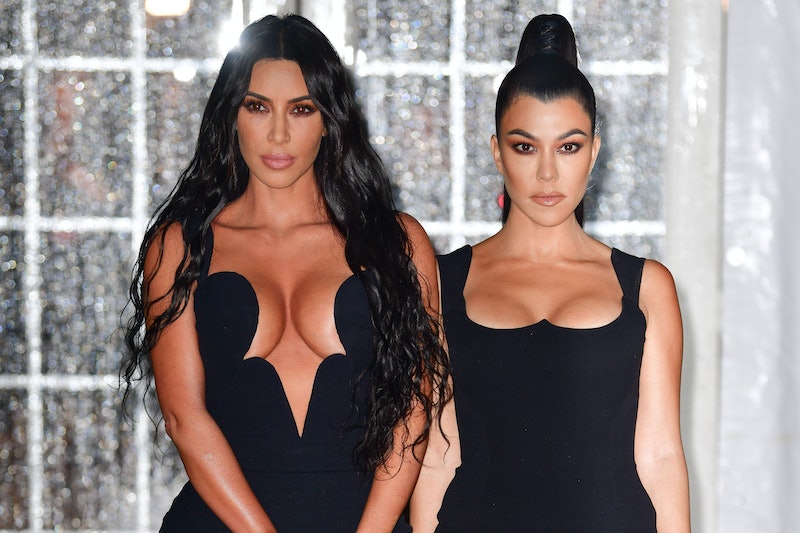 When the Kardashian-Jenner family signed up to make Keeping Up With the Kardashians in 2007, they agreed to air out all of their dirty laundry — for better or for worse. However, just a few weeks after two of the sisters' biggest blowout aired on the show, Kim and Kourtney Kardashian are "embarrassed" by that KUWTK fight, especially now that they have reconciled and put their differences aside.

On the Season 18 premiere of KUWTK, Kim and Kourtney got into a physical fight after the KKW Beauty founder questioned her older sister's work ethic that resulted in the pair slapping and scratching each other violently. According to Entertainment Tonight, once Kim and Kourtney watched that fight back, they both felt bad about the argument and the way they handled their disagreement in the moment. "The sisters are embarrassed of the fight, but since the day they signed up to do the show, they promised to show their real life," a source told the outlet.

Kim echoed that sentiment during a March 30 interview with Jimmy Fallon, telling the talk show host that, "It's not my proudest moment but we were going through it." While recounting the fight for The Tonight Show, Kim also revealed that KUWTK didn't actually show how violent things really got between the two of them. "[Kourtney] scratched me so hard, I was bleeding," she explained. "You didn't really get to see that detail, but when I looked down at my arm, I saw that she had really scratched me and I felt it all on my back, I just went over and slapped her back."

The animosity between Kim and Kourtney was apparently so intense that producers shut down production on KUWTK for a week afterwards, so that everyone could recover. Still, even people who weren't present for the blowout were shocked by seeing the sisters go at each other — in fact, Kris Jenner cried when she saw a clip of the fight. "She was like, 'Who are you guys? What is going on?' I think everyone was really shook for a minute and just was like, 'This isn't our type of show."

Despite the tension between the pair onscreen, Kim told Fallon that she and Kourtney were in a much better place now, which a source close to the family confirmed to ET on April 4. "The sisters are fine and back on good terms. They were able to discuss their differences and although they don’t agree on how each handles things, they respect one another."

Of course, while Kourtney and her sisters are in a better place, the Poosh founder's relationship with the reality show is still very much up in the air. During the episode of KUWTK that aired on April 3, Kourtney revealed that filming the show gives her "anxiety" and that she's struggling with constantly having cameras around, documenting every second of her life. "I was anxious about filming this season because it doesn't make me happy," she told Malika and Khadijah Haqq on the show. "I don't want to miss out on time with my kids and it's not worth it."

While both Kim and Kourtney have admitted that they're not proud of fighting with one another in front of the KUWTK cameras, it seems like the sisters have finally reached a happier, more stable part of their relationship. Still, they just might have to relive some darker days for a little while longer, as Season 18 finishes airing.