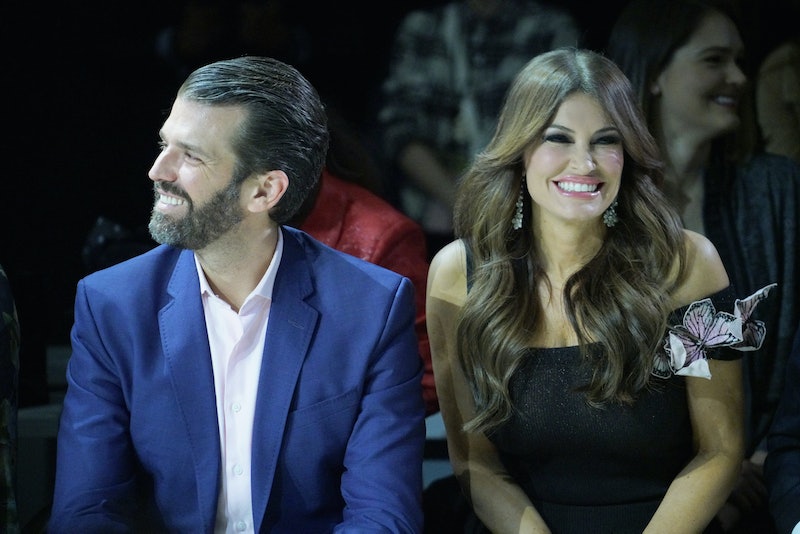 Guilfoyle — who has been dating Donald Trump Jr. since May 2018, according to reports — had been with Fox News from 2006 up until her departure last July. That's when she began campaigning with Trump Jr. in advance of the midterm elections, CNN reported. Almost immediately, she also took the job at America First Action Super PAC as vice chairwoman, The Hill reported at the time.

Now, she'll be working for President Donald Trump's reelection campaign. "America's continued success depends on @realDonaldTrump getting re-elected and continuing his #MAGA policies," Guilfoyle tweeted and wrote on Instagram Monday. "That's why I am absolutely THRILLED to announce that I'll be joining the Trump campaign as a Senior Adviser! It's time to get to work and WIN for America in 2020!"

Guilfoyle's hire was announced in a statement obtained by The Hill that said the Trump campaign is "assembling a world class team of talented individuals to help re-elect Trump."

"President Trump has a clear record of accomplishments and promises kept as he continues to Make America Great Again," Trump Campaign Manager Brad Parscale said in the statement. "These exceptional additions to the re-election effort will help us take our case to the voters and ensure victory."

Guilfoyle, when she started at America First, said in a statement given to The Hill that she'd never "experienced anything quite like the energy the America First movement brings." She also said she looked forward "to connect with the millions of grassroots supporters who believe in this administration."

She has not spoken much about her time at America First since. Guilfoyle did, though, talk about her time on the campaign trail, which coincided with some of her time working there, with the Breitbart News Daily podcast. She said that Trump Jr. is "the number one up-and-coming political figure on the right."

"[Trump Jr.] did so many campaign stops for his father," she told the podcast. "He actually spoke to people, and he listened for a change. … He’s at their level and is listening to them, and he’s connecting, and you can see it’s becoming quite a movement across the country."

Earlier this week, Guilfoyle was in the news for having put a house on contract in the Hamptons with Trump Jr. According to The New York Post, the $4.5 million property won them over because of its kettle pond and the ability to add on a room for Trump Jr.'s guns.

The commute to Trump Tower, where the campaign has its headquarters, will be roughly just over two hours by car in normal traffic — and more than three on the train — according to Google Maps.

No word on what Guilfoyle thinks about the work-life balance.