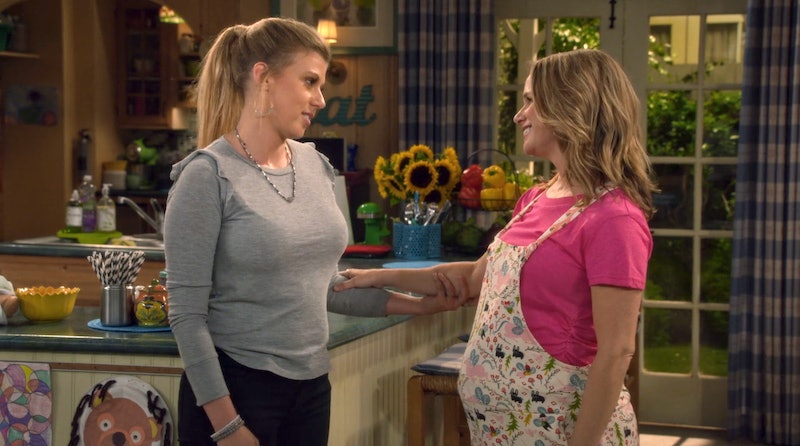 In "No Escape," Stephanie, Jimmy, Kimmy, and Fernando host a Lamaze class in the house for them and other local soon-to-be parents. But when the instructor only gives Kimmy and Steph one infant doll to practice swaddling and post-delivery mother-baby bonding, Kimmy seemingly becomes possessive. Steph grabs the doll to place on her chest since, as she says, "It's my baby." But Kimmy notes, "Hey, I just birthed that thing." In a moment that seems to be a nod to the judgment of Solomon story from the Bible (because why not, right), Kimmy and Steph's fight over the baby leads to the doll being split in two. Kimmy then runs off with the doll's torso into the kitchen while Steph chases after her. (Guys, there are strangers in the house — get it together.)

Since Kimmy is the gestational surrogate for Stephanie and Jimmy, it's understandable she'd have conflicting feelings about not being able to keep the baby. Especially since she's emotionally invested since she'll be the child's aunt. But, it turns out, Kimmy isn't upset about not raising the baby — she's just worried about what will become of her relationship with Stephanie after she gives birth.

Considering Stephanie has a history of not being Kimmy's biggest fan, Kimmy is worried that once she has the baby, they won't be friends anymore. "Once it gets here, everything's gonna go back to the way it used to be," Kimmy tells Steph. "Let's face it, you and I aren't gonna be close anymore." Even though Steph hasn't always been the kindest to Kimmy, she's worrying unnecessarily since these two are truly friends now. They even run a business together. Plus, raising children is always a household affair in the Full House/Fuller House world. So there's no way Kimmy will be cut out of Steph and Jimmy's baby's life.

Besides their friendship, Kimmy is also concerned about what her role will be in the baby's life. "I don't want my job to be over once the baby is born," she says. As surrogate.com outlines, it's normal for surrogate mothers to have difficult feelings while they're carrying the baby. But a study in the scientific journal Human Reproduction found that surrogacy is usually a positive experience for surrogates. And as long as Kimmy and Stephanie continue to live in the Tanner house together, there's no way that she won't be majorly involved in the baby's upbringing. And she'll always have that aunt connection through Jimmy too.

So while Kimmy's feelings toward being a surrogate got a bit complicated, it's good that she was able to share them with Stephanie now in the second trimester. Because that means that when Kimmy does give birth, the transition will be much smoother and full of love and happiness for everyone involved (it is Fuller House after all). And even though young Stephanie probably wouldn't believe it, adult Kimmy and Stephanie are now bonded for life.