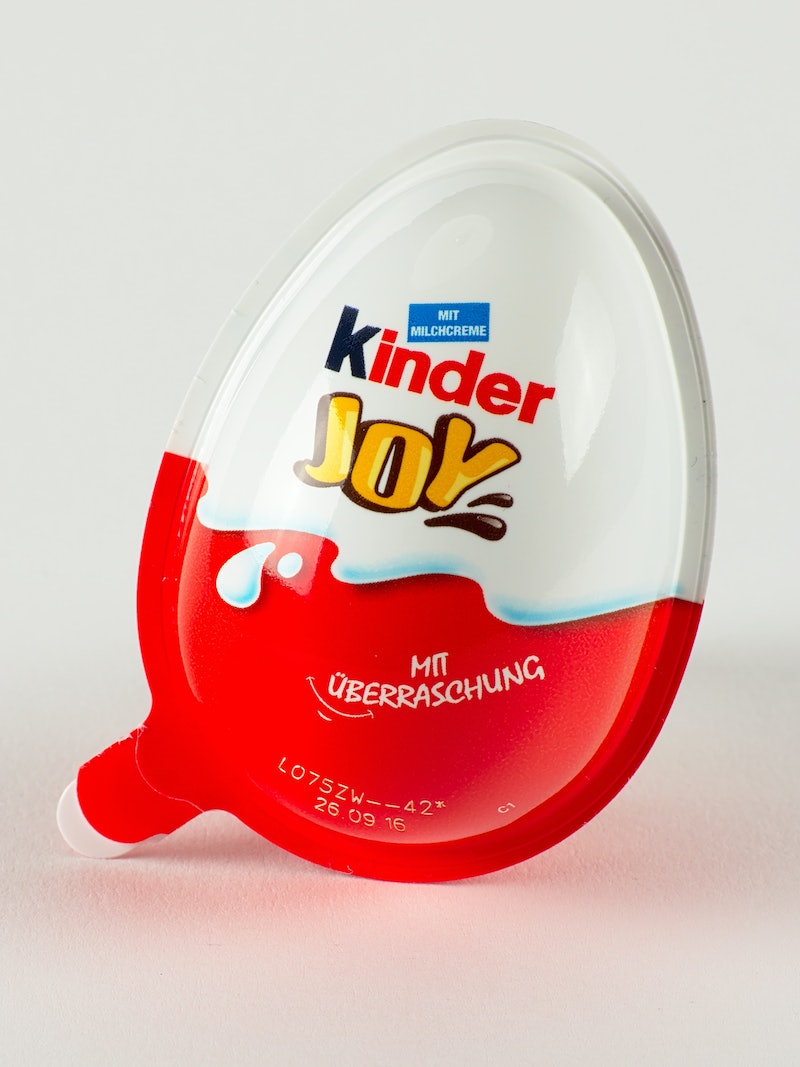 All rejoice hallelujah, the candy gods have blessed our bellies once again: Kinder Eggs are coming to the United States. Starting in January 2018, you can eat all the chocolate eggs your body can handle, according to a spokesperson for Kinder manufacturer Ferrero.

You may recall Kinder Eggs from such classic hits as being banned from the U.S. per FDA and the Consumer Product Safety Commission’s regulations. These forbidden Kinder Surprise Eggs had a milk chocolate shell and came with a capsule inside that contained surprise, like a tiny toy car or mini figurines. But the FDA was like, “SURPRISE! It’s a choking hazard.” So, Kinder Eggs were banned in the U.S. But starting at the beginning of next year, Kinder Eggs will be banned no more. ...Well, kinda.

Kinder Joy Eggs are the version coming to the U.S. (Kinder Surprise Eggs are still banned.) While Kinder Joy Eggs don’t come encapsulated with a milk chocolate shell, each egg-shaped package does contain chocolate and a surprise toy. Kinder Joy Eggs come with two individually packaged halves, one with a toy and the other with chocolate cream, two crispy wafer balls, and a tiny scoop. So, if you’re into itty bitty utensils, it’s almost like you’re getting two surprise toys. Almost.

We can’t talk about banned chocolate containing a surprise inside without mentioning the Nestlé Wonder Ball. (RIP Wonder Ball). The Wonder Ball came into our lives like, “What if a Kinder Egg was spherical?” And the children of the ‘90s said, “OKAY YES I WILL TAKE ALL OF THEM.” And the FDA was like, “lol ur def a choking hazard” and banished Wonder Balls to wherever chocolate goes when its shelf life ends.

Wonder Balls and the Kinder Surprise Eggs join the ranks of other banned childhood delights such as slap bracelets, which were banned in some schools after a girl cut her finger on the metal inside a knock-off slap bracelet. Fidget Spinners, while gaining popularity among kids and adults, might also join fellow fallen toy aisle comrades as some schools are starting to ban fidget spinners.

But dry your tears, sweet child of the '90s. While other treats and toys may come and go, it looks like Kinder Joy Eggs are here to stay. Provided no one tries to eat the toy inside and ruins it for the rest of us.