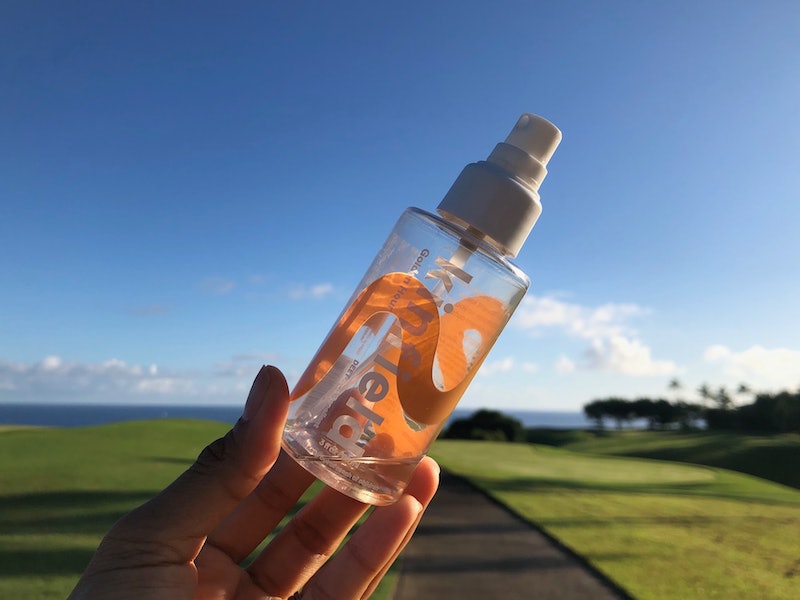 What's better than spending a gorgeous, sunny day outdoors in a tropical destination? Nothing. What's worse than a flock of mosquitoes feasting on your ankles and elbows? Nothing. Herein lies my perpetual dilemma. I love to spend as much of my summer indulging in nature's finest offerings, whether it's hiking up mountains or swimming in oceans. But over the years, I've regrettably become irresistible to those pesky mosquitoes and coincidentally, developed an allergy to their bites. There's also the fear of contracting West Nile virus. For these reasons, I drench myself in bug repellent and until recently, believed that the more DEET (also known as diethyltoluamide, the most common active ingredient in insect repellents) a bug spray had, the better it worked. Then I was introduced to Kinfield, a clean outdoor brand that developed a bug repellent made with plant-based ingredients. Naturally (no pun intended) I didn't think it would work. But during a recent trip to Hawaii, I put it to the test and was more than pleasantly surprised.

Before I get into how it worked on my vacation, let's first dive into why Kinfield decided to create a repellent with natural, clean ingredients instead of using tried-and-tested chemicals like DEET in the first place. A 2002 New England Journal of Medicine study found that DEET is "among the most effective ways to prevent bites." However, the question of whether or not the chemical is harmful to your health is a controversial one. According to Grist, studies have not definitively concluded that DEET is harmful to your health when used sporadically. However, the CDC (Centers for Disease Control and Prevention) states that there have been users who've experienced rashes, blisters, or irritation in their eye when using DEET repellent. In rare cases, DEET can sometimes be associated with lethargy, confusion, or disorientation, and in studies on rats, Duke University pharmacologist Mohamed Abou-Donia, found that "frequent and prolonged DEET exposure led to diffuse brain cell death."As a result, people often worry that too much exposure to DEET might be hazardous, especially to children, elderly people, or pregnant women. In fact, Canada has banned DEET in concentrations higher than 30 percent.

There's also the concern about DEET's effect on the environment. While DEET is not proven to be toxic to mammals, the EPA (Environmental Protection Agency) shows DEET as slightly toxic to birds, fish, and aquatic invertebrates. All of this inspired Kinfield founder Nichole Powell, a Minnesota native who was obsessed with traveling around the world and camping outdoors, to create a clean, all natural repellent that would later be called Golden Hour.

Golden Hour is a "first-of-its-kind" mosquito repellent that is formulated with clean and safe ingredients — free of DEET — and has lab-proven efficacy. It's all thanks to one specific strain of citronella that Powell discovered when she was in Bali, Indonesia. According to the Kinfield website, this specific strain contains higher quantities of the chemical compounds that repel mosquitoes, arguably making it more effective than any other citronella bug sprays you may have tried previously. It is also made with clove, lemongrass, and vanilla to add a sweetness that you might enjoy, but bugs will hate.

When I first sprayed Golden Hour on my body, it was, in a word, overwhelming. I'm not too fond of the scent of citronella and I found this bug repellent to be extremely citronella-y — like those outdoor candles you can buy to put on the patio or the deck to ward off bugs. But it's a small price to pay when you think about the fact that it doesn't contain any DEET or synthetic fragrances and only uses ingredients that are approved by the EWG (Environment Working Group).

The repellent sprays on easily, goes on clear, and dries quickly without leaving behind an oily residue. I sprayed it a few times over my hands and legs and a couple times over my arms and shoulders. When I was outside for longer than two hours, I would reapply it, as directed. After a couple days of using Golden Hour, I got used the citronella smell and instead noticed the vanilla, clove, and lemongrass. It was still very aromatic, but it wasn't bad and smelled almost sweet.

Over the course of five days, I went through the entire 3 oz. bottle (however, I did share it with my husband). My mosquito bite count? One tiny chomp, which was pretty astounding considering how much I did outside. I spent time at numerous beaches, hiked up through a tropical rainforest, and watched the sunset with my two naked feet planted in damp, grassy patches. In other words, I was asking to be bit. But I didn't even notice any mosquitoes flying around me at all — I think they must have been avoiding me entirely! Meanwhile, my sisters, brothers, nieces, and nephews were covered with bites. The fact that I walked away nearly mosquito bite-free was pretty much a miracle. And the best part is I didn't have to worry about any of the troublesome ingredients or potential harmful effects that came with my typical DEET-filled bug sprays of the past. I'm officially a Kinfield convert.

More like this
TikTok Says "Mewing" Will Sculpt Your Jawline — But Does It Work?
By Rachel Lapidos
The "Cloud Skin" Trend Is An Updated Way To Wear Matte Makeup
By Jordan Murray
BeautyBio’s GLOfacial Pore Cleansing Tool Is So Grossly Satisfying
By Erin Stovall
This Week’s New Makeup Releases & More Beauty Headlines
By Audrey Noble
Get Even More From Bustle — Sign Up For The Newsletter