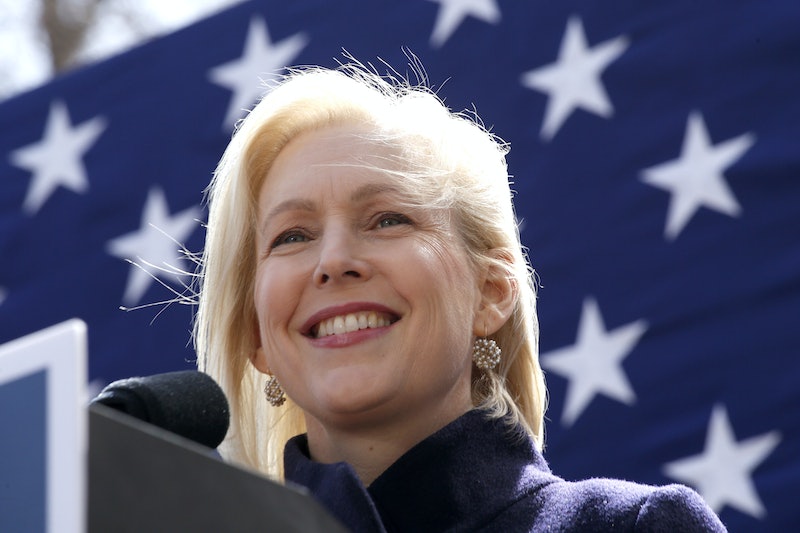 On Tuesday evening, one of the Democratic candidates for president participated in a CNN Town Hall, clarifying some of her changed stances on hot-topic issues. Sen. Kirsten Gillibrand said her immigration views changed massively after she became a U.S. senator, and took the time to explain why her immigration policies were so conservative when she was a state representative for New York.

Gillibrand's previous policies and positions have been a topic of much conversation ever since she announced her presidential bid. As CNN notes, the Democratic senator used to hold an A-rating from the NRA, and declared the need to secure the border a "national security priority" during her time in the New York House of Representatives. Additionally, she opposed providing amnesty for illegal immigrants, and also voted to increase funding for ICE, per the news network.

On Tuesday night, Gillibrand sought to set the record straight on her old stances. During the town hall, she said,

When I was a member of Congress from upstate New York, I was really focused on the priorities of my district. When I became senator of the entire state, I recognized that some of my views really did need to change. They were not thoughtful enough and didn’t care enough about people outside of the original upstate New York district that I represented. So, I learned.

Gillibrand admitted that she was "ashamed" of her former policies. She further said that she now believes people should treat one another the way they'd like to be treated.

Though Gillibrand has talked about her change of beliefs on a number of occasions in the past, her presidential campaign site makes no mention of her immigration policies. The question of apparent border security and immigration policies in general are not mentioned on her "issues" page at all. On her Senate site, though, she does clarify her immigration policies, which include defending and protecting the rights of DREAMers, supporting Temporary Protected Status for immigrants fleeing persecution, and working on comprehensive immigration reform that provides paths to citizenship for those living in the United States.

On Tuesday evening, Gillibrand shed further light on her current stance on immigration as a presidential candidate. She said in part,

... I would change entirely what we do at the border. I would make sure people seeking asylum in this country would have access to real immigration judges and lawyers. I would make sure that the process was humane, and I would take all of that work, the enforcement removal operations, and I would put it out of the homeland security and put it in the Department of Justice.

Gillibrand's conclusion was simultaneously an attack on the president and a declaration of her own immigration policy. She said, "We can keep our border safe, and we can invest in border security, but we do not need to treat people in the way President Trump has."