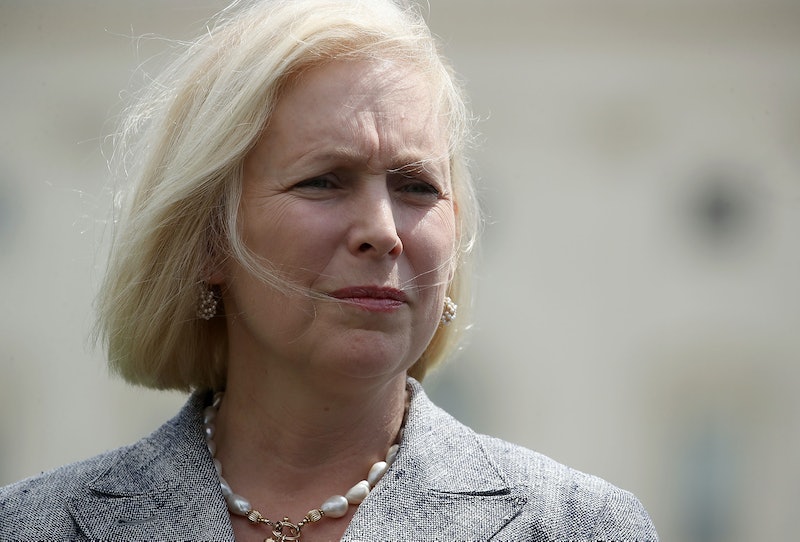 Sen. Kirsten Gillibrand is under fire for speaking out against a former colleague, according to The Huffington Post, and the backlash is coming from within her own political party, including Democrat funder and billionaire George Soros. Journalist Amanda Terkel reported that the anger over Gillibrand calling for former senator Al Franken's resignation has lingered, including among top Democratic donors.

Last year, Franken, a former Minnesota senator, stepped down after several women accused him of groping them without their consent. Franken apologized for some of his behavior but said that he remembers other interactions differently. On the Senate floor on Dec. 7, a solemn-faced Franken said, "Over the last few weeks, a number of women have come forward to talk about how they felt my actions had affected them. I was shocked. I was upset. But in responding to their claims, I also wanted to be respectful of that broader conversation, because all women deserve to be heard, and their experiences taken seriously."

Of the senators who called for Franken's resignation, Terkel reported, Gillibrand was the first. Now, the New York senator is facing disapproval from fellow Democrats, particularly donors, who told The Huffington Post that Gillibrand should have waited before rebuking Franken. Gillibrand, however, has not given in.

In a statement to The Huffington Post, she said, "If standing up for women who have been wronged makes George Soros mad, that’s on him. But I won’t hesitate to always do what I think is right. For nearly a year, we have seen countless acts of courage as women and men have spoken hard truths about sexual assault and sexual harassment and demanded accountability."

The criticism surrounding Gillibrand may affect her in 2020 if she decides to run as a Democratic candidate. Powerful donors like Soros have already expressed their issue with her. In comments to The Washington Post, Soros briefly spoke of Gillibrand saying that the New York senator called for Franken's resignation "in order to improve her chances."

People like Soros are joined by others who told The Huffington Post of their displeasure with Gillibrand. A New York donor named Rosalind Fink told the media website, "I viewed it as self-serving, as opportunistic ― unforgivable in my view. Since then, I have not purposely attended any fundraiser where she was there. And there is absolutely no way I will support her."

Others have called her an "opportunist" and her resignation call, a "mistake." Bustle has reached out to Gillibrand for comment on the reported backlash and will update accordingly.

There are also those who do not agree with snubbing Gillibrand. Donors like Risa Levine told The Huffington Post that the issue at hand was Franken's alleged sexual harassment, not Gillibrand's support for him to step down from his position. "Why are we blaming Sen. Gillibrand for what Sen. Franken did? Why are we making this about her? It’s not about her," Levine said.

All of the remarks, including Soros', has yet to bring Gillibrand down. In her statement to The Huffington Post, the New York senator spelled out where her loyalty lied. "I stand with them in this new watershed moment of important change in our society on what we deem as acceptable," Gillibrand said. "It is clear that we must put our morals and the valuing of women ahead of party loyalty. When someone does something wrong, you have to speak up and be counted, whether it’s President Trump, or a Democratic colleague."