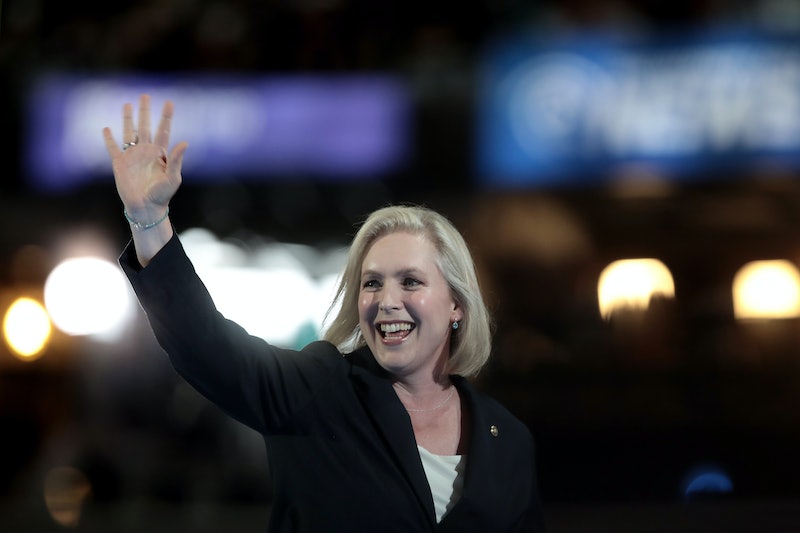 While speaking at the Personal Democracy Forum at New York University Friday, Sen. Kirsten Gillibrand eschewed the rules of decorum in favor of speaking her mind — and dropped some f-bombs along the way. It certainly turned some heads, but in the Trump era, with all pretense of decorum seemingly thrown out the window, Gillibrand's passionate speech — curse words and all — is exactly what the left needs: Fire, verve, and a little bit of rule-breaking.

In her discussion of the president and how his term has gone so far, the New York junior senator's speech veered away from what some might consider strictly appropriate. "What about President Trump? Has he kept any of these promises? No. F*** no," she reportedly said, and she wasn't done. Her comments on Congress took a similar tone: “If we are not helping people, we should go the f*** home."

While her employment of curse words has garnered a predictably scolding response from the right, Gillibrand's fellow Democrats have had only positive things to say. Speaking to CNN, Minnesota Sen. Amy Klobuchar said, "Kirsten is very passionate about the people she represents in New York State, and she doesn't like what [President Trump] is doing ... I've always enjoyed that she's someone who speaks her mind, and she decided to do it at that moment."

Considering the state of American politics — the president's penchant for touting conspiracies, a hostile foreign power potentially having meddled in the U.S. election, and Congress is working to strip health care from a reported 23 million people — if there's a time to be frustrated, it certainly would be now. Yet we've still been seeing a lot of reasoned, calm responses from Democratic leaders in Washington. Gillibrand's fiery public response, on the other hand, is exactly the jolt of passion that the party needs. It's a rallying cry, a lightning rod for the storms of frustration that have been roiling in our heads.

Gillibrand has said that she won't run for president in 2020, but perhaps those looking to represent the Democratic Party should take a leaf out of her book — at least in terms of her no-nonsense approach.

And really, Gillibrand is speaking for all of us. Who hasn't found herself cursing at the TV at some point in the last seven months? Who hasn't let slip a four-letter-word in a moment of passion? This isn't buckling under the standard laid out in Michelle Obama's now-famous maxim "when they go low, we go high," because expressing a passion for helping people and resisting Trump does count as going high, no matter the words used. Gillibrand was speaking with honest and passion — and that is exactly what we need to rally around right now.