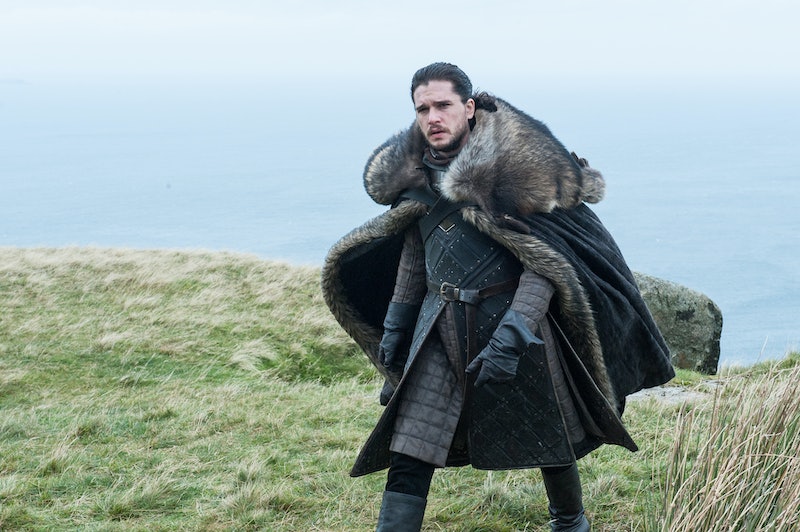 It's difficult saying goodbye to a beloved TV show, but when it comes to a series like Game of Thrones, the thought of it no longer existing feels downright cruel. And yet, when the show returns for its eighth and final season, that will be a reality many fans will be forced to face. But while the cast is doing a good job of keeping plot details under wraps, Kit Harington's recent comments about how Game of Thrones ends will make you hope for the best and fear the worst all at the same time.

During a recent press event, Bustle had the chance to briefly chat with Harington about the upcoming season. However, when asked if there were any moments throughout Season 8 that really shocked him, Harington revealed that the best piece of intel he can give these days is no intel at all for fear that his words will get twisted around or misunderstood. "Usually, I'd be able to say something, but I've noticed anything I've said about the new season people think is a clue," Harington told Bustle. "I'm just not gonna even say anything surprised me if it didn't or it did, because then I just get quoted on it somewhere. And it's, I think it's safe just to say nothing."

At the very least, you have to appreciate the symmetry of that statement. Jon Snow knows nothing and his real-life counterpart says nothing. So really, they're the perfect fit.

Honestly, it's understandable why the actor is hesitant to comment on the matter, given that any detail he offers up can be spun into a wild theory. Speaking of which, Harington did admit that out of all the theories he's heard of, most of them don't come anywhere close to being accurate. "Generally, they're quite wide on the mark, which is good," he explained. "It's what's keeping everyone on their toes."

He's not wrong about that. Even Harington's comment about not commenting is enough to possibly send fans' minds into overdrive. With no clues to go on, Jon Snow's fate could play out in a variety of ways. He could end up killing Daenerys once he realizes his true claim to the Iron Throne, or she could be the one to kill him. He could face-off against the Night's King or totally bail on all of his responsibilities and live on a remote island somewhere. (OK, so that last one is probably the least likely to happen, but a girl can dream!)

The mind reels at all the options that could befall this former Commander of the Night's Watch. But according to Harington, any theories we can think of are generally wrong, so what's the point? We, much like Jon Snow, know nothing and it will undoubtedly stay that way until Game of Thrones returns in 2019. And even then we'll still probably be left with a ton of questions. Then again, that's the beauty of this show — it always leaves us wanting more.