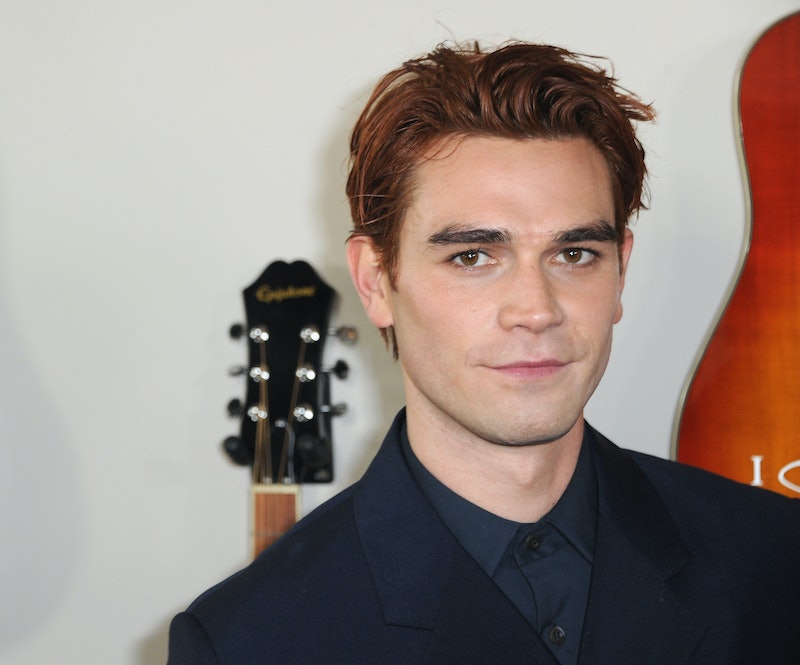 While one Riverdale star was arrested while protesting the murder of George Floyd by police officers, another one is intentionally staying more quiet about the subject. Taking to Twitter on Sunday, June 14, KJ Apa defended his choice to not post about Black Lives Matter on social media. And while some fans are understanding of his viewpoint, others aren't buying it.

It all started when YouTuber Elijah Daniel asked on Twitter why Apa wasn't using his platform to speak about Black Lives Matter. Aside from posting a black square to commemorate Blackout Tuesday, Apa's silence was especially notable to Daniel given the actor's role in The Hate U Give, an important film about the dangers of police brutality in the Black community.

Apa responded to the tweet directly to explain his stance, seemingly confirming that though he has attended Black Lives Matter protests, he's just chosen not to share his experiences. Apa just doesn't want to post about his beliefs online — nor does he feel compelled to. "I don’t need to post about my opinions and beliefs in order for them to be real to me," he wrote. "I support black lives — but I don’t feel it’s necessary to prove to people I do by posting my attendance at these protests."

Apa seemingly has been protesting and supporting the cause in recent weeks, as he posted a picture of graffiti that says "Being Black is not a crime" at an L.A. tire station to his Instagram Story back in late May. This is around the same time that his Riverdale co-star Cole Sprouse, whom he has reportedly been quarantining with, was arrested in Santa Monica while protesting.

However, his defense wasn't enough for some fans, who urged Apa to use his huge platform to promote the BLM movement. "I hope you realise that 'I don’t need to post about my opinions and beliefs in order for them to be real to me' just shows how privileged you really are," one fan responded, with another explaining that the point of posting was to "spread awareness and give resources to your followers to help," and not to "prove anything." Some also pointed to his co-star Vanessa Morgan's message about the necessity of white allies speaking out about BLM.

Apa has not responded to the comments, but he did post a 1993 video of Tupac Shakur speaking on racial inequality to his Instagram Story on the same day, reassuring fans that he remains on the right side of history.

More like this
'The Queen’s Gambit' Season 2 Tweet Wasn’t From Anya Taylor-Joy
By Mary Kate McGrath, Jack Irvin and Grace Wehniainen
Netflix Shut Down 'Bridgerton' S3 Rumours About A “Very Dark” Storyline
By Bustle
RHOP’s Robyn Dixon Explained Why Juan Paid For Another Woman's Hotel Room
By Brad Witter
Pamela Anderson's Sons Brandon & Dylan Have Their Own Hollywood Careers
By Arya Roshanian
Get Even More From Bustle — Sign Up For The Newsletter
From hair trends to relationship advice, our daily newsletter has everything you need to sound like a person who’s on TikTok, even if you aren’t.