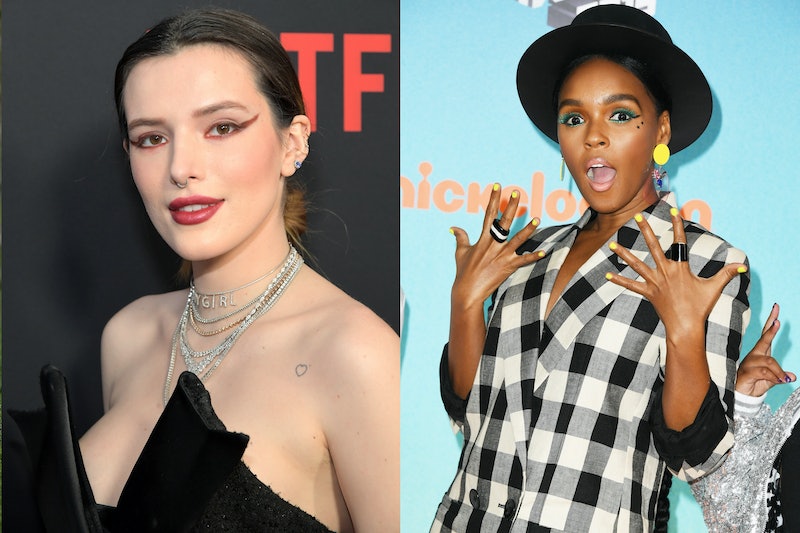 While a lot of narratives about LGBTQ folks center the coming out experience as a singular act, many LGBTQ people will tell you that coming out is in no way a singular process; in fact, the LGBTQ label you identify with may change throughout your life, and that's totally OK. A famous example of this is singer, songwriter, actor, and producer Janelle Monae, who famously told Rolling Stone in 2018 that she initially came out as bisexual “but then later I read about pansexuality and was like, ‘Oh, these are things that I identify with too.’ I’m open to learning more about who I am.” More recently, actor and singer Bella Thorne came out as pansexual after being out on Twitter as bisexual for three years. But these label transformations don’t just happen in the realm of celebrities, because people all across LGBTQ communities are constantly learning which labels may fit them better than the ones they identified with before.

As knowledge about different queer identity labels spread, people gain access to more and more ways to describe themselves accurately. But you don’t have to buy into the anti-historical, often cisheteronormative, point of view that emerging LGBTQ+ labels are ‘new inventions of a younger generation.’ Instead, you should know that a large variety of labels have been created throughout history to define and identify a vast diversity of queer experiences. Trans researcher and author Alex Myles refutes the idea that ‘new labels’ are ‘new phenomena,’ reminding queer communities in a 2018 Slate article that without growing our queer vocabulary (which the rest of society does all the time), we risk alienating those who need the community the most.

An anonymous 21-year-old genderqueer queer person (genderqueer referring to her gender identity, queer referring to her sexuality) tells Bustle that when she first came out, she identified as a trans man. “I didn’t feel right in my body,” she says. “I couldn’t find a state that felt comfortable.” And identifying as a trans man “gave me a sense of peace” that, at the time, she couldn’t find in another label. Oppressive family dynamics didn’t give her the space to explore her gender further, but when she got to college, she says that she had new freedom to explore herself more. “I realized that I wasn’t quite a man,” she says, “but I wasn’t a woman. Now, I don’t really assign labels to my gender.”

She goes on to say that there are limits to all vocabulary, and that she feels “OK with [the fact] that I bounced around with a lot of trans identities, including nonbinary, but it still didn’t fit perfectly.” Other trans folks, such as an anonymous 21-year-old transman, tells Bustle that he has gone from identifying as bi to lesbian, to aro/ace and from rom non-binary to transman. Lane, 23, had a similar experience, journeying to find labels that give him joy: “When I found out about genderfluidity,” he says, “I was like 'oh hey that makes sense maybe I’m that!'"

And these gender journeys often accompany all kinds of orientation journeys as well. Syler, a 23-year-old queer person, says that he came out as “asexual at 14, then lesbian, then ace lesbian, then pansexual,” but now identifies as “a pan-oriented aroace and nonbinary trans guy! That’s a mouthful, so usually, I just say queer.”

"Give yourself time and the freedom to change your mind. Try to find the joy in [the process]"

Liam, a queer person in his early 30s, also uses queer to describe the plethora of adventures his gender and sexuality journeys have taken him on. “‘Queer’ felt more inclusive and more subversive,” he tells Bustle. “It encompassed messing with gender roles and expectations in ways I was just barely starting to allow myself to explore.” Liam says that he had to work his way "through a bunch of different labels" because he "literally didn’t have the language to express who I was.”

Once you find that language, though, Liam emphasizes that it doesn’t have to be permanent. “Find the places and people where you can test out labels and see what feels good, in your chest and in the pit of your stomach,” he says. “Even if it’s just online, to start. Maybe don’t tell everyone what your labels are immediately or go around changing your legal name right away, though — give yourself time and the freedom to change your mind. Try to find the joy in [the process].”

“Don’t push it or force it," the anonymous 21-year-old genderqueer queer person tells Bustle. "You may be extremely uncomfortable now, or struggling, but it won’t be like that for forever. Find people that you feel comfortable with and who you can be fully accepted with. Because that's when you'll feel the most at peace.”

Similarly, Lukas, 28, a bisexual, transmasculine, nonbinary person, says that he was “was reminded recently that ‘growth is not linear.’” They tell Bustle that “this phrase may have saved my life.” While people might be surprised when celebrities announce they identify with a different label within LGBTQ communities, it's important to remember that this is a common LGBTQ experience. And this experience mirrors exactly what labels are supposed to do anyway: bring peace, affirmation, and community to marginalized people who need and deserve support and self-love.