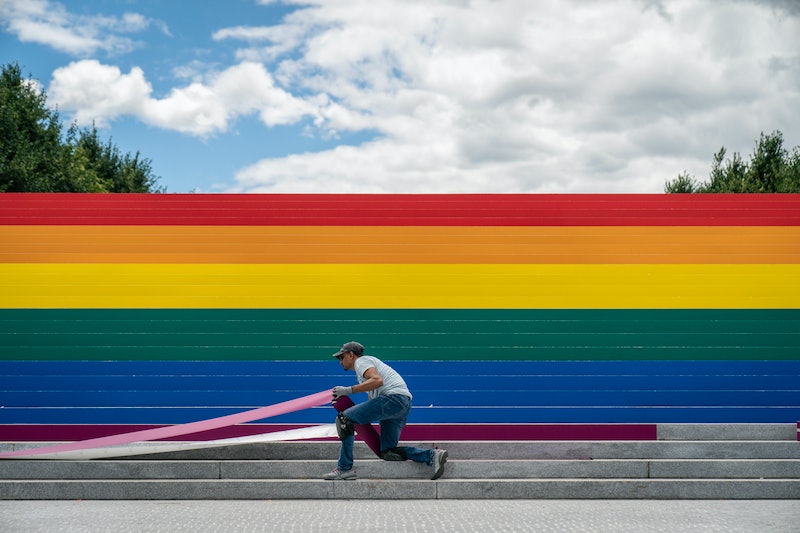 People often refer to "the LGBTQ community" as though it's one united thing. But this singular phrase is a huge misnomer: there are many communities within the broad and diverse alphabet soup umbrella that are not necessarily represented by the letters L, G, B, or T (hence, why some people say LGBTQ+). Emerging queer identities like asexuality, demisexuality, and pansexuality are often left out of discussions around the LGBTQ community, simply because these labels aren't literally LGBT.

It's important to note that most terms in LGBTQ canon aren't terribly old: queer linguistic history is all about reclaiming slurs, such as "queer" itself, and coming up with new terms to describe feelings and experiences that people have had throughout history. Two classic examples that people use are that men who had sex with men in ancient Greece didn't call themselves gay or bi, but there certainly was sex between men. The term "Boston marriages" was used to refer to relationships between two women that no one would call a lesbian relationship: saying, "This is my roommate of literally 50 years" implied a romantic relationship without offending the social mores of the time. Labels evolve, but feelings and experiences have transcended time.

In the late 19th century, Oscar Wilde's infamous trial accused him of "gross indecency" for being romantically and sexually involved with another man. During the trial, same-gender love was termed "the love that dare not speak its name." Since then, many researchers have concluded that having labels can create vitally important and life-saving community. Trans researcher and author Alex Myers writes, "If the feeling an individual has “dares not speak its name,” then how is one to find others who share that feeling? These labels — all of them, not just the original one or two or three — play a necessary role in generating solidarity."

This is true, too, of newer, less commonly used labels. For example, the term "asexual" wasn't used to describe a general lack of sexual attraction and lust to other people until a couple decades ago, Michael Waters wrote for The Outline in 2018. However, similarly to LGBT experiences, it seems pretty clear that people who we would call ace today existed then. British feminist Mary Wolstenholme Elmy, for example, spoke of sex as a horrific burden in her book Phases of Love. However, she also writes about the joys of "psychic love" and intimacy without the need for sexual attraction. This is strikingly similar to modern descriptions of ace experiences.

Many people who identify with these queer labels, both new and old, tell Bustle they have a difficult time feeling at home in these labels.

This history is only just beginning to be excavated, often by the same online communities that provide community for people whose queer experiences might always not be represented. The rise of these communities have facilitated a flourishing of queer language that can be broad or highly specific. The aromantic spectrum, for example, encompasses people who may experience sexual, but not romantic, attraction. The asexual spectrum comprises people who may experience romantic, but not sexual, attraction. And being aroace identifies you as being on both of these spectrums. The more people learn about themselves, the more labels are coming into being, but that doesn't mean the experiences are new.

Still, many people who identify with these queer labels, both new and old, tell Bustle they have a difficult time feeling at home in these labels due to internalized biphobia and internal senses of being “not queer enough.” For example, Lucy, a 24-year-old panromantic person — she experiences romantic attraction, regardless of a person's gender — has struggled with internalized biphobia, “which made me think it made me ‘not gay enough’ to be part of an LGBTQ+ community. In the case of internalized biphobia — like internalized transphobia or internalized misogyny — the false notions that "bisexuality isn't real" and "it's just a stepping stone to being gay" makes many people question the authenticity of their own experiences, leaving many chronically unsure about their identity.

However, finding community can help combat these pains. Experiencing only romantic attraction to men accompanied by romantic and sexual attraction to folks of other genders encouraged this person to seek community with bi and pan people on Tumblr: “I love the bi and pan pockets of the community,” Lucy says, “because they are so open and welcoming. There is so little gatekeeping and so much love.”

This gatekeeping — aka, when people impose arbitrary or false limits on what qualifies as being part of the community — also impacted 21-year-old Saylor, who identifies as asexual and also has several LGBT identities. “It took me forever to come to terms with things and properly identify,” she says, “because I felt like something was wrong with me” for not experiencing the “lust” that many talk about regarding sexual attraction. Saylor goes on to explain that while other parts of her LGBT identity are validated by the broader community, “when it comes to asexuality, things tend to take a turn for the worse with acceptance in the LGBT community.” Much like cis people who are LGB can be unwelcoming to trans people, many LGBT people falsely believe that there isn't "enough room" to fight multiple battles against oppression at once. These beliefs often becoming targeted against people who identify with emerging queer labels.

A 29-year-old anonymous gray asexual — she identifies as being on the asexual spectrum, but says asexual isn't quite the perfect descriptor — who is also a woman who loves women (wlw) says that having queer friends is helpful for receiving validation and community. Like Saylor, she acknowledges that having an LGBT identity in addition to identifying on the asexual spectrum can make it “much easier for me to blend in.” She says that Tumblr has been a valuable resource, especially for queer youth of color, to help people figure out their gender and sexuality journeys, because it provides a simultaneously private and public space to explore your identities and experiences. In this case of this 29-year-old, there was also a lot of Googling demisexuality to find that "gray ace" was the banner that feels best.

A 24-year-old demisexual and pansexual woman tells Bustle that she finds that the two identities are very connected for her. Her demisexuality means that her attractions form based on strong emotional connections, and this “kind of drives my entire sexuality, where it really strongly limits the number of people I am attracted to." Inversely, her pansexuality “also opens up the number of people I can be attracted to via pansexuality.” In discovering these nuances about herself, visibility was key: “Natasha Negovanlis, who plays Carmilla [the sapphic vampire webseries], was … very open about being pansexual, which really helped normalize it for me,” she says.

This normalization is critical to embracing one’s own identities, especially when cis-heteronormative social pressures insist that all people should experience sexual and romantic attraction, in similar and related ways. An anonymous demi and pan woman tells Bustle, “It took me a bit to realize why I never was able to relate to conversations about attractive celebrities and my relative lack of IRL crushes."

An anonymous aromantic and asexual (aroace) woman also cites the struggles that arise from popular media's lack of representation and discussion of aroace experiences: "Because I lack romantic attraction, I have trouble getting invested in stories that are purely romance-based." This lack of connection led to a fear of abandonment: "As a teenager," she says, "my main challenge in accepting this identity was my belief that all my friends would leave me for romantic relationships, but I think that was just fueled by media."

She learned about aromantic identities largely through Tumblr, which she says has since grown toxic for her and other aroace people because of hostility from other LGBT people. However, her own LGBTQ+ community has helped foster pride in her aroace identity and experiences. "My love isn’t inferior to romantic love," she says. "It’s just slightly different... [It] isn’t straight. Heteronormativity affects me. I grew up believing that I had to marry a man and have kids, neither of which I wanted to do. I faked crushes on boys growing up. I had my mother initially not believe me when I came out to her. I’ve suffered through forced hetero love plot after forced hetero love plot."

Similarly, the 24-year-old anonymous demi and pan woman says, "Once I realized those somewhat major disconnects made sense with my identity and sexuality, I never looked back.” Where people and society (including in LGBTQ+ communities) insist on minimizing her demisexuality, she says, “I specifically seek out safe spaces and safe people.” This is crucial and common for people with various marginalized identities.

This space is too often hard to find, even for people with L, G, B, or T identities. Different segments of the LGBT community have strong histories of rejecting its own in different contexts: when gatekeeping is deployed against people from all sides, it can often spur even more gatekeeping against others. For example, biphobia and transphobia exist even in lesbian and gay communities. For another example, queer communities of color have rich histories of art, activism, and leadership, but these histories are often elided by histories of racism within white LGBTQ+ communities. Queer people with disabilities are also too often marginalized in non-disabled queer communities.

A recent study published in the Journal of Research on Adolescence suggests that this renewed form of LGBT gatekeeping against people with newer identity labels is hurting many teenagers: Across race and class lines, 26% of young people studied identified with "emerging sexual identity labels" like those described above. The prevalence of these labels proves the importance of continuing to unpack assumptions about what identities and experiences make someone “queer enough.” Because as Saylor says, when people do the work of creating more space, it can give people the brilliant revelation of “there’s a word for what I feel!”, and all the found community that the revelation comes with.