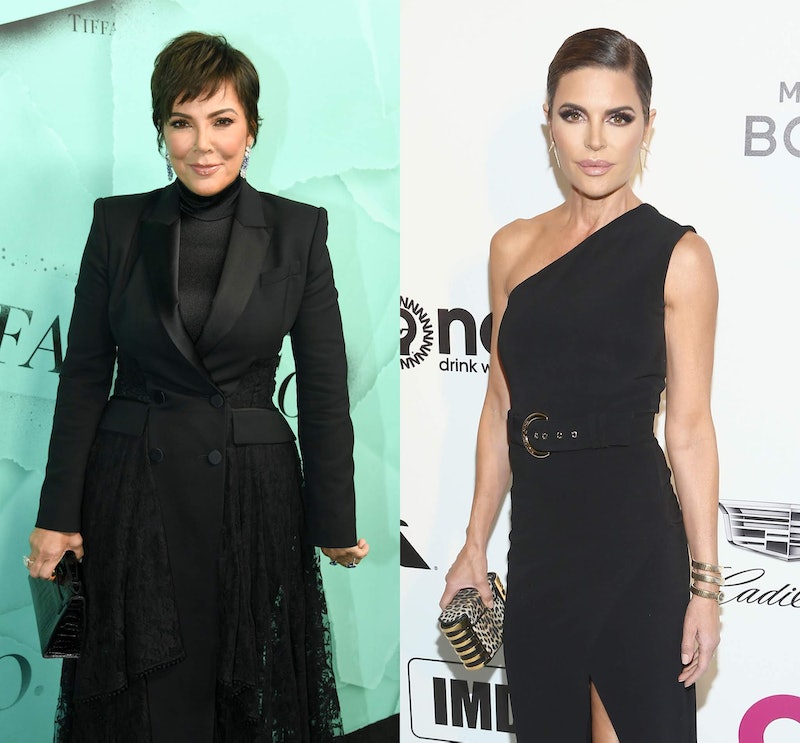 Buckle up, Marvel Cinematic Universe fans, because there is a new MCU in town: the Momager Cinematic Universe. And it is all thanks to Kris Jenner and Lisa Rinna’s Captain Marvel ad. The promo, which premiered on E! on Sunday night, may very well be the most delightful thing you will see this week. Why are Jenner and Rinna in a Captain Marvel ad, you wonder? Because if you get the chance to put Jenner and Rinna in a Captain Marvel ad and let them run around in '90s fashions and talk about rewinding VHS tapes, then you embrace that chance with both arms. (And yes, those arms are clothed in a bright green power blazer.) So go ahead and drink this advertisement in like it is a two-liter bottle of Surge that you grabbed from the fridge next to the movie rental counter.

Set in the 1990s, the promo opens on reality TV goddesses Rinna and Jenner pulling up to Blockbuster Video. As they park in front of the once-ubiquitous movie rental store, Jenner asks Rinna if she remembered to rewind the tower of VHS tapes she is clutching. The soap actor-turned-Real Housewives of Beverly Hills cast member tells Jenner that she has been too busy styling her iconic ‘do to be kind and rewind.

Just as Rinna is about to drop her not-rewound tapes in the store’s return slot, Brie Larson, er, Captain Marvel falls from the sky and crash-lands inside the Blockbuster. Captain Marvel stands up in the rubble and stares at Jenner and Rinna. The Keeping Up with the Kardashians star flips her giant mobile phone open and goes full momager. It is fun. It is goofy. It is perfect.

This weird and wonderful Captain Marvel advertisement may not be every Marvel fan's cup of a tea (maybe you've heard rumblings about this, but uh, there are a lot of people who have strong feelings about the Kardashian-Jenner family), but it is definitely my cup of tea. It is my pitcher of tea. It is my gallon of sun tea on a hot summer day. I want to take a nap on a raft that is floating in a pool that is filled with this tea.

And duh, I am not the only one who is extremely here for this MCU/KUWTK/RHOBH mashup.

Long live the Keeping Up with the Real Beverly Hills Cinematic Universe.

This promo really does seem too good to be true. But it is true, and for that I am thankful.

I did not know I needed Rinna and Jenner and Carol Danvers and Blockbuster and VHS tapes together on the small screen, but now that this ad is in my life, I do not know how I made it this long without it.