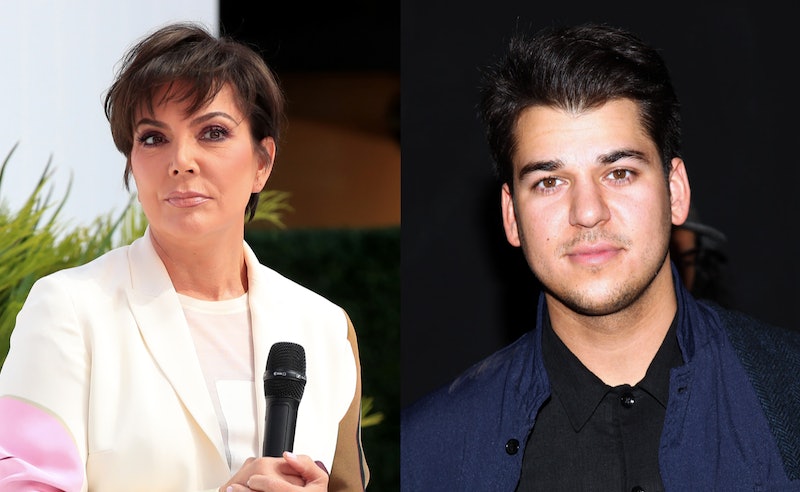 You may not see Rob Kardashian much on Season 15 of Keeping Up With the Kardashians. But according to his momager, there's a good reason. Kris Jenner gave an update on Rob Kardashian's health in an interview with Us Weekly. And she revealed everything you might be wondering about Kardashian's wellness journey.

When asked about how her son is doing, Jenner told the publication, "Rob is good. He’s doing better and better." She continued to say that he's currently focused on maintaining healthy living habits. As you might recall, in recent seasons of KUWTK, Kardashian has been open about struggles with his weight. He's even been vocal about dealing with diabetes, which he has battled on and off ever since he was originally diagnosed in December 2015, per People. Jenner told Us Weekly,

"He’s working on his health and learning more and more about what it’s like to live with kind of the leftovers of the diabetes that he struggles with from time to time."

If you were expecting to keep up with Kardashian's wellness journey on the family's reality series, you're pretty much out of luck. According to the matriarch, her son took a bit of a backseat in Season 15. "I think we’ll probably see Rob more in [Season] 16 than in 15," Jenner said. She explained there was simply too much going on in the rest of the family's lives that they weren't able to show everything they had going on, which makes total sense. There were, after all, three new additions to the KarJenner crew in the span of four months. That's enough to keep any family pretty busy — let alone a super famous one.

Since everyone was busy welcoming babies and all, she also said that "Rob was doing his own thing” during this time. But at least, according to Jenner, you can expect to see more of Kardashian in the next season of the show, even though he's taking some time off this go-around.

As of late, he's made several appearances on the E! series, with his latest occurring in a January 2018 episode, per IMDb. Of course, his recent presence on KUWTK comes after he spent some time away from the series and the limelight, because he wasn't happy with his appearance, according to his August 2016 interview with People. When he does appear on the show now, Kardashian's focus is on his daughter Dream and his wellness journey. In Season 13, he was so dedicated to improving his health that he sought help from a life coach, Jamel Davenport. And it really seemed like his time with Davenport was a positive experience for him, as he said he trusts his coach's process.

So, it may be some time until fans of the famous family get a glimpse at how well he's doing on the reality series itself. But whether it's the progress he's shown on KUWTK or this recent update from Jenner, rest assured it does seem as though Kardashian is taking his wellness seriously.