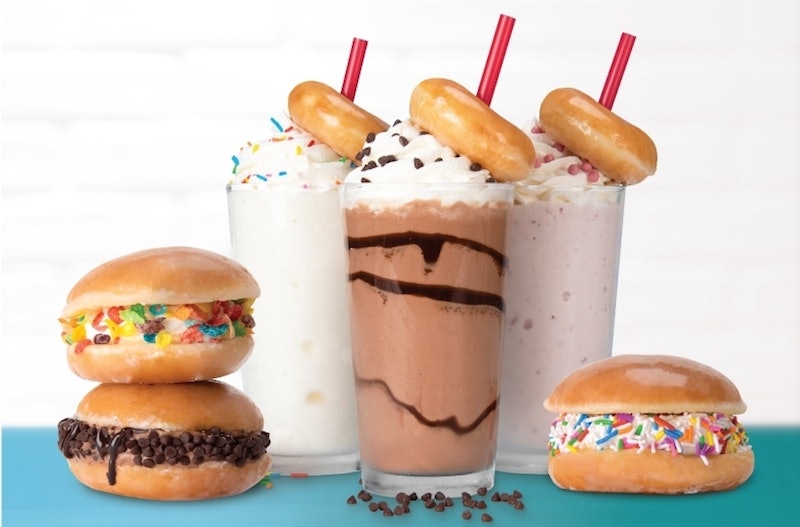 Krispy Kreme fans in Concord, North Carolina are in for a treat. Well, lots of treats, actually. The chain is about to open a new location in the city, and it will be the first one to feature three new menu items: Kripsy Kreme milkshakes, ice cream sandwiches, and customizable doughnuts. And, yes, the milkshakes and ice cream sandwiches both very much involve doughnuts.

The ice cream used for the new milkshakes and "scoop sandwiches", will be Original Glazed Doughnut infused ice cream. So, ice cream that tastes like a Krispy Kreme doughnut — not a bad idea. And while that sounds like a lot of flavor on its own, the hand-spun milkshakes come in five options: Vanilla Glazed, Double Chocolate, Salty Caramel, Classic Strawberry, and Oreo Cookies & Kreme. Each milkshake is also topped with whipped cream and a mini Original Glazed Doughnut. You know, in case it wasn't clear enough that this thing is doughnut-flavored.

As for the scoop sandwiches, if you couldn't guess, those are ice cream sandwiches where the cookies or wafers are replaced with a cut in half doughnut. It's doughnut ice cream on a doughnut. These come in six varieties of topping and drizzle flavors: Vanilla Sprinkled, Triple Chocolate, Cookies & Kreme, Vanilla Chip, Chocolatey Caramel Coconut, and Vanilla Fruity Crunch.

Other than the new ice cream options, the new location will have customizable doughnuts that allow customers to create their own doughnut out of five different glazes, five drizzle flavors, and ten toppings. These will be available in three-packs and half-dozens.

For now, the new menu items will only be available at the location in Concord, North Carolina, which opens on Tuesday, July 23. The new store is one of 45 new locations that Krispy Kreme plans to open through 2020, and the brand calls it "a taste of what’s to come," which is good news for anyone outside of the Concord area who wants to try a milkshake or scoop sandwich.

The new shop also has a new design compared to the ones that are already around, including "an enhanced doughnut theater experience, offering an end-to-end view of the doughnut making process" and "online ordering, delivery, in-shop self-service pickup, dedicated parking for mobile order pickup, and an expanded drive-thru with two lanes and digital order confirmation," according to Krispy Kreme's press release. The brand notes that it is also remodeling existing locations.

If you aren't in Concord, but are now very much craving doughnuts, Krispy Kreme does have a new menu item that's available across the country. The company recently introduced Original Filled Doughnuts to coincide with the 50th anniversary of the Moon Landing. What do filled doughnuts have to do with the moon landing? Well, not much. But because these are filled doughnuts that are shaped like regular doughnuts — which means each bite has the same filling-to-doughnut ratio — Krispy Kreme marketed them as "One small bite for man, one giant leap for doughnut kind." Anyway, they come in two flavors: Chocolate Kreme and Original Kreme and are still available now.

But, that's just for everyone else. Concord residents, go forth and enjoy the new items. Just be sure to report back.

More like this
12 Aphrodisiac Desserts To Spice Up Your Valentine’s Day
By Kaitlyn Wylde
15 Black-Owned Liquor & Wine Brands To Add To Your Bar Cart
By Alexis Morillo
Learning To Love, Not Judge, The Lunchbox Wives Of TikTok
By Esther Zuckerman
Dolly Parton Released 4 New Baking Mixes With Duncan Hines
By Alexis Morillo
Get Even More From Bustle — Sign Up For The Newsletter
From hair trends to relationship advice, our daily newsletter has everything you need to sound like a person who’s on TikTok, even if you aren’t.