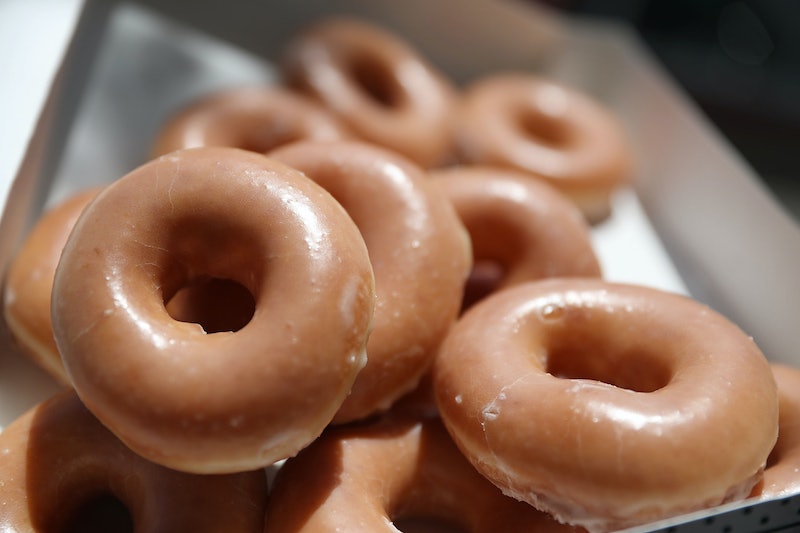 Excellent news, doughnut lovers: It’s Dec. 12, which means it’s time for the 2018 edition of the Day Of The Dozens promo at Krispy Kreme! That means you can get a dozen Krispy Kreme doughnuts for just a dollar at any participating location in the United States today. A returning favorite, the promo has been an annual Krispy Kreme tradition since 2012, according to the website Tasty Gardener. The tradition may therefore be quite recent — but hey, 2018 marks the promo’s sixth year running. That’s not nothing — and if it means cheap doughnuts? Well, let’s just say most of us are probably on board for that.

The details of the Day Of The Dozens deal tend to vary from year to year. In 2016, for example, a dozen Original Glazed doughnuts cost $4.99 instead of the usual $8-ish, with no other purchase necessary; meanwhile, in 2015, buying a dozen Original Glazed doughnuts at full price netted you a second dozen free. No matter the differences, though, the result is always the same: More doughnuts for less, and the opportunity to share the wealth among your nearest and dearest. It’s a tradition looked forward to by Krispy Kreme enthusiasts everywhere, and it’s not hard to see why. Who doesn't like a good doughnut?

In 2018, the deal first requires you to buy a dozen Krispy Kreme doughnuts of any variety. Once you’ve done that, you’re entitled to a second dozen — this time just Original Glazed doughnuts — for a mere $1. There’s a limit of two per customer, so the most you’ll be able to walk away from a single Krispy Kreme location with is four dozen doughnuts — two full price, and the additional two for a total of $2. That’s a lot of doughnuts, so why not treat your coworkers or best pals to a pastry or two?

Krispy Kreme itself goes back much further than the Day Of The Dozens deal, of course. Founder Vernon Rudolph opened the first Krispy Kreme shop in Winston-Salem, NC in 1937 — although the doughnut recipe itself has a somewhat murky history: As the Daily Meal pointed out in 2016, there are multiple origin stories floating around, none of which have been conclusively determined to be the true story. Regardless, though, that recipe turned out to be a hit — and now, more than 80 years later, there are more than 1,400 Krispy Kreme shops spread out across 33 countries, with an additional 12,000 grocery and convenience stores shilling the treats in the United States.

In addition to the Day Of The Dozens, Krispy Kreme has lots of other treats up its sugar-dusted sleeve this holiday season. Special seasonal doughnuts currently on offer include the Santa’s Belly Doughnut, a chocolate cream-filled doughnut decorated to look like… well, Santa’s belly; the Ugly Sweater Doughnut, which dunks a doughnut in green icing and spangles it with confetti and reindeer and penguin candy pieces; the Holiday Plaid Doughnut, which dresses up an Original Glazed doughnut in festive red and green icing; and the Chocolate Iced with Sprinkles Doughnut, which gives a chocolate-iced treat a bit of holiday sparkle with special sprinkles. There’s also a Peppermint Mocha on the drinks menu this year, which you get hot, iced, or frozen.

I don’t know about you, but personally, I would like to jam each and every one of those treats into my face at the next possible opportunity — and today seems like as a good a day as any, since it means I can get even more doughnuts for a $1 if I include the seasonal specialties in my first dozen. Heck and yes.