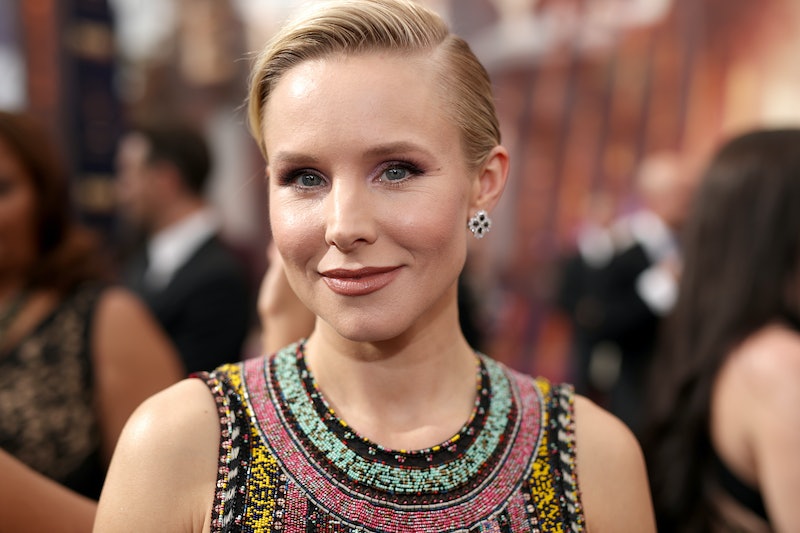 Hey, Upper East Siders, a familiar voice will be bringing you all of the hot goss when the Gossip Girl reboot arrives on HBO Max. Kristen Bell is returning as Gossip Girl's narrator for the upcoming 2020 series, according to The Hollywood Reporter. Bell previously voiced the character from 2007-2012 — although she only appeared onscreen once during a brief cameo in the series finale.

On Thursday, the reboot's producers issued a statement to THR about the casting that read: "Kristen Bell has always been and will always be the voice of Gossip Girl." Bell is the first original cast member to sign on for the reboot so far. And although executive producer Josh Schwartz told E! News in July that he's extended invitations to the original cast to make guest appearances, fans shouldn't get their hopes up for too many familiar faces to drop by.

The 10-episode reboot is set to focus on a new generation of students who begin to have their lives broadcast by the mysterious Gossip Girl. HBO Max's official description reads, "Eight years after the original website went dark, a new generation of New York private school teens are introduced to the social surveillance of Gossip Girl. The prestige series will address just how much social media — and the landscape of New York itself — has changed in the intervening years."

During an August appearance on Watch What Happens Live With Andy Cohen, Chace Crawford expressed interest in possibly appearing on the show as one of the father of one of the new characters. "It's great!" he said of the reboot. "I mean, I could maybe come back and play a father or something."

For now, Bell is the strongest link between the original series and the reboot as she prepares to narrate the dramas of the next generation of characters. In addition to the Gossip Girl reboot, The Good Place actor has several new projects in the pipeline including the new high school reunion/theater based reality series Encore! for Disney+, the children's series Do, Re & Mi, and the animated series Central Park for Apple TV+. Despite her busy schedules, she'll still be sending XOXO messages to the yet to be cast teens of the new series when it premieres in 2020.

More like this
How The Thanksgiving Episode Of 'Gossip Girl' Changed Pop Culture History
By Gabrielle Bondi
17 Photos Of The 'Wednesday' Cast Vs. The 1991 'Addams Family' Cast
By Grace Wehniainen
The 'Kenan & Kel' Reunion On 'SNL' Took A Dramatic Turn, Thanks To Keke Palmer
By Brad Witter
The First Trailer For 'That '90s Show' Includes So Many Nods To The Original Series
By Jack Irvin, Alyssa Lapid and Grace Wehniainen
Get Even More From Bustle — Sign Up For The Newsletter