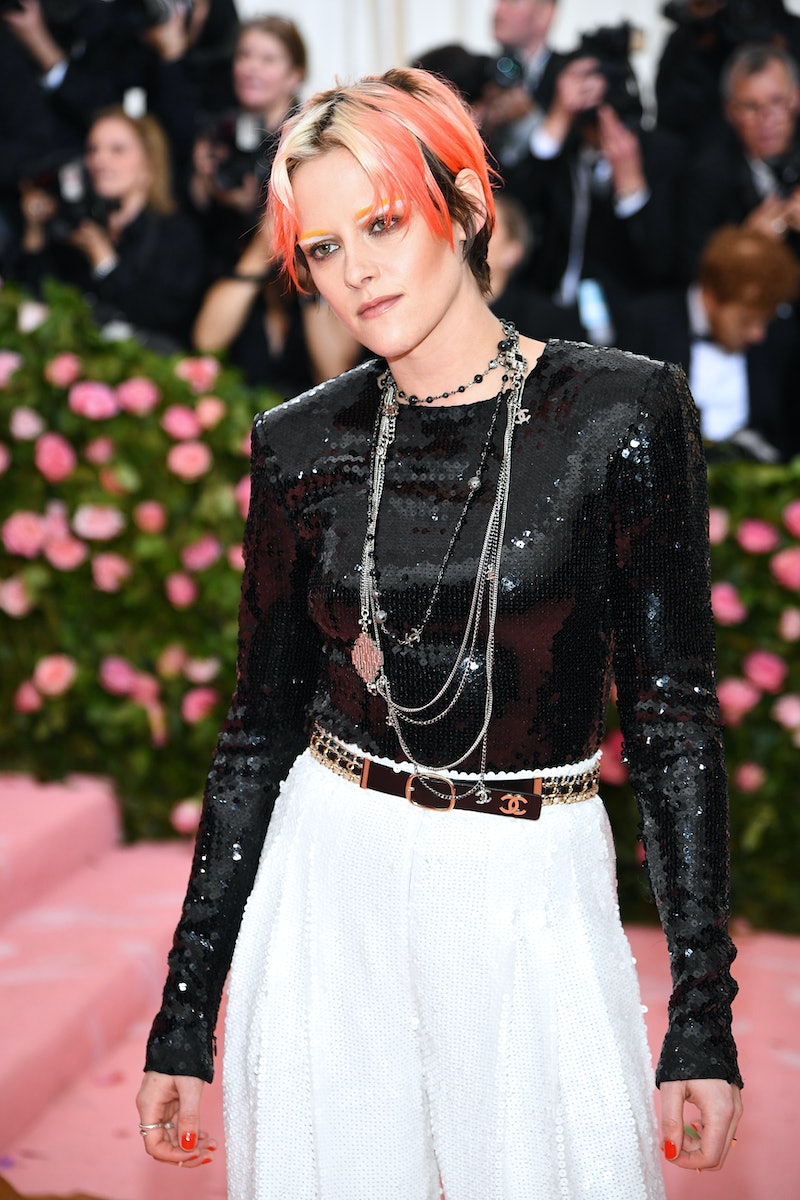 As anyone who has ever gotten ready for a big event fully knows, not everything always goes according to plan. In Kristen Stewart's case, her eyebrows changed into an unexpected color. Kristen Stewart's yellow brows for the Met Gala were a total accident. The bleach didn't turn out completely as expected.

The 2019 Met Gala's theme was “Camp: Notes on Fashion,” and guests were encouraged to dress in their most boundary-pushing and extravagant outfits. Stewart's look was inspired by the King of Camp himself, David Bowie.

"The inspiration was '70s Bowie and the obscurity of gender, playing into both masculine and feminine extremism," Stewart's hairstylist, Adir Abergel, said in a press release

According to The Cut, the specific look that Stewart was trying to channel was Bowie in The Man Who Fell to Earth. In the flick, Bowie had ginger hair that was floppy and center-parted. Bowie's hair color was more of a natural red shade in the movie, whereas Stewart went with a more punk version.

The varying shades in her short cut is where the eyebrow color change came in. Stewart's glam team included colorist Daniel Moon, who was the genius behind Kanye West's rainbow-tinged dye jobs. Moon decided to darken Stewart's roots and bleach her crown a more vibrant yellow. Moon then added in a neon red color throughout Stewart's shaggy '90s boy band cut, injecting some edge to her look.

Wanting to play off of the riot of color in Stewart's hair, her makeup artist decided to bleach her brows. The artist in question was Jillian Dempsey, and it was Stewart's first time coloring her arches.

Dye is a funny thing, and it doesn't always turn out as we planned. “I was so excited to de-virginize them,” Dempsey told The Cut. “I originally wanted to pop them out to a white color, but I removed the bleach prematurely and it was this cool banana color."

Rather than panic over the highlighter yellow color that Stewart saw in the mirror, she decided to embrace it. "Instead of toning it down, I just left them raw and punk," Dempsey said.

The glam team leaned into the accident, and decided to highlight the brows even further with makeup. To help the yellow color pop, Dempsey underlined Stewart's straight arches with a white pencil. She then gave Stewart a smokey eye using red and brown shades.

Specifically, Dempsey used Tile Red and Bronze Taupe from Chanel Les 4 Ombres palette in Blurry Mauve. Stewart is also an ambassador of Chanel, so it was a thoughtful connection.

Stewart and Dempsey then considered adding a bold lip to finish off the look. It would help to accent the yellow brows even more, but the two decided to forgo the choice. “That was one of our push-the-look moments,” Dempsey told The Cut. “I held a fuchsia in front of her mouth just to see it, then a red, and we were like, ‘Oh hell, no. It’s got to be a nude.’”

While the bleached brows didn't turn out as expected, Stewart's Met Gala look was a good lesson in being adaptable. Just because something doesn't turn out quite like we plan doesn't mean it isn't fierce as hell.