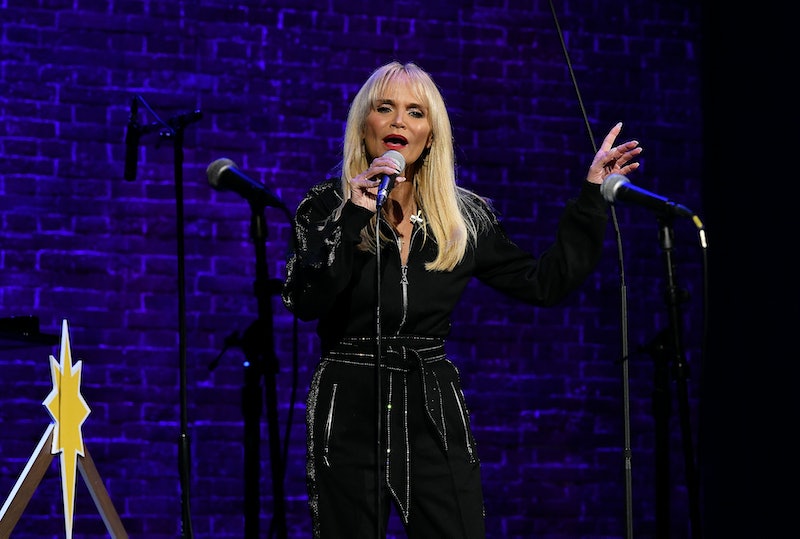 Hey, all you cool cats and kittens, are you ready to go to Broadway? Following in Joe Exotic's footsteps, Kristin Chenoweth dropped a Tiger King musical number about Carole Baskin, and, yes, it's just as wild as it sounds. Grammy and Tony-nominated Broadway composer Andrew Lippa unleashed "Little Pieces" in a lighthearted April 10 tweet. "Tiger cubs!!!! IT IS RISEN!" he wrote, adding that a music video will follow next week. "EAT YOUR LIVERS OUT!" For her part, Chenoweth simply replied: "Meeeeeooooowwwww."

The ode to Netflix's popular true crime docuseries is told from the perspective of Joe Exotic's longtime rival. Although it tackles the very serious allegations that Baskin murdered her husband Don Lewis, who went missing in 1997, and fed him to her tigers, the campy lyrics and infectious beat are all in good fun. (Baskin has long denied any involvement in Lewis' disappearance, though the case remains unsolved.) Lippa gave his followers a taste of the lyrics to the first "Little Pieces" chorus on April 9:

Lippa, who's been collaborating with Chenoweth for more than two decades, had been jokingly teasing the track from his upcoming TIGER KING: The Musical (A Parody!) on Twitter. He also claimed that the singer is going to win an Oscar for "singing and acting and INHABITING the role of Carole B." It's all a quarantine dream for now, but with this song, Chenoweth has definitely laid claim on the role of Baskin should a Tiger King musical ever bless us.

Either way, Chenoweth isn't the only celebrity creating her own Tiger King content. Jenny McCarthy and Donnie Wahlberg shared their Tiger King TikTok parody video on April 2. SNL star Kate McKinnon is also executive producing and starring as Baskin in a Tiger King-centered limited series. Meanwhile, Rob Lowe — dressed in a Joe Exotic costume — claimed in an April 5 Instagram post that he and Ryan Murphy are developing their own scripted Tiger King adaptation. Though he is far from the only actor lobbying to play Joe Exotic on the big or small screen.

This is one Netflix hit that isn't going away anytime soon.