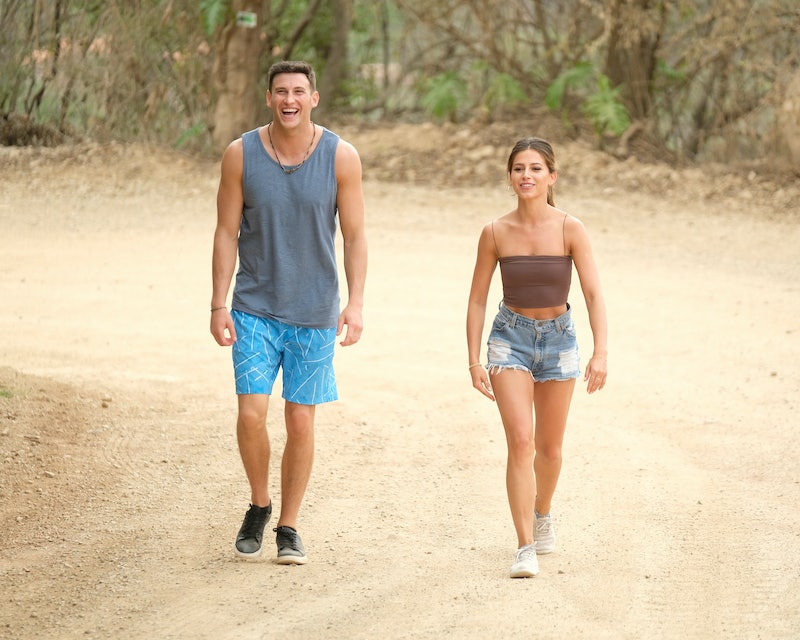 Kristina Schulman and Blake Horstmann may have parted ways as just friends on the beaches of Mexico this week, but Kristina's recent remarks about Blake after Bachelor in Paradise prove that despite the end of their romance they still remain extremely close to each other. In fact, the former Bachelor contestant came to her friend's defense while speaking with Entertainment Tonight during the filming of the reunion episode, which will air next Tuesday. Kristina revealed how much Blake felt betrayed by many of his friends and BiP cast members shortly after the episodes from Season 6 began to air.

"I'm supporting him because I think he needs it. He's had so many people be supportive of him and be there as his friend, but when the show started airing, he didn't see a majority of those people," Kristina explained, according to ET. "So, he feels a form of betrayal and that nobody was there for him." She went on to say that, "I just continue as someone to hold his hand and show that, 'Hey, I've been here for you for a year.'"

So while friendship may still be the only thing in the cards for this particular duo, it's nice that despite all of the drama and hurt feelings that were brought to light throughout the season, these two still have each other's backs at the end of the day.

Blake's Paradise journey did not get off to a great start. Shortly after the main cast arrived, Caelynn accused Blake of misleading her earlier in the year about where their relationship was going and claimed that he had asked her to keep their Stagecoach hookup a secret from everyone during their time in Mexico. It was also revealed that Blake had slept with Kristina at Stagecoach as well while also actively pursuing Hannah G.

On Aug. 6, Blake decided to share his private text messages with Caelynn in an attempt to defend himself against the allegations she was making against him on the show. This, in turn, caused him to face a great deal of backlash outside of the show since many felt his actions were a direct violation of Caelynn's privacy.

But despite Kristina's initial intention to make him pay for his poor judgement and disappointing behavior prior to Paradise, she still couldn't help but feel bad for him by the end of it all. "I haven't seen him in this position ever before, and it was hard to watch, but I think it's his position to say [if he was in a dark place]," Kristina told ET. Though, according to the outlet, there was one person who claimed to have reached out to Blake outside of Paradise besides Kristina: BiP fan favorite, Derek Peth.

"I talked to Blake a little bit the past few months to say, 'Look, we love you, we know you're not a bad person and give support,'" Derek said. "I wasn’t aware that he was going to release the text messages. I think he's got some growth to go through and full faith that he actually will."

Blake may not have gotten the happy ending he was hoping for in Paradise, but with friends like these, hopefully he can grow from this experience and find someone right for him down the line.