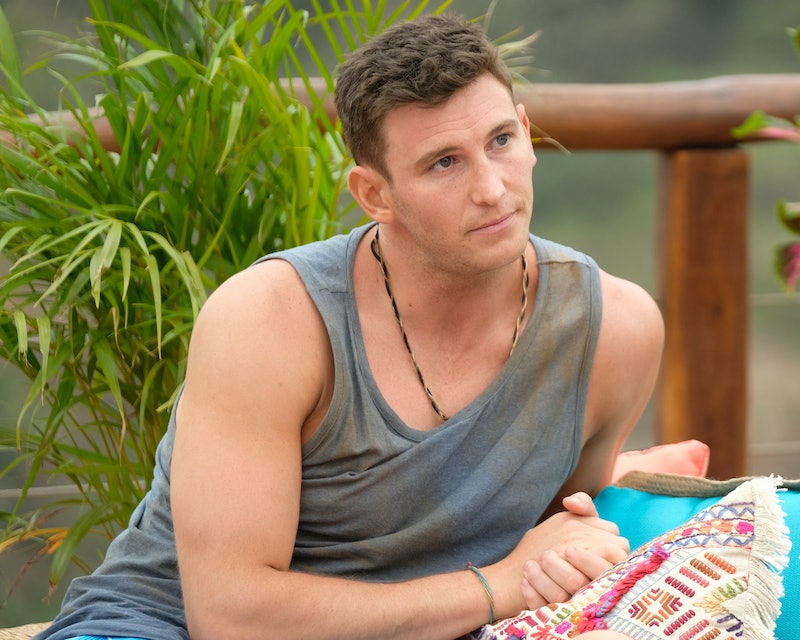 The two-night premiere of Bachelor in Paradise kicked off with plenty of drama, and at the center of the storm was Blake Horstmann, who got called out by multiple BiP cast members for hooking up with them in between seasons. And after Caelynn Miller-Keyes accused him of "ghosting" her and calling her a "mistake" on the Aug. 6 episode, Blake released texts from Caelynn on Instagram, and he may have made things on Paradise much worse.

On Tuesday night's episode of Bachelor in Paradise, Caelynn confronted Blake over how he treated her after their hookup at the Stagecoach Festival in April. She claimed that she had believed that they were on their way to a relationship and accused Blake of asking her to keep their past a secret so that he could enjoy Paradise. However, after the episode aired, Blake responded to Caelynn with a lengthy Instagram post, claiming that he never ghosted her, and that she knew their hookup was not a part of a larger relationship. And to prove it, he decided to release text messages between the two of them, uploading supposed texts from Caelynn to his Instagram story. (Bustle reached out to both Blake and Caelynn for comment about the texts but had not received a response at the time of publication.)

Though he said he wanted to just share his "truth," Blake's decision to share private texts is a major violation of privacy. Just because Caelynn signed up to be on multiple reality shows, that doesn't mean she consented to have her personal text messages shared on the internet. Furthermore, the texts that Blake released don't exactly contradict Caelynn's claims; she said they hooked up at Stagecoach during their reported relationship, which is clear in the texts, per Entetainment Tonight. They also both shared their anxieties over having to address their hookup and Blake's relationships with other contestants in Paradise, which lines up with their conversations in Mexico.

Blake explained his reasoning for sharing the private text messages with an emotional video on his Instagram Story. "Releasing these text messages was the last thing I wanted to do," he said, adding that he felt he had "no other choice" in order to try and defend the "attacks" against his name and character. "I hope Caelynn can forgive me one day," Blake added, noting that he didn't release the messages to "attack" her, but, "I'm just trying to get my truth out there."

He also admitted that there was a chance that Caelynn's comments on the show were "spliced together," from various interviews with producers, and that he hoped she could clarify her comments. However, in the early hours of Wednesday morning on Aug. 7, Blake announced on his Instagram Story that he would be deleting the texts from his Instagram, explaining, "I never wanted Caelynn to get attacked like this. Please stop attacking her."

What makes Blake's decision to release private text messages to the public so disappointing, other than the clear violation of trust, is that everything he needed to say about the situation came across in his Instagram post. In his initial statement, Blake apologized, writing that he takes "full responsibility" for his actions during Stagecoach weekend, while also refuting many of Caelynn's claims.

"I NEVER 'sweet talked' her at Stagecoach," he wrote. "Caelynn and I were NEVER in a relationship. I NEVER ghosted Caelynn, I NEVER called her a mistake and I absolutely NEVER EVER EVER silenced Caelynn."

The message was already very clear, so posting the texts simply made the situation much more dramatic and invited fans to attack Caelynn. It also invited other members of Bachelor Nation who weren't involved in the drama to comment and take sides, making things even more complicated.

While fans would likely be disappointed if Bachelor in Paradise wasn't filled with drama, the situation between Blake and Caelynn has gone beyond what happens in Mexico. With the release of these texts, the drama has officially crossed over into the real world, and that's something that neither Blake nor Caelynn wanted.