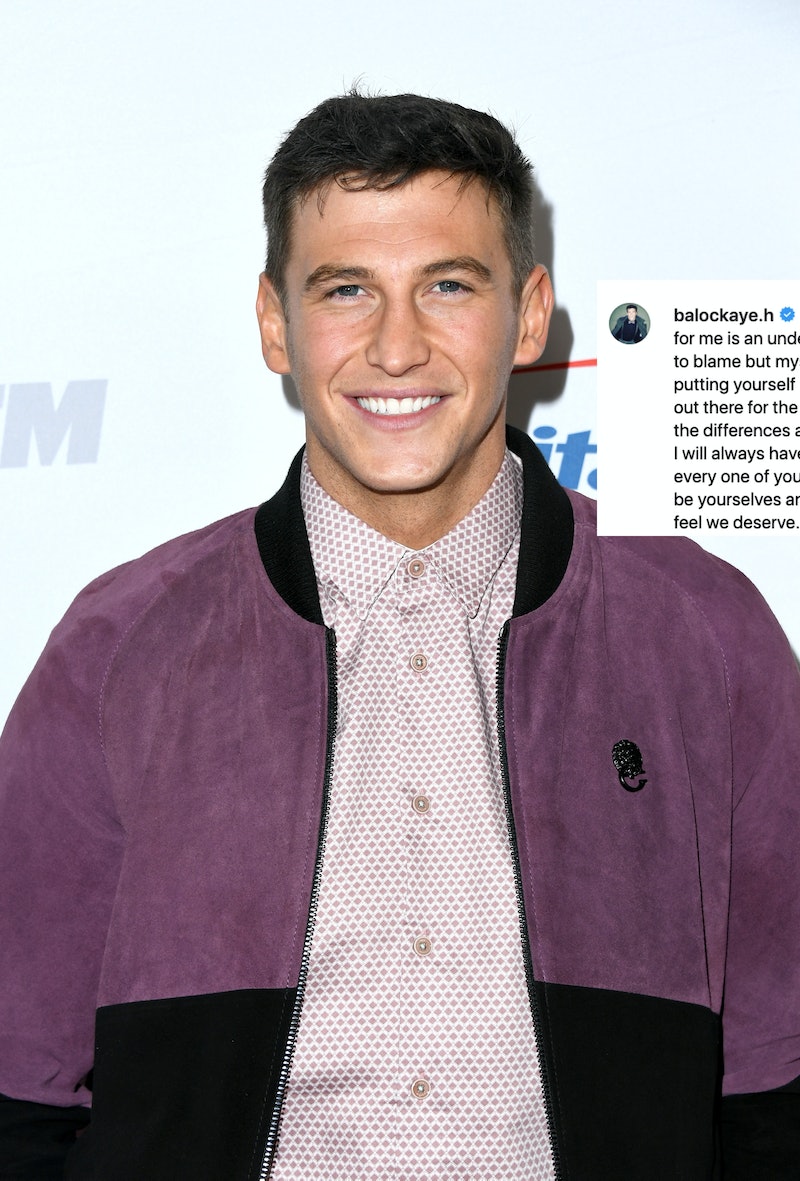 Bachelor in Paradise is winding down for the season, but on Monday night, one contestant decided to end his time on the beach a little early. After realizing that it wasn't going to work between him and former flame Kristina Schulman, Blake Horstmann left Bachelor in Paradise, knowing that this late in the season, love just wasn't in the cards for him. And now, he's coming clean about what it was like for him. After the episode aired, Blake shared an Instagram post about his BiP experience, giving fans a little insight into where his head is at after filming for the show.

Sharing a photo of himself in the ocean as the sun set in the distance, Blake opened up about the "rough" season he'd just survived, reminding his followers that he and everyone else on the show is simply human. He wrote:

"To say paradise was rough for me is an understatement. I have no one to blame but myself for that. It’s not easy putting yourself and all of your mistakes out there for the world to see. No matter the differences all of us had on that beach, I will always have respect for each and every one of you, being brave enough to be yourselves and chase the love we all feel we deserve. Never forget that we are all human and not characters on television."

He went on to thank fans who had showed support for him this season, ending his post on a hopeful note. "I want to thank those of you that have sent me kind words and encouraging messages," he continued. "Those have helped more than you will ever know. I hope that this is not the end of my story and I can look back at this summer and be grateful for the lessons learned and the friends made."

And despite everything that's happened, it seems Blake still has a sense of humor about the whole thing, because he added a hashtag at the end: "#imstillgoingtostagecoach."

As soon as the season premiered, Blake immediately came under fire for his history with Caelynn and Kristina before the show. Caelynn claimed Blake had ghosted her after making plans to be in a real relationship instead of going on the show (which Blake denied, releasing text messages he and Caelynn exchanged before filming), while Kristina was upset that he'd been seeing Caelynn at the same time he was seeing her — and all of this happened around the time they were all at a little music festival called Stagecoach. It doesn't sound like Blake's going to let it stop him from enjoying the music in the future, though.

Several of Blake's fellow Bachelor alum also commented on the post, sharing their support for him — including a joke from Ben Higgins that Blake should be going to a "wedding festival" instead of Stagecoach.

Chris Bukowski, Haley Ferguson, and Jason Tartick all weighed in, too.

This season of BiP was definitely not Blake's finest moment, but it looks like he's learned a lot from the experience. Things may not have worked out with Kristina (or anyone else) on the beach, but hopefully, he'll have better luck now that the cameras are no longer rolling.