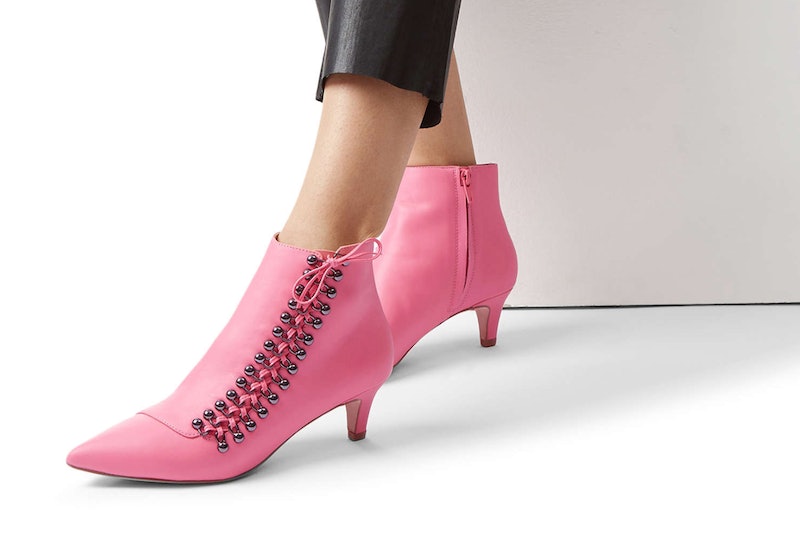 Every so often, a new It product comes around. It could be a bag, a coat, or even a pair of shoes. No matter what the item is, it's sure to be a sell-out, appearing on celebrities, influencers, and fashion week attendees. That's exactly what has happened with Kurt Geiger's Rita boots.

The '60s-style design was spotted on the feet of numerous people at the London Fashion Week earlier this month. And according to Kurt Geirger, online sales of the shoe have increased by 675 percent in the past week alone, reports the Daily Mail.

So why is everyone so obsessed with a simple pair of boots? Well, they look pretty comfy. Unlike many towering boots on the market, the Rita comes with a dainty kitten heel. Although some people aren't a fan of the look, the obvious advantage is that you have little chance of toppling over.

The ankle boots — which come in white, black, and pink — also feature a vintage-esque lace-up detail. The eyelet and hooks run all the way up one side, lending a Victorian element to the sleek shoe. If you're not a fan of tying laces, don't panic. The boots have an almost unnoticeable zip on the inside to make your life easier.

For some people, the only downside may be the price. These babies will set you back £199. Considering the fact that you can pair them with pretty much anything (including billowing dresses, retro trousers, and mini skirts), that figure may not bother you too much. It's all about cost-per-wear, right?

If you're in the mood for the Rita boots, you may want to hurry. Every colour in UK size 2 to 8 is still in stock on the Kurt Geiger and Selfridges site, but probably not for long. (Some sizes may also be available in store.)

But if the price has put you right off, there are some cheaper high street alternatives.

Not feeling the '60s vibe? These leather Office boots take inspiration from a later decade. With an '80s silhouette in a stark white shade, they'll be the talk of your WhatsApp group. Unfortunately, the only sizes left online are a UK 3 and 4, but you might have more luck in store.

These boots have the smallest kitten heel known to man, but are ideal for when you want to dress up a casual outfit. And they're sold in an actual supermarket. Available in UK size 3 to 8.

This red pair are almost identical to the Ritas, except for the lack of lacing. The stretchy cuff at the top is an added comfort bonus. Available in UK size 3 to 8.

Get into the pirate spirit with these buckled boots. Housed in Kurt Geiger's Carvela line, the shoes are subtly adorned with pearls and finished with a leather zip. Available in UK size 3 to 8.

No shoe round-up is complete without an animal print option. This red velvet pair have an identical shape to the Ritas and will add a pop of colour to any all-black ensemble in your wardrobe. Available in UK size 3 to 8.

It's official: the kitten heel is back with a vengeance.