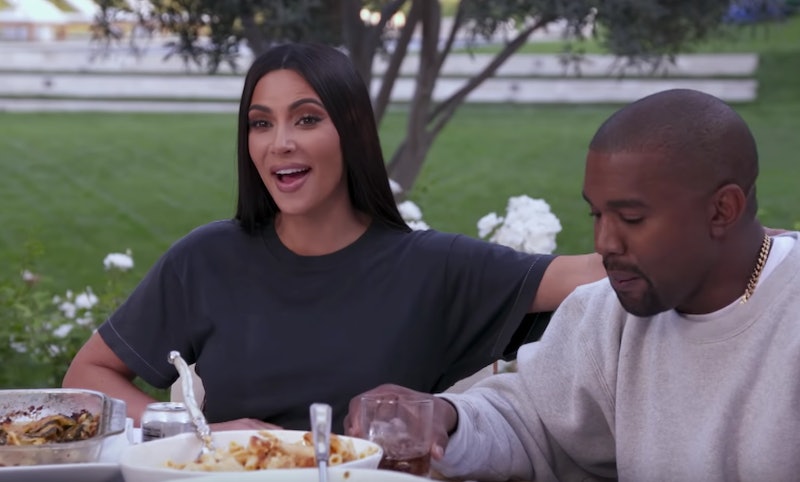 In 2007 when the Kardashian family started their reality show, Keeping Up With the Kardashians, they probably couldn't have guessed just how difficult keeping up with the family really would become. Over the past month or so the family has dominated the tabloids after the scandal involving Kylie Jenner's BFF Jordyn Woods and Khloe Kardashian's boyfriend Tristan Thompson broke in on Feb. 19. On Monday night, Kim Kardashian and Kourtney Kardashian posted photos from the Keeping Up With the Kardashians Season 16 wrap party, so the chances that the drama surrounding Woods and Thompson will unfold during the new season — which premieres March 31 on E! — seem high.

The snaps that Kim and Kourtney posted on their Instagram stories late Monday night, on March 11, showed the two sisters and their families celebrating the season's end at a roller rink. Kim took videos of herself skating along to the music, her husband Kanye West rolled on by on an electric longboard. In one video, likely recorded by Kourtney or another family member, Kim and Kanye skated ahead, holding hands while Beyonce's "7/11" played in the background. It was basically a middle school birthday party, and it seemed like the perfect way for the family to celebrate yet another season's end.

According to People, Kris Jenner and the family signed a contract with E! which renewed the reality show for five more seasons in 2017. At the time, KUWTK was in the middle of its 14th season, so fans can expect the show to last at least until Season 19.

The fact that Kim and Kourtney celebrated the wrap party this week presumably implies that the famous family has been filming Season 16 of Keeping Up With the Kardashians until this moment. In other words, the cameras might have been rolling throughout the entire fallout from the rumors that Thompson cheated on Khloe with Woods, which means fans could get a closer look at the drama when the new season airs.

In fact, the timing of the scandal, which broke a little over a month before the premiere of Season 16, had some raising questions as to its authenticity. A recent article published by Refinery29 pointed out how common it is for a big Kardashian story to break right before a new season airs. For example, the announcements that Kim and Khloe were both pregnant came out just before Season 14 of KUWTK, per Refinery29. That said, it could all be a coincidence.

Regardless of whether or not Thompson's reported hookup with Jenner's BFF was leaked to the media from inside the Kardashian/Jenner camp, fans of Keeping Up will surely want to watch the drama unfold in Season 16. In late February when the surprising party hookup allegedly took place, a source told Us Weekly that the family was already filming Season 16 at the time. The drama was definitely caught on camera, but according to Us, the source claimed, "It’s unclear what they’ll actually end up using."

Seeing as the Keeping Up stars tend to maintain transparency on the E! reality show, if the cameras were in fact rolling when the rumors about Woods and Thompson began, it will most likely end up unfolding before your eyes on Season 16.