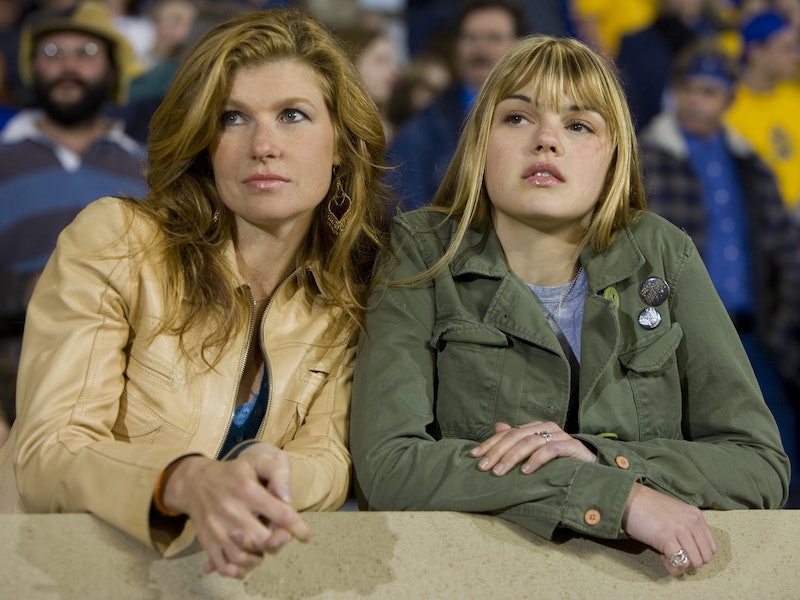 When the conversation turns to the great television dramas of all time, NBC's small-town Texas sports saga Friday Night Lights tends to be a part of it. The show transcended its surface subject matter, the rich characters and sincere Americana appealing as much to people who wouldn't have been caught dead at a high school gridiron match-up as it did to those who were in the stands every week. The series premiered over 10 years ago, but FNL still comes up on a regular basis in the life of Aimee Teegarden, who played Coach Taylor's stubborn daughter Julie. As the actor tells Bustle while promoting her new movie Rings, the endurance of the show's heart and impact on pop culture fulfill a prophecy of sorts made by her TV dad.

"I remember Kyle Chandler would be on set sometimes and look around at us and just be like, 'you kids have no idea how good you have it,'" Teegarden says. Chandler would know; before he doled out tough love in the career-defining role of Eric Taylor, he worked on plenty of other TV series, including Early Edition and the Joan Cusack sitcom What About Joan? What he wanted Teegarden and the other young actors who were breaking out on Friday Night Lights to understand, she recalls, is that they were a part of creating something new, genuine, and sophisticated in a medium that rarely saw such storytelling. [I'm still grateful] for "being a part of that and knowing that it can exist and does exist," Teegarden says.

Friday Night Lights contributed hugely to the rise of "peak TV," i.e. the movement towards producing ambitious work with strong voices that challenged tired formats. For Teegarden, the high quality standards of Friday Night Lights were expressed through the "creative freedom" afforded to the team, the "attention to detail" evident in every episode, and a refusal to underestimate the audience, she says. And though she left the role of Julie behind when FNL ended in 2011, Teegarden adds that won't mind if you ever run into her and decide to bring it up. Someone wants to talk about Dillon, Texas with the actor pretty much every day, including the day that she spoke with Bustle.

"I was just in Starbucks an hour ago and the guy running the counter was like, “Oh my god! Were you on Friday Night Lights?” Teegarden recalls, mimicking his excitement. "'I used to watch with my family! I've got to call my dad!'" Far from being an annoyance, encounters like this remind Teegarden of just how many people her work on FNL touched. "To see on his face what [Friday Night Lights] meant to him and his family is such a cool thing that I get to experience," she says. "I was like, 'That’s amazing! I can just go back into bed today, I’m done.'"

Just like you, it seems Teegarden will always be nostalgic for the era of FNL.