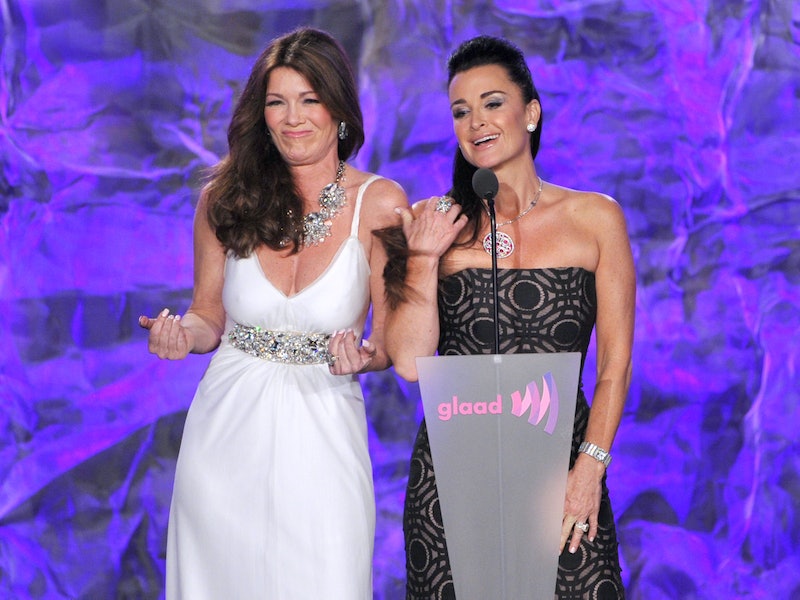 The Real Housewives of Beverly Hills has had a rocky ninth season, what with Lisa Vanderpump leaving the show fairly early on. Vanderpump hasn't appeared on the Housewives in weeks, and it's been confirmed that she will not appear on the show's reunion, so it really is over. Well, at least for now. While attending a premiere party for MTV's The Hills: New Beginnings last week, Kyle Richards hinted that Lisa Vanderpump might return to 'RHOBH' while sending a message to her former fellow Housewife.

"I think she's done for now," Richards told Entertainment Tonight. When ET's Katie Krause asked if that means Vanderpump will be back, Richards said, "I don't know, I think you never know." It really seems like Richards doesn't know whether Vanderpump will be back, especially since the two RHOBH stars aren't talking. Just because the two friends, arguably one of the tightest duos in Housewives history, haven't mended their rift that spawned out of "Puppygate," that doesn't mean there's no hope for reconciliation.

When asked what Richards would say to Vanderpump now, the American Woman creator said, "I always wish Lisa the best. I know that she may not feel that, because of everything that's gone on this season, but I have a lot of respect for Lisa. I care about her very much. You know, we had a lot of fun together, and I really wish her the best! I think she's amazing at what she does with her restaurants and bars, so I wish her continued success and health and happiness." Then Richards added, "That’s how I really feel, so hopefully that’s the high road."

After not speaking to each other for months, US Weekly reported that in early May Richards and Vanderpump ran into each other. "It was OK," Vanderpump said, which is a major improvement to what Vanderpump said about Richards in a blog in April. According to US Weekly, that blog post said of Richards, "She threw our relationship down the toilet and I flushed it!"

During a recent appearance on Bravo's Watch What Happens Live, a caller asked Richards if she thinks her friendship with Vanderpump would have remained intact if Richards had stayed out of the Season 9 dog drama. "Yes I do, however we're supposed to be honest and have an opinion, and I felt like I was being honest in that moment and even though Lisa and I have known each other the longest and are close, I'm friends with all these women and have respect for all of them," Richards said.

Vanderpump hasn't responded to Richards' comments, but she's got a lot on her plate at the moment. Sadly, on June 17, Vanderpump's 84 year-old mother had passed away in England. And the Daily Mail reported that she plans to take a break from filming Vanderpump Rules. On Tuesday, Vanderpump broke her social media silence with a tweet vaguely referenced the RHOBH drama. "Life is so fragile and I have no time for negativity," the reality star tweeted. Richards hasn't mentioned Vanderpump or her recent loss on social media.

Even though Vanderpump hasn't spoken so kindly of Richards as the later has of Vanderpump, the relationship may have hope yet. Perhaps Vanderpump will turn to Richards while grieving the loss of her mother in weeks to come — it seems like Richards is open to mending their friendship, at least.