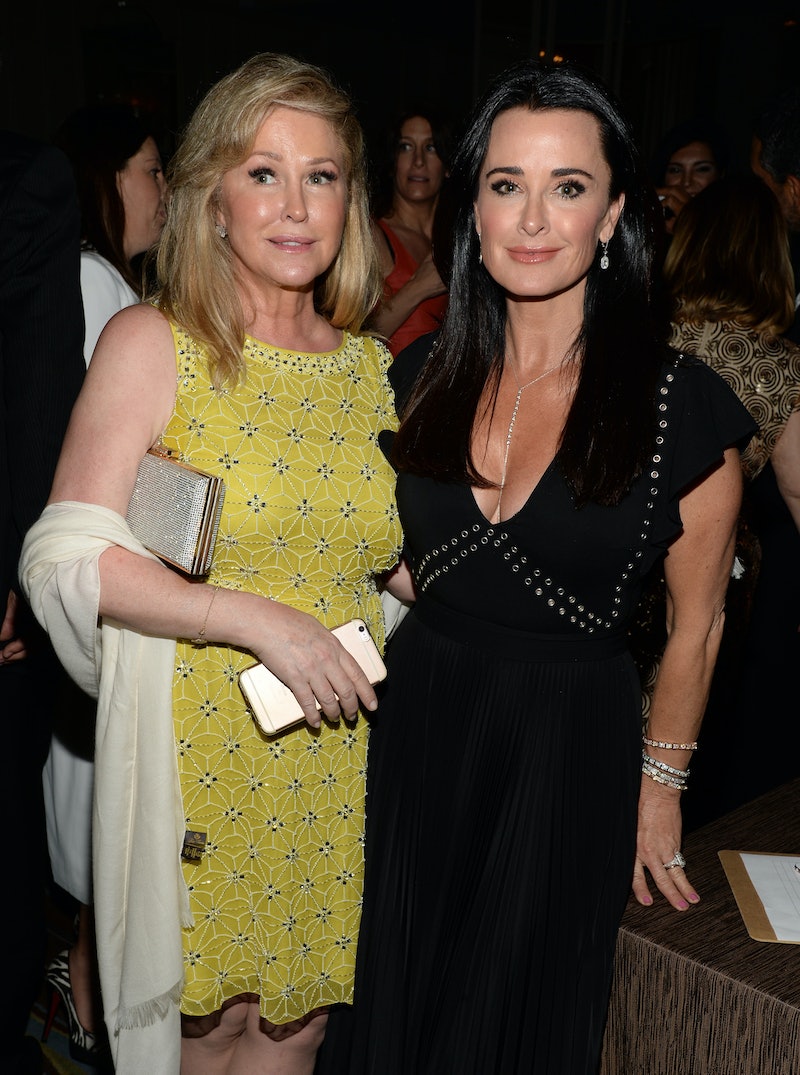 Bravo is in the market for a new Housewife, and, as it turns out, Kyle Richards is totally open to Real Housewives of Beverly Hills becoming a sister act once more. Richards addressed RHOBH casting rumors about Kathy Hilton on the Watch What Happens Live with Andy Cohen after show Tuesday, June 11, and she was pretty positive about the whole thing.

When asked by a caller about the speculation, Richards revealed, "I would be happy if my sister [joined]. I've had one sister on [Kim Richards]. Why not have another sister on?" She added that Hilton could inject some unexpected humor into the show. "People don't know this, [but] she's one of the funniest people there is," Richards said. "She's a practical joker, and she's very, very funny. So I think she'd be an amazing Housewife, actually."

Sounds promising, but if Hilton is joining the cast, she isn't letting on just yet. On Sunday, June 9, Hilton posted a video of herself to Instagram giving an interesting haircut with the caption, "Rumors of me joining the Beverly Hills Housewives would interfere with my real job of cutting hair." Of course, she was kidding, but there is some truth to the idea that joining the RHOBH cast would be a major commitment, not to mention a major life changer.

The idea of Hilton entering the RHOBH fold began when Bozzi posted a photo of Cohen and Hilton to Instagram on Saturday, June 8. He captioned the picture, "Sign on the dotted line... a true diamond in Beverly Hills.. @kathyhilton! #RHOBH! @bravoandy GoodNight LA6/7/19," alongside a few diamond emojis. Naturally, Bravo fans imaginations went into overdrive with potential taglines and storylines involving Hilton.

So, with the sister seal of approval and a pretty suggestive Instagram post from Bruce Bozzi, one of Cohen's best friends, could Hilton's Housewife status be a done deal? Not so fast. Cohen also chimed in on the after show to clarify reports of him "courting" Hilton for Season 10 of RHOBH. "The truth is, I went to Mr Chow in Beverly Hills and Kathy was at the table next to us," Cohen told his viewers about a chance meeting with Richards' sister in the days after LVP's exit. "We took a photo together, which is how that whole [thing started]. Never say never!"

The timing of the post was also cause for conversation as it came after a major week of RHOBH drama. It was confirmed that not only was Lisa Vanderpump leaving the show, but that she'd be skipping the Season 9 reunion altogether. Regarding her departure, LVP told Extra:

"The last year was a very negative year for me. I feel like we're moving forward. They have had their resolution. I just had a horrible time with the show and the women. It was a very sad time in my life and it wasn't made any better. I just decided to walk away."

No announcements have been made yet as to who might take Vanderpump's coveted Real Housewives slot, and Bravo could be merely testing the waters on Hilton joining the cast. On Monday, June 10, Cohen addressed the possibility of Hilton joining the show on his SiriusXM show Radio Andy. Though he maintained he had nothing to do with the photo being posted, he also admitted, "I will say, I was amazed by how positive, overwhelmingly positive, the response to this (Hilton joining the show) was. People were really into it."

At this point, Hilton joining Real Housewives of Beverly Hills is merely being teased. But her diamond status could be concerned ahead of Season 10 filming.