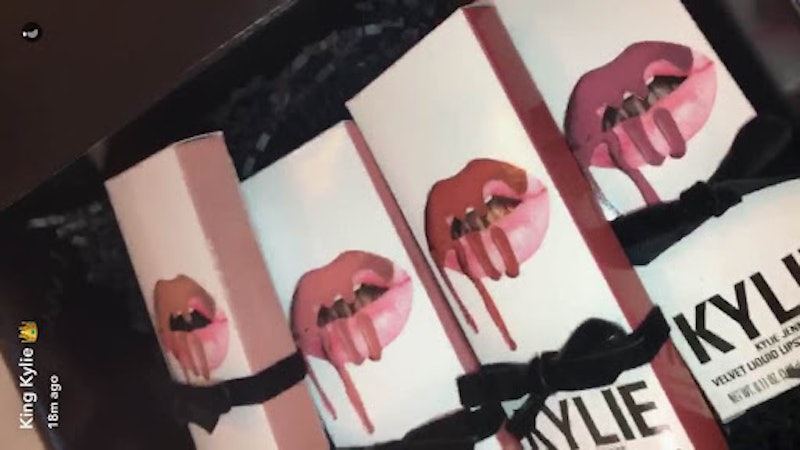 Kylie Jenner is back at it again. While the cosmetics mogul has launched several new makeup products recently (like her Kylighters and blushes), it's been quite some time since she added a new lip kit formula to the family, until now. On Friday night, Jenner announced her newest creation: Kylie Cosmetics' Velvet Liquid Lip Kits, and based on the swatches, you're going to want to set an alarm for when Jenner makes them available to buy.

In true King Kylie fashion, Jenner took to Snapchat to share her big surprise late on a Friday night. In the video, Jenner tells her followers that she just got back to her house and thought it'd be a good time to tell everyone what she's been working on. That's when she revealed the news that she has a brand new lip kit that she thinks her fans will "die" over.

According to Jenner, the Kylie Cosmetics Velvet Liquid Lipstick was made for her customers who don't love a matte lip. With summer fast approaching, it makes sense to create a lip formula that's creamy, but more pigmented than her lip glosses, and from what I can see, that's exactly what she has in store for shoppers.

There are four lip kit shades in the collection: Charm, Harmony, Dazzle, and Rosie (from left to right).

The packaging looks similar to the rest of her lip kits, but the formula is sure to be different from her matte, metallic, and gloss lippies.

As for when the lip kits launch, fans won't have to wait long.

Mark your calendars for March 16 and set your alarms to 3pm PT, Kylie Cosmetics fam!