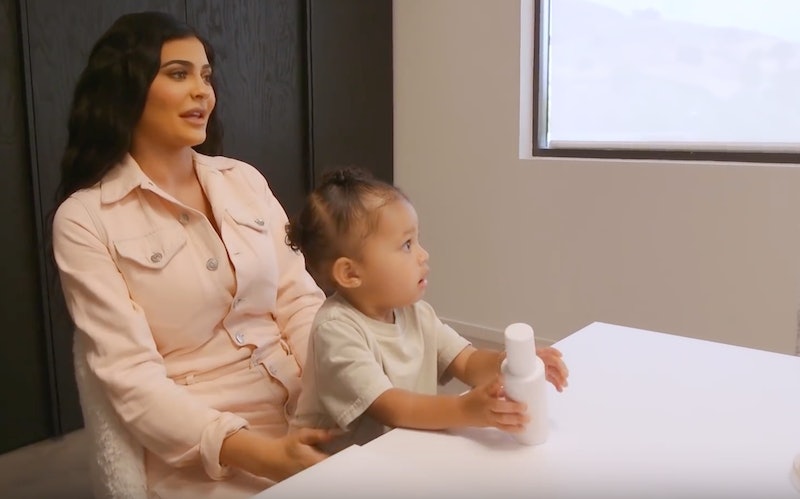 Have you ever wondered what happens during a day in the life of Kylie Jenner? What does the 21-year-old billionaire really do all day? On June 3, she shared a video on her YouTube page documenting her day from start to finish. As revealed in the video, Jenner balances motherhood and work by bringing Stormi into the office.

Not only that, but Stormi literally sits in on meetings — from her mother's lap, of course. How long until she starts sharing her suggestions? Let's be honest. It is only a matter of time until there's a Jenner and Stormi collaboration for Kylie Cosmetics.

Initially, the video detailed Jenner getting herself and Stormi ready for the day ahead. In between picking out both of their outfits, she answered messages from her family group chat with her mother and siblings. Then it was off to her pink hued office for a Kylie Cosmetics meeting, KylieSkin meeting, a mysterious meeting that she did not record on camera, and a photoshoot for new lip kit colors.

Sometimes the young mom has to choose between work and her daughter. Other times, she manages both at the exact same time. Jenner makes decisions about marketing, product packaging, and launch dates with Stormi right there at the office.

On that particular day, Stormi spent the morning playing at a farm with her cousins. Later, she showed up while her mom was mid-meeting. Before sitting in on the meeting, Stormi drove around the hallway in her toy car that she keeps "parked" at the office. Jenner claimed, "Stormi is in all my meetings," which seems plausible given how comfortable Stormi looked at the head of the table.

Then, Jenner showed her fans where Stormi hangs out when she is not in a meeting with the staff. The Kylie Cosmetics founder explained, "It's hard to manage mom life and work life sometimes. That's why I made her a bedroom here. She can be with me and still have fun."

Stormi wasn't the only family member who popped in that day. When Jenner showed up, her mom Kris was already sitting there, eating a Chinese chicken salad before their meeting together.

Jenner attempted to explain that she was filming a vlog, but the momager just couldn't pick up what she was laying down. Instead, she called it a "blog" and then a "glog," before Jenner gave up and continued on with her busy day.

Jenner's older sister Kendall turned up for their own meeting. The siblings have a collaboration in the works. Neither of them divulged exactly what they've been working on, but there were some context clues during the meeting.

Kendall put on makeup with a brush in front of a little mirror. And at another point they discussed the "color for the components." Whatever they're working on might have the word "Kendall" on it in gold or black.

For the most part, the video focused on Jenner's efforts to balance business and motherhood, but it did end with a surprise birthday dinner that Jenner planned for good friend and makeup artist Ariel Tejada.

For Jenner, it's "take your daughter to work day" every day that it's possible. She has a pretty packed schedule, but makes sure that she fits in time with her family and friends, whether it's in the office or out.