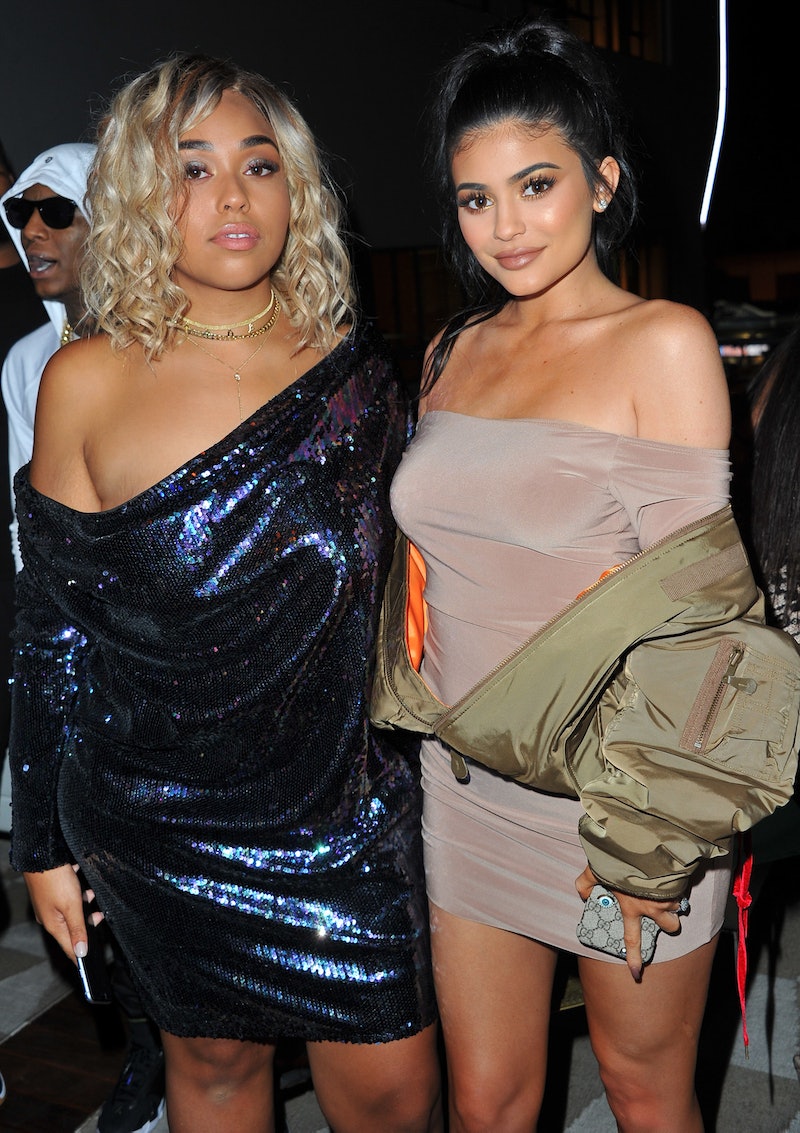 Although Kylie Jenner hasn't been spotted with Jordyn Woods since the Khloé Kardashian and Tristan Thompson scandal, fans have been following the pair's every move on social media. On April 29, Kylie Jenner removed a photo with Jordyn Woods from her Twitter header, according to an article from People. And of course, the internet couldn't help but notice.

The previous photo with Woods was promoting their makeup collaboration for Kylie Cosmetics. The makeup mogul replaced that with another promotional picture. It's now an advertisement for her new Kybrow product launch. In actuality, the switch was technically business-related, but, of course, there's some speculation that it was more personal than professional.

That's because of Woods' association with the Kardashian and Thompson split. In February, Hollywood Unlocked claimed that Thompson reportedly cheated on Kardashian with Woods at an afterparty he hosted at his Los Angeles home. Woods denied getting intimate with the basketball player during a March interview with Jada Pinkett Smith for Red Table Talk. (Bustle previously reached out to reps for Woods, Kardashian, and Thompson for comment, but did not hear back.)

As of right now, Jenner is still following Woods on Instagram, but there has been plenty of curiosity about the status of their relationship. One reason is that the "Jordy" lip kit went on sale for 50% off on the Kylie Cosmetics website around that time. Right away, there were rumors that it was in direct response to Woods' supposed role in the Thompson scandal.

However, in a March 30 interview with the New York Times, Jenner addressed the price reduction. The makeup mogul actually didn't know about the sale until it became a headline. She called one of her employees and it turns out that the lip kit was put on sale a couple weeks prior because of a switch in the packaging.

Jenner told the Times, "That is just not my character. I would never do something like that and when I saw it, I was like, thrown back." She maintained, "Jordyn knows I didn’t actually put it on sale." Nevertheless, that didn't stop people from joking about it.

On Feb. 26, Page Six reported on some lipstick reviews poking fun at the scandal. One person wrote, "amazing lip kit for stealing my bff’s sisters boyfriend!" Another reviewed, "THIS SHADE SMELLS LIKE BETRAYAL." Then, another customer directly addressed the price reduction, writing, "The shade of betrayal never looked so good! Thankfully Kylie is slashing prices in half since betrayal is cheap."

While Jenner previously denied any personal reasons behind her professional decisions, Woods has kept it pretty positive as well. On April 18, TMZ cameras caught up with Woods and her mom at the airport. When asked about the possibility of resurrecting her relationship with her former bestie, Woods said, "I have love for everyone, always."

Her mom even chimed in with a more concrete statement, telling the paparazzi, "We love Kylie."

It's quite a contrast watching the duo go from constantly posting with each other to nothing at all. Still, at this point, it feels like there are just a lot of people looking for drama when there isn't any there.

Jenner has products to sell. Of course, she's going to change her Twitter photo and slash prices on lipsticks with outdated packaging. She didn't become a billionaire by accident. She knows exactly what she's doing when it comes to marketing. After all, who else makes headlines for changing a background photo on Twitter?