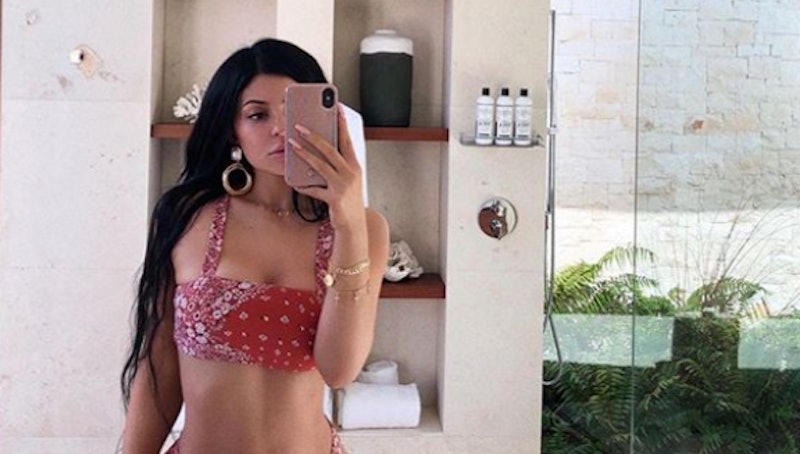 Kylie Jenner is always a source of inspiration when it comes to the wardrobe, and that includes swimwear. The beauty mogul posted a throwback vacation photo on her Instagram, where Jenner wore a bandana bikini that looked straight out of the '90s. And now you can buy the two-piece on Amazon.

On April 18, Jenner posted a mirror selfie with the caption "throwback vacation vibes." The picture seems to be from the trip she took with her daughter, Stormi, and former best friend Jordyn Woods earlier this year. The group of ladies went to Turks & Caico in honor of Stormi's first birthday, and the week was filled with cute swimsuits and yacht photo shoots.

One of the bathing suits that Jenner packed for the seaside resort getaway was a red bandana-print bikini. The suit in question had definite '90s vibes, where the top was similar to the iconic bandana halter Beyoncé wore during a Destiny's Child concert.

While Jenner is known for her expensive and designer tastes, this particular bikini is pretty affordable. The piece comes from Onia x We Wore What's capsule collection (offered in sizes XS to XL.) The popular travel wear brand collaborated with blogger Danielle Bernstein of We Wore What, and the duo created a Western-inspired swimsuit line.

Specifically, Jenner wore the Rosy Bikini Top and the Delila Bikini Bottom. Both options are available to shop on Onia, but if you have free two-day Amazon shipping, you can also snap up the set on Amazon.

The Rosy Bikini Top is meant to be a sexier version of a tube top, and it has a bust enhancing shape along with delicate shoulder straps. The collection's theme is "modern reimaginings of Western-inspired style," and the bandana has definite cowboy vibes. But the swimsuit top also has a strong '90s look, giving the shopper the best of both worlds.

While it's a cute bikini to go to the beach in, the top is also chic enough to wear on its own to a festival. One shopper shared in a review that they wore it to Stagecoach, the country music festival.

The Delila Bikini Bottoms are cut high with cheeky back coverage. They resemble the high cut suits that were popular in the '90s, where the hips are highlighted. The briefs have a V-contoured waistband, and in Jenner's photo you can see that the bottoms sit high on the waist.

Jenner donned another Onia x We Wore What bathing suit on the trip, but this time it was a one-piece. The suit in question was the much talked-about cowhide print bathing suit.

The bathing suit had a sweetheart neckline, Western belt tie, and a bustier bra. While that bathing suit is no longer available, there is a similar bikini version in the We Wore What collection that costs the same as the bandana bikini.

Even though summer has not officially hit yet, Jenner has fashion lovers already plotting out their beach and vacation getaway looks. Get your bandana fix before it all sells out.