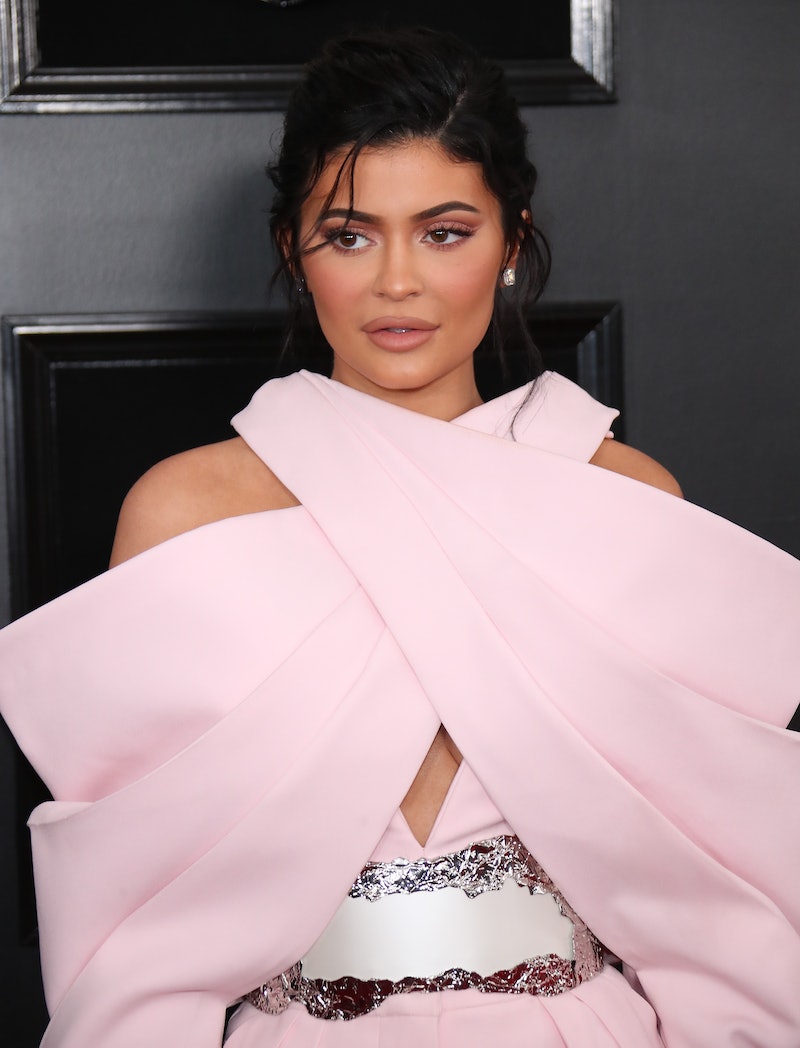 It's not a Kardashian-Jenner brithday without a multi-themed, theme park party. On Saturday, Feb. 1, Kylie Jenner celebrated Stormi Webster's 2nd birthday by throwing her daughter an extravagant "Stormi World" bash for the second year in a row. Jenner hosted the event along with Stormi's father Travis Scott, and somehow, the two managed make the birthday party even more spectacular than the year before, summing up the event with the motto: "Stormi World 2 is better than 1."

Stormi World, which is becoming an annual tradition, is inspired by Scott's Astroworld album and tour. However, Scott and Jenner filled their daughter's party with a few of her favorite things, including separate areas for Trolls, Frozen, and Stormi-themed activities. Jenner even printed maps for guests, who entered the party through an inflatable grand entrance shaped like her daughter's head. Kim Kardashian, Khloé Kardashian, and Kendall Jenner attended the bash, and all three sisters posted a picture of the dramatic entrance on their Instagram Story, according to People.

Meanwhile, Jenner documented the extravaganza on her own Instagram Story, exclaiming, "another party!" in front of the gate. "I want to go inside," Stormi responded. On Instagram, Jenner also posted a video with Khloé driving to the party, writing, "Take us to StormiWorld, please."

Once inside, guests were given the option to visit different themed areas of the event, with a sign pointing individuals toward a Frozen, Trolls, or Stormi World section of the party.

The Trolls section included sparkling trees, and on her Instagram Story, Khloé documented one of the Trolls costumes, complete with the character's iconic big hair.

In addition to meeting some of their favorite film characters, there were carnival games for guests to enjoy, including a light-up ball pit in the shape of letters which spelled out Stormi's name. Kim also shared a photo of an inflatable carnival slide on her Instagram Story, which was complete with rainbows and another enormous Stormi face.

The main draw in the Stormi World party was likely the theme-park, which featured a flying Dumbo ride with lights. Khloé posted a video of herself on the ride with her niece Dream Kardashian, her brother Rob's daughter. She shared a second video of her riding with her daughter True, proving that the Kar-Jenner kids were living their best life at Storm World II.

Other guests at the party included famous friends such as Hailey Baldwin, Chrissy Teigen, and John Legend, according to People. Teigen posted a video from the party with Legend and daughter Luna on her Instagram Story, writing, "@kyliejenner uhhhhh omfg."

On her Instagram Story, Teigen also showed Legend wandering with Luna into the Frozen area of the party, which featured Elsa and a snow-globe making station.

The characters were surely a nice treat for the kids, but no Kardashian-Jenner birthday party is complete without an elaborate array of desserts. Stormi World II was no different. On her IG Story, Jenner posted a photo of a three-tier Stormi Webster birthday cake and a table of rainbow sweets.

Jenner's celebrations seem to be getting more elaborate each year, and it's hard to imagine what might be in store for Stormi's third birthday party. Given how the makeup mogul managed to pull of an entire theme park for the second year in the row, she'll no doubt accept the challenge to make Stormi World III the best bash yet.