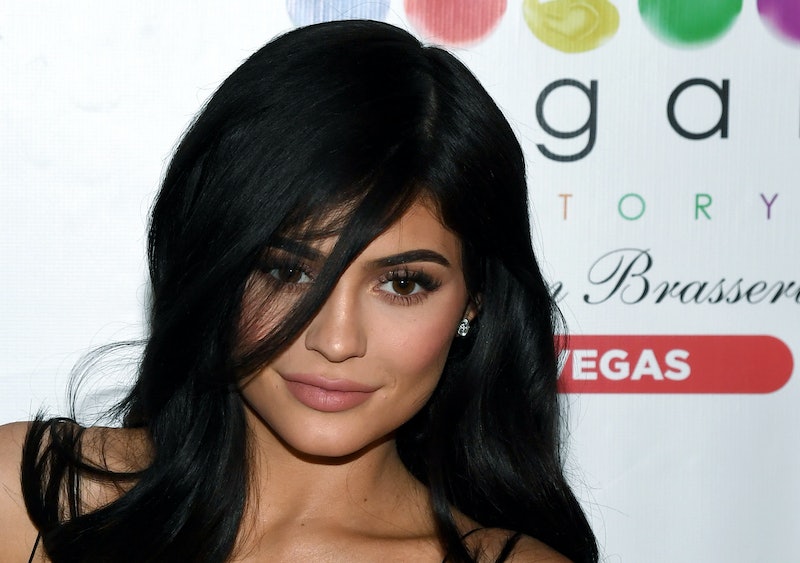 Prepare to be super jealous of a toddler, because these photos from Stormi Webster's first birthday party might be the most extra thing you see all year. That may be a bold statement to make in February, but Kylie Jenner's Instagram Stories from the big event will make you a believer. When was the last time you entered a birthday party via a giant, blowup replica of your own head? Because Stormi just did that yesterday.

Officially, Stormi turned one on Feb. 1, but Kylie and Travis Scott waited until Feb. 9 to throw their daughter the party to end all parties. Dubbed "Stormi World" — a play on Scott's Astroworld tour — the carnival-themed bash included a bubble room, official merch, carnival rides and games, and even themed trashcans. And Kylie documented every jaw-dropping bit of decor for the world to see.

Unsurprisingly, fans on Twitter are wondering if their invite to Stormi World got lost in the mail. Twitter user @meaganrosewrite wrote, "I may not be a friend of the Jenners or rich or live in California but the fact that I wasn't invited to #stormiworld still hurts." Another user, @AnisaPatriciaJ, tweeted, "Idc who you are, if you aren't wishing you’d been invited to #StormiWorld than you are simply #not it."

The lucky people who were invited appear to have had a blast. Guests who showed up to celebrate Stormi's special day included her grandmother, Kris Jenner, aunts Kim Kardashian, Khloé Kardashian, and Kourtney Kardashian, and her mom's best friend Jordyn Woods, who got to carry the family's newly adopted puppy. That's right, in addition to having a full blown carnival to enjoy, Stormi also got to play with a puppy at her party too — no one can say this kid isn't living her best life.

In order to gain entrance to Stormi World, guests had to walk through a giant blowup of the toddler's head. Sounds weird, but it's actually an homage to her dad's Astroworld tour.

Kylie did not hold back on the decor. From clouds to fairy greeters and a butterfly forest, every detail came together to create a dreamy vibe befitting a first birthday celebration.

Stormi's grandmother, Kris, was all about the carnival rides. Whether she was making sure her granddaughter, Dream, held on during their carousal ride, or taking a solo spin, she earned major cool points.

Kourtney's son Mason, Khloé's daughter True, and Stormi looked adorable as they posed with the carnival prizes. And yes, it does appear that at a Kardashian carnival every prize is the coveted giant bear.

In addition to the stunning carousal cake and sweets, guests were also treated to fries, mini pizzas, and drinks all branded with the Stormi World label.

It's hard to say who was more excited about the live "Baby Shark" performance — Stormi or her parents.

Come on, you know you want some of Stormi's cool birthday merch.

From straws that spelled out Stormi's name (as modeled by Mason) to trashcans sporting the Stormi World label, the attention to detail that went into creating the party is incredible.

Yes, the over the top decorations are cool, and the food looks divine, but nothing could top the adorable family moments. Because right now, Stormi's world is her parents, cousins, aunts, and uncle, and there's clearly lots of love behind all of the extravagance.

Now, the only question left is, what will Kylie do to top Stormi's first birthday? Because she just set the bar sky high.

More like this
Kylie Jenner Goes Into Labor & Welcomes Her Baby On 'The Kardashians'
By Jake Viswanath
Confusion Reigns After Kanye Changes His Instagram Profile Pic To Kris Jenner
By Jake Viswanath
The Try Guys Cheating Scandal, Explained
By Grace Wehniainen
Dixie D’Amelio & Noah Beck “Love Each Other” Despite Breakup Rumors
By Julia Emmanuele, Jordyn Tilchen and Grace Wehniainen
Get Even More From Bustle — Sign Up For The Newsletter