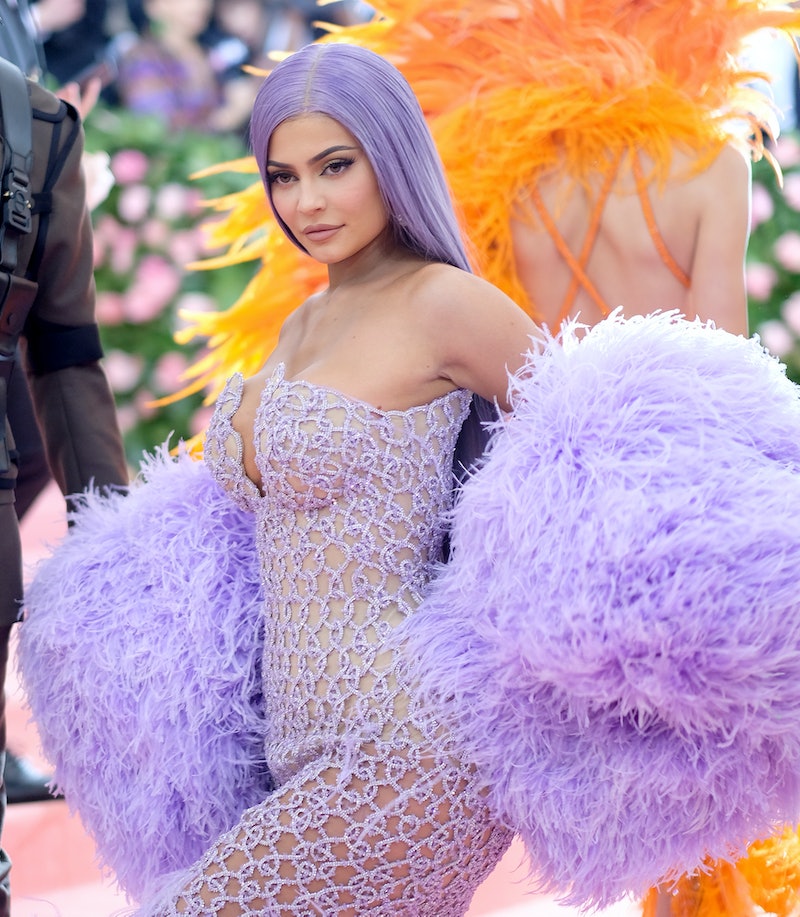 Today is another day and another hair change. Apparently, celebrities can't stop, won't stop, but who really wants them to, anyway? The latest new look is Kylie Jenner's bob, and while she's rocked the style before, this time, the youngest member of the Kardashian clan is serving serious Kim Kardashian West vibes.

On Oct. 7, Jenner uploaded a photo of herself with one of her multitude of cars in order to welcome the first day of the week. No, really, she captioned the image, "Hello Monday," with a black heart. In the photo, Jenner just so happens to be sporting a new blunt bob.

Posing by the open door of the vehicle, the Kylie Cosmetics mogul is wearing some serious early aughts style denim. The high-rise, flared jeans in black featured rust-colored distressing down the front and of course, on the butt. She paired the '00's-inspired pants with a matching cropped denim jacket with the same sort of fading. Jenner looks like a walking, old school Jordache ad.

It's not the ensemble that's giving Kim Kardashian West vibes, though. It's the bob. Jenner isn't a stranger to the hair cut. In fact, she's had it a few times, but big sister Kardashian also just wore the look making this pair seem more like style twins than ever.

For the past few weeks, the beauty brand owner's hair has been in its typical look: long and dark. Before her post from Oct. 8, Jenner's blunt bob was last seen during the announcement of her Kylie Cosmetics x Balmain collection. In the campaign images, Jenner poses with Balmain creative director Olivier Rousteing while wearing the collection with the short, curled-under bob.

As for an IRL wear, Jenner posted a selfie rocking the same cut on Sept. 17, and it could have been a twinning moment with Kardashian West.

Jenner's last post with her bob almost perfectly coincides with the most recent moment that Kardashian had the look as well. On Sept. 13, just a few days before Jenner uploaded the above selfie, Kardashian West premiered not one but two bob haircuts in a single day.

Kardashian appeared on NBC's Today Show where she showcased the new look, even getting a compliment from host Hoda Kotb. Only a few hours later, though, hair stylist Chris Appleton had convinced the KKW Beauty owner to chop her bob once more. When she appeared at the S by Serena fashion show (Serena Williams' clothing line) later than evening, her bob was even shorter.

The September bobs, if they coincided, won't even be the first time the sisters have twinned with the haircut. In November of last year, Jenner and Kardashian came together with their two beauty brands to launch a new KKW x Kylie collection that consisted of four new lippies. It just so happens that in the campaign for the collection, Kardashian and Jenner twinned in, you guessed it, blunt bobs.

While Kardashian West appears to have "cold brew" long locks at the moment, could Jenner's blunt bob be a sign that her bob is about to make a comeback as well? Only time will tell, but one thing is certain. These sisters love a good matching haircut.

More like this
8 Gorgeous Hair & Makeup Moments From The 2022 American Music Awards
By Audrey Noble
Dua Lipa On YSL Beauty, Plus Her Fearless Approach To Hair & Makeup
By Erin Stovall
This Week’s New Makeup Releases & More Beauty Headlines
By Audrey Noble
The 117 Best Black Friday Beauty Deals Of 2022 To Shop
By Audrey Noble
Get Even More From Bustle — Sign Up For The Newsletter