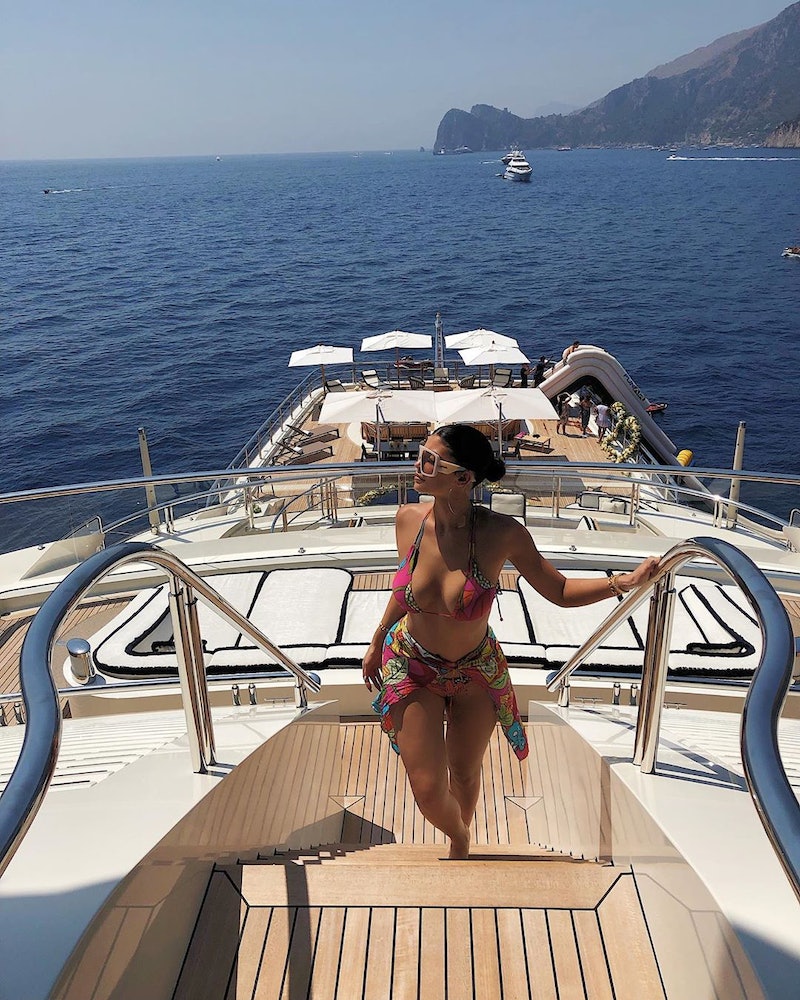 Kylie Jenner is celebrating her birthday in Italy because well, she's Kylie Jenner and can do that. While there, she's been rocking incredible bikinis and even twinned with daughter Stormi. The best style moment, though, may be Kylie Jenner's sunglasses that are bigger than her entire face. That's not an exaggeration. Jenner wore the biggest sunnies you've probably ever seen while in Italy, and while they might be good for sun protection, they're probably not great for tan lines.

In an Instagram photo posted both she and photographer Amber Asaly's account, Jenner was rocking all Dior everything on part of her trip. While the hot pink, printed bikini and sarong she wore was great, the massive sunnies that covered her entire face were definitely the star of the show.

In the photo, Jenner is looking straight at the camera while her hands hold out a giant pair of hoop earrings, and while the hoops may be big, the sunglasses she's sporting are even bigger. The Dior glasses are reminiscent of shield sunnies, but the difference is the thick, light pink frames that run along the lenses and across the bridge of Jenner's nose. The frames begin just above Jenner's brows, extend all the way to the sides of her face, and end well below her nose just before her famous lips. So yes, that's basically her entire face.

In her post, Jenner captioned the image with "summer19" with a strawberry, cherry, and watermelon emoji. Like the photo of her swimsuit, Dior was tagged in the photo of the sunnies. If you want to make a major splurge on a pair of glasses, Jenner's Dior sunglasses are still available to shop on the luxury label's website.

The Kylie Cosmetics mogul's glasses appear to be the Dior So Light 1 Sunglasses. They're currently up for grabs for the cool price of $425. But hey, with the size of these glasses, you're definitely getting the most bang for your buck, right?

While Jenner may have chosen to rock the world's most massive pair of glasses while on her birthday vacation, not all of the reality star and brand owner's accessory choices are about oversized pieces (though her Kylie necklace from her Kylie Cosmetics Birthday Collection shoot may have you thinking otherwise).

Back in April, Jenner attended the last night of Coachella, and what's Coachella without a killer outfit? For her trip, Jenner wore a nude illusion mini dress covered in rhinestones and complete with blue rhinestone gloves attached to the dress by garters. While obviously a dress that made the star look like she was covered in rhinestones is major, Jenner's tiny purse is proof that her accessory choices aren't always about over the top looks.

The bag, designed by Gelareh Mizrahi, was only as big as Jenner's palm, and other than a single key and a chapstick, there's not a whole lot that would have fit inside. Regardless of its functionality, though, the tiny purse was super on trend, and Jenner rocked it.

While Kylie Jenner's Dior sunglasses may have been a total statement piece during her Italian birthday vacation, this style star knows how to rock tons of different trends. From tiny purses to hew name in diamonds around her neck, don't underestimate Jenner's accessory game.