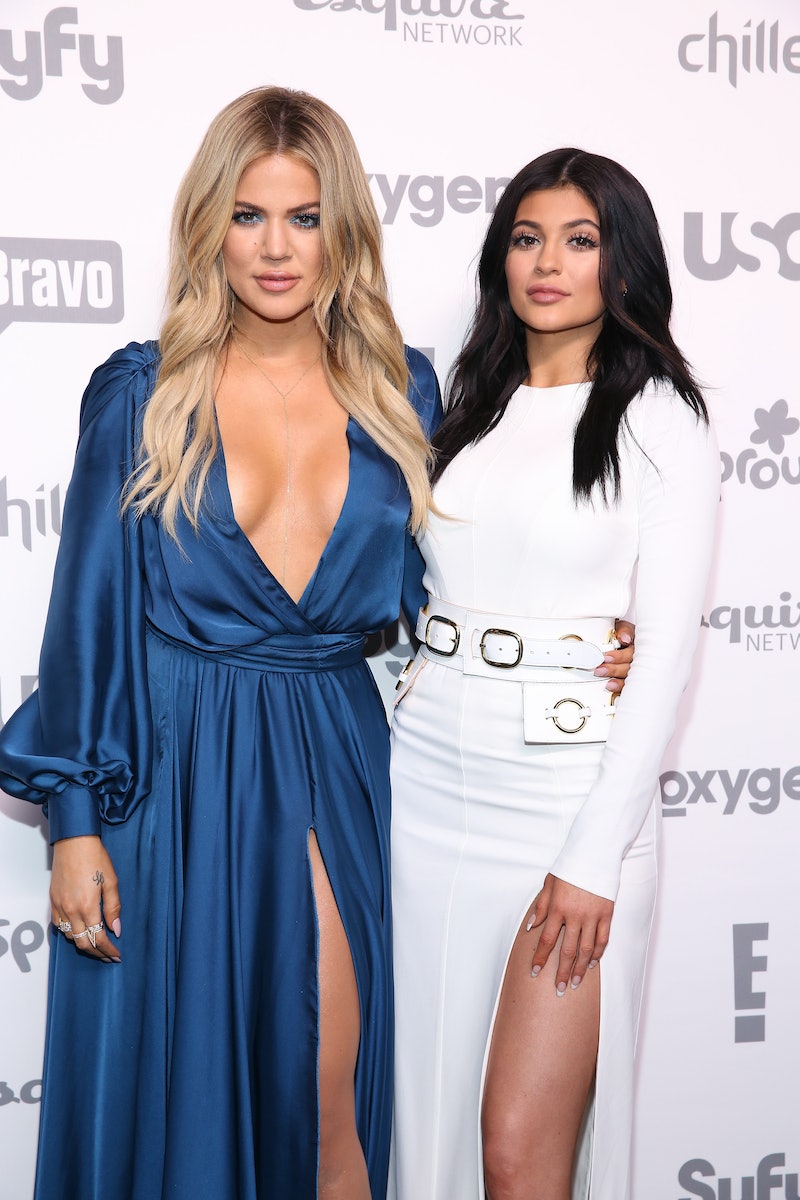 Most can only dream of what it's like to dress up for a celebrity-hosted party, as invites are usually exclusive to select people. However, if it's a Kardashian-Jenner extravaganza, then your best bet to impress is to come equipped with a pint-sized version of yourself. Kylie and Khloe dressed up in matching outfits with their babies for the KarJenner-hosted Christmas Eve Party, and they basically stole the whole night as far as fashion goes.

Any party where there's a Kardashian or a Jenner in attendance is bound to include some jaw-dropping looks. In the case of Christmas, though, the two newest moms of the pack donned matching festive ensembles. Khloe sported a long-sleeve snowflake print crop-top and a high-low tulle skirt while baby True opted for an additional snowflake head wrap to match her "mommy and me" top.

Since it was Christmas Eve, Kylie went for something with a little more shine. The youngest Jenner slipped into a nude, sleeveless floor-length fitted gown covered in crystlas for the festivities. Kylie's daughter Stormi wore a matching sparkly nude onesie.

Most people don't want to dress exactly like their parents (especially not for the holidays), but most people's parents also don't dress like a KarJenner.

"I have always looked forward to our annual Christmas Eve party but this year was hands down my favorite!! True, you make everything so much more precious and memorable!! I will forever love and remember our custom made GORGEOUS party outfits by @monicaivena"

Khloe and True's looks were made by designer Monica Ivena, who's pretty crafty at designing bridal gowns. It's clear Khloe pulled out all the tricks to ensure their duo went down in the fashion history books.

Kylie posted her mother-daughter looks to Instagram with a simple "Merry Christmas" wishes, but there was nothing simple about her and Stormi's looks. Along with their sparkly outfits, Kylie wore white and see-through pumps while she dressed Stormi in a pair of white Nike's.

Although Kylie left the party early, as she mentioned on her Instagram Stories, to put Stormi to bed, she and her daughter know how to leave a party in style.

Being that this is both of the sisters' first Christmas being a new mom, there's no reason as to why they shouldn't go all the way off with their toddlers in tiaras and Louboutins.

This is probably going to considered the Christmas party of the year, but who else would really take the crown? The winter wonderland Christmas Eve bash was hosted at big sis Kim's house at her and Kanye's Beverly Hills home that featured sledding in fake snow and just a totally casual performance by John Legend.

If there's anything fans know best about the Kardashian and Jenner families, it's that there's no such thing as small get togethers and to go out twinning in style with your baby for next year's Christmas party.