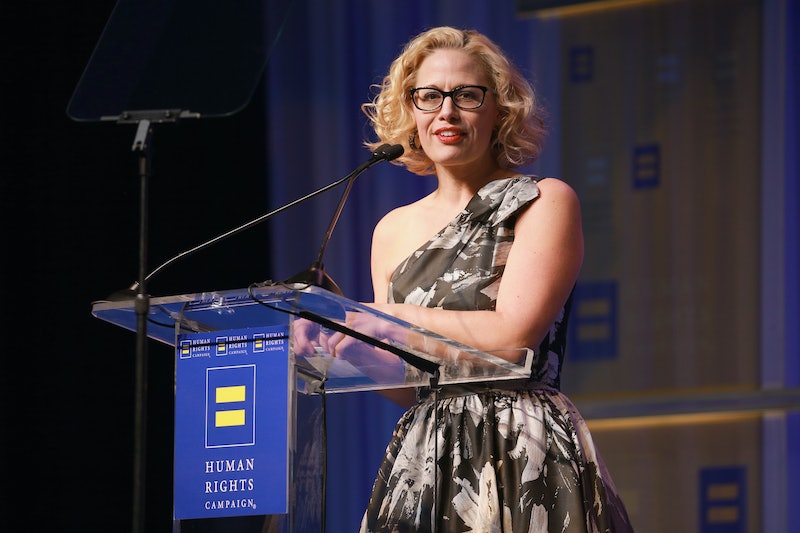 The dust from the Arizona senatorial race has finally settled, and in the end, the Democratic candidate won a come-from-behind victory. Besides just giving the Democrats another seat in the Republican-controlled Senate, though, Kyrsten Sinema's Arizona Senate win was historic in several other ways.

"Very happy to say I’m no longer the *only* openly LGBTQ U.S. Senator," tweeted Wisconsin Sen. Tammy Baldwin, who became the first openly gay senator in U.S. history in 2012, according to CNN. "Congratulations to @kyrstensinema on a well-deserved victory. The upper chamber is lucky to have your steady leadership."

After nearly a week of vote counting, Sinema's victory finally became official on Monday evening, according to The New York Times.

In her victory speech, Sinema struck a unifying note and didn't emphasize how her win was so historic. Instead, she focused on her promises of bipartisan work and the legacy of an important former Arizona senator: John McCain.

"A few months ago, we lost a legend who exemplified that spirit and all the best of Arizona. His example shines a light on the way forward," Sinema said. "Sen. McCain is irreplaceable, but his example will guide our next steps forward. He taught us to always assume the best in others, to seek compromise instead of sewing division, and to always put country ahead of party."

Sinema came into the Arizona race as the more moderate candidate, basing her campaign on that bipartisan approach, as The Washington Post wrote. Her opponent Martha McSally, who conceded in a phone call on Monday before posting a tweet congratulating Sinema for her victory, had embraced President Donald Trump and his agenda, according to the Post.

In addition to the historic nature of her victory, having Sinema in the Senate is also a huge success for the Democrats in this particular election cycle. As Vox explained, Democrats had long hoped that Arizona would provide more fertile ground for the party, and this is a major sign that their hope isn't in vain. Currently, the split in the Senate is 51 confirmed Republican seats, 47 confirmed Democratic seats, and two seats yet to be determined. After the recount in Florida is complete and the run-off for Mississippi's special election takes place on Nov. 27, then the country can finally stop holding its breath over the 2018 midterms.